Oh Victory, what a tremulant history we have shared.  They are that entry level brewery that engages your interest, then you outgrow, but then you embrace again when you are done moralizing and giving a fuck.  Victory Brewing is kinda like that uncle who did sleight of hand magic and always invited you over to his studio apartment, but then later you found out it was because your uncle was on house arrest for petty theft.  Eventually you come full circle and realize your uncle is pretty kick ass, despite his larcenous trappings.

So Victory is hazarding a branding reboot of sorts, embracing their first canned offering, and bridging the gap to a more accessible consumer base from what I can gather.  I mean look at this shit: 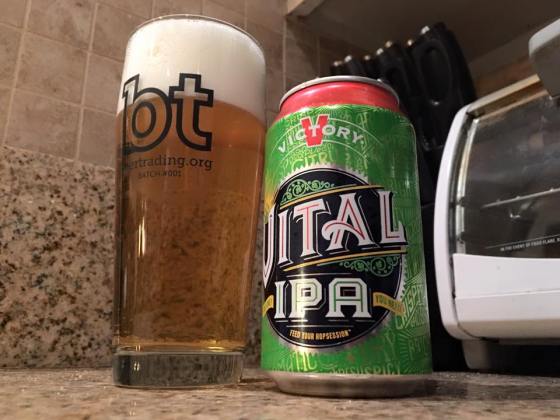 Embedded adjectives like a TGI Fridays menu and shit.

One thing you cant deny is a pretty fucking legit IPA 6 pack for $9.99.  That was the reason I loved DIRT WOLF but price alone cannot be Victory’s savior because Hop Ranch was a bag of pulverized chive and garlic nutsacks. So where does this one stack up between those two polar opposites? Eh, somewhere in between, falling closer to the Dirtwolf awesomeness.

The press release is fucking hilarious and makes me wish I wrote copy for this No Fear t-shirt designer turned beer mogul: “WHETHER YOU ARE LOOKING TO RELIEVE A STRESSFUL DAY, TOAST TO ONE OF LIFE’S MANY VICTORIES…REACH FOR THAT WHICH IS VITAL TO ALL FIVE SENSES IN EVERY SENSE OF THE WORD.” Go ice your boner down and continue reading.

So how does this taste? It appears to have subacriomial bursitis and a rotator cuff tear from patting itself on the back at release.  The look is admittedly awesome, that radiant hue with a touch of hay and light orange like when a Filipino dude decides that he would look good with bleached hair.

The nose follows suit and doesn’t go strict IBU overload and instead offers a pretty fulfilling with a sort of shallot and carmelized onion meets mango puree.  The waft is thin and has a touch of lemon hand soap to it that is forgivable because it ultimately comes across as refreshing rather than substantial in scope.

The taste is better than the nose and offers up a safe interplay between coniferous cones, yard trimmings, and grapefruit pith.  It has a clean fast finish that anomalously would work well in hot weather, and not as a late-Fall release but, I guess that’s fine? It doesn’t have any of the usual malty sweetness problems attendant to, let’s call it, PA’s bordering states. There is a lightly danky oiliness to the swallow that peaces out faster than when the professor says “attendance will not affect your grade.”

So overall, this is welcome offering in a bar that probably is serving like SHIFT or some other shit, but I don’t see you reaching for this over your [insert smaller local superstar brewery.] It will raise the nationwide Grocery Store caliber of beers and act as a cool counterpoint to the likes of Lagunitas and Green Flash in that segment, but people who are drinking Societe or Columbus or Trillium will not be bothered by the spread of this ambitious upstart.

Buy a six pack, crush it, start accusing your children of things that they couldn’t possibly have been responsible for. 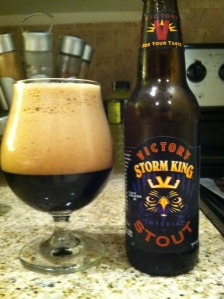 King is Loose Term for Storms

A: This has a slightly watery deep blackness to it, like the thin ink of a Pentel pen. The carbonation is outrageous. I mean that in the classic sense, inclining one towards outrage. It creates a huge 5” head that just maintains like mocha whipped cream. The lacing looks like a perverse Rorschart painting. It is a very attractive stout, for those so inclined.

S: The nose is a bit thin and doesn’t present much beyond a sweetness and a candied malt. I get a bit of a burnt vanilla and….that’s about it. T: There’s a bit of chocolate at the outset that gets very herbal very quickly. This feels far more like the Black DIPAs coming into vogue than the traditional stouts that I have come to grow and love. The taste finishes with a deep piney bitterness that is more like Hopsicle but with chocolate malts. I don’t know how this was classified as an imperial stout, but, variety is the spice of life, so says my Home Ec…er…”Teen Living” teacher.

M: Again, this doesn’t coat like a stout, nor does it present a big frothiness. It has a thin mouthfeel with a big hop body to it, if I didn’t know better, I would say that this tastes like a messed up DIPA that has a ton of high alpha acid hops. But, I guess I would welcome innovation over and above the same damn dancer/boxer/football team movie year in and year out. At least I have something to tell my children with this one, a good old epic tale about the old Imperial Stout/IPA that I enjoyed on a weeknight. Ah, memories.

D: This isn’t exceptionally drinkable. It is too bitter and doesn’t present all those Preggo delights that I enjoy: where’s my chocolate and deep smoky malts. To be clear, only negligent expecting mothers should drink this, if at all. Wait, ok, to be clear, this is a confusing malty hoppy bomb that belongs in that confusing penumbra category of Black IPA madness. Notwithstanding, it is welcome in my mouth. It’s hard to end on that but, oh well.

Narrative: “I need to get my Wiz Khalifa on, aint tryna be coding .DLLs all up in this shit,” Walter Lee protested voraciously from his cubicle. “They always posting on me tryna front on some spaghetti code ass bullshit, acting like I haven’t seen a debugged kernel up in this bitch.” His supervisor shook his head at the recalcitrant associate and tapped his red pen lightly against his clip board. This wasn’t the first computer coding job that Walter had been fired from. Admittedly, it was Neoscript’s own fault for hiring on a latent racist basis assuming that Walter Lee would be a successful coder. “I see dems, they post all up on this cubicle like they OWN ME. I post up on my set, peep this OH WHO JUST SET UP A BEOWOLF CLUSTER? Oh shit, that’s right, Walter. Ha haaaay!” the resonant call not unlike Jadakiss’s patent sound clipped against the aluminum ceilings. This was a clear case of a mismatch. This was someone who was ill-equipped to fight in the market in which he was competing, despite his inherent merit. “watch, watch, someone gonna write about this situation and be STRAIGHT RACIST!” Walter uttered from his Ukranian lips.