Alright stay with me here, I know this is a little crazy, oyster stout brewed with snail shells? I guess I should preface this entire review by saying 1) I don’t like oyster stouts in general and 2) I don’t eat snails, unless I am in a third world country and I am doing it for the lulz to show them I am just like thems. That being said, I will skull any beer and have zero regrets, well ok maybe SOME REGRETS.

But let’s bust these shells wide open and suck out the juices in today’s review. 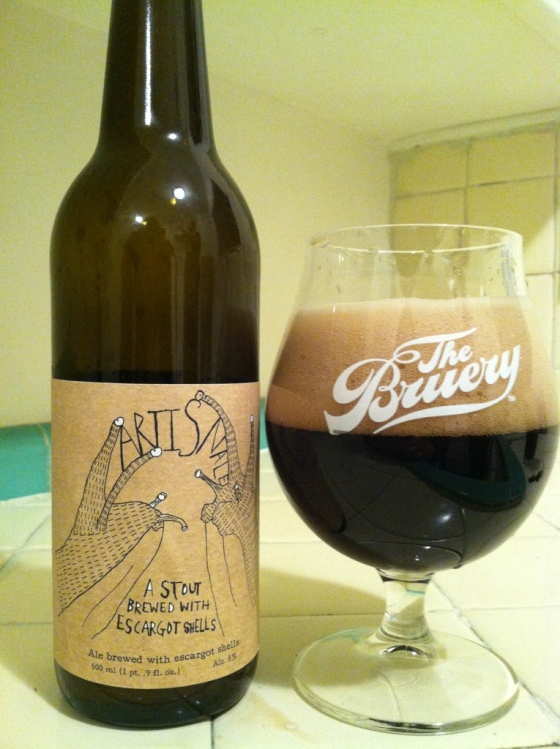 snails poppin slugs at those haterzzz

A: The carbonation on this beer is legendary and even the slightest agitation takes it to pre-menstrual levels of anger. I know it looks like I poured this like an asshole, but srs, I was pediatrician gentle with it and it still was all rustled. The slick “light black” inkiness of the beer seems almost deep brown in a way, compared to most imperial stouts that are darker than Satan’s magic. The head is absurd and straight out of a Juicy J video, all dark and excessive.

if you drink this stout, chances are you aren’t a complete piece of shit. Pic related.

S: This has a really sweet tootsie roll sort of waft to the smell, light roast, baker’s chocolate, and a sort of milk chocolate aspect to it on the nose. The hops are really restrained an almost seem to be well integrated with the char of the malts. I will say at the very back end there is this sort of longshoreman brine meets salts sea captain sort of thing going on that almost reminds me of a jar of nickels. It is not all up in the spotlight but the imperial oyster aspects are in the background, spinning salty jams for everyone to rage to.

T: The foregoing is continued and sustained with a sweetness at the outset that is at first almost offputting like some “imperial” stouts from England where you just lul at them for trying, being all turbinado and sticky. But then out of nowhere off the high ropes fucking brine and this metallic aspect comes in and drops ‘bows and puts the roast in a figure four. You think the ref is gonna call it, but oh shit, the snail shell aspect just smashed him with a folding chair. Things get out of hand really quick, but strangely, I had a hard time putting it down because I was fascinated by it.

if you are drinking imperial oyster stouts, chances are you aren’t a complete beta bitch in the permafriend zone. pic related.

M: This has one of the craziest mouthfeels from a stout that I have experienced in a long time. I am assuming that the inclusion of the escargot shells imparted a huge calcium and alkaline boost to the water profile because the water is super hard in this mix. After you swallow, the sugars dont even linger on your teeth and you get this sort of lip smacking aspect that is strange from a stout. This too reminds me of those UK stouts with a really gentle mouthfeel and dainty carbonation, this paired with the crazy sweet meets salty aspects leave me perplexed and straight draining the bottle.

D: This is exceptionally drinkable with the caveat that you must be able to tolerate some sweetness, hard water, and a light brackishness to your stouts. This might be a deal breaker for most people, but I was intrigued by it and finished this with celerity. For not liking the style itself, I would wager that this is about as awesome as this genre can get while still being on style. It’s like having the world’s fastest hybrid in a way, certain concessions will be inherently present within the confined of the category.

for an 8% beer, you hit this beer and this beer hits back.

Narrative: Penelope Brigston slid lazily across the wet concrete and soaked in the misty Seattle morning. The dew from last night gave a nice moisture profile to Vicksburg street and her stomachfoot embraced the pavement with calculating execution. She slowly passed the smashed earthworms, those annelida too ambitious to restrain themselves from walking right into traffic. Penelope felt a small disconnect with the suburban street and thought about all of her taxonomic brethren, such diversity in her family and yet she was alienated from all of them. Hell, she hardly ever wrote to her sea mollusk family anymore and the better part of her days were consumed in either eating fescue or licking Tootsie Roll wrappers. Busy days all around. Her radula worked assiduously tearing apart a discarded piece of romaine lettuce and she savored the metallic taste of the sardines and salt in the dressing. It was a hazy morning but Penelope would face life with both antennae forward, living life out of her shell as much as possible.

One thought on “@tiredhandsbeer Artisnale Oyster Stout brewed with Escargot shells, THIS IS MAKING MY SNAIL COME OUT OF ITS SHELL”