Back when the world was at peace, before the Nanomachines, before Skynet went global and the purity crystal was shattered into 8 fragments each guarded by an Eidolon guardian, there was something called the top 100.

In this top 100, were a series of sacred and profane images scrawled for admiration and cool reverence by the awkward prototypical beer nerd masses. Back when RB/BT/BA/TBS/RBT were orange groves sown by the tillage of honest serfs, there were walez. One of the most elusive in those provincial days was Kaggen and its wayward brethren, KONJAKS. To say that these beers are rare or sought out would be like saying that Sasha Grey has inspired a few erections on middle school sick days. Notwithstanding, if you feel like being nostalgic, go read my review of REGULAR ASS STORMAKTSPORTER HERE

Alright, enough pageantry, let’s get down to fucking business and find out which whale gots the most blubberers. 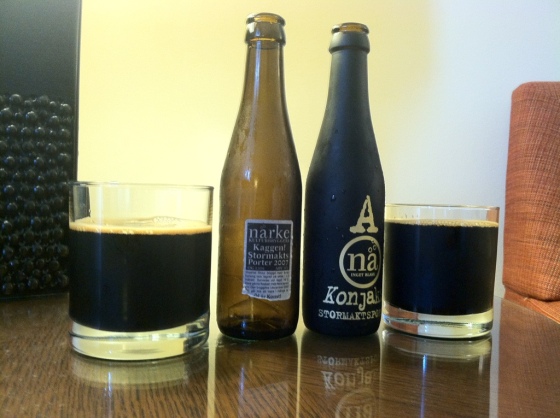 Kaggen: This pours a splish splashy cola brown that is black at the center. It is not an inky affair but carries that dark profile with a frothy khaki head that is impressive for 6 years of small format repression. The cling is nothing too intense and the lacing is gentle with a tiny clear sheet like when you strike a child with a book and watch the tears cascade gently.

Konjaxxxx: This looks almost identical, for obvious reasons but put forth a little bit more liveliness to the lacing and carbonation. If Kaggen is the reluctant friend, this is the drunk girl who at the moment is excited to go back to your studio apartment. These interactions are fleeting, savor them.

Winrar: Tie, they seriously look fucking identical. What the fuck is wrong with you?

At a certain point, when you slay two WW ticks at the same damn time, the butthurt becomes infinite to other sad pandas

Kaggen: This might be one of the best olfactory stouts that I have come across in my entire life. There is a light coffee aspect with molasses, toasted almonds, honey, brown sugar, an oaky resonance that fades into a nice roast. This reminds me of a sweeter Parabola b1 with a higher emphasis on honey legs with zero abv. I hate loading on adjectives like a fucking asshole but they are seriously there. I guess I can just staple my nutsack to the sides of my thighs like a sugar glider if you don’t believe me.

Konjakson jackson: This is a whole different bag, in an insane NeoGeo 16bit port to console sort of way. This is unquestionably more ambitious and sets forth everything that Kaggen does but THEN FUCKING PILES ON MORE. You ever go to a frozen yogurt place and just go way overboard on toppings and find yourself plowing through all this conflicting shit like Peanut Butter cups with raspberries, brownie bites with Lychee, its a complete clusterfuck. You get smoke first and foremost, like a Duraflame log dipped in brownie batter then lit on fire with Cognac. The wood is present and the sweetness comes around like a scorched Nestle Tollhouse cookie. Sweet and smoke and indian burns on your dick all at once. It is just too much.

WINRAR Smell: Kaggen, times a billion, since forever until always.

When I popped both bottles, shit got real, things became tumescent.

Kaggen: God damn it, those efficient ass Swedes just made a compact deadly weapon of stout destruction. It is clean and pure in execution, extending the cola, almond, bakers chocolate, truffle, tootsie roll but imparting a subtle barrel character and absolutely zero abv. The sweetness makes this drink like Edmund Fitzgerald, and it only gets better at higher temps. Worth the hype completely and frustratingly so.

Konjacksing off: This is actually a really phenomenal beer to drink, despite the fucking menagerie on the nose. This reminds me of Bar Fly went and fucked Czar Jack and their little spawn baby was left in the nordic plain to develop. It is lightly smokey but lacking that red wine character from Bar Fly. The sweetness is unquestionably European in execution and sets forth this soft sticky caramel and mallowfoam all set against this toasty campfire backdrop. If you feel like having a great campout beer while being molested by your youth pastor, this would be it. Whales and psyche treatment bills, hand in hand.

Winner: This one is actually really tough because Konjacking off felt so good, but a little wrong. I still have to give it to the OG Kaggen, it’s like Rosie O’ Donnell at a bisexual bridal shower. It deeeeeeeeeeeed it. 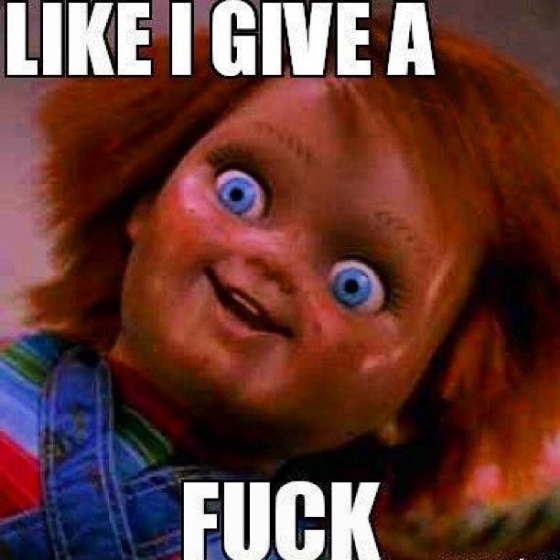 Kaggen: This is the Yoshi of the Mariokart stout world in that it is innoculous, gentle, precise, hits the marks you want, doesn’t go overboard and keeps things ratchet enough to be trill throughout. The sweetness lingers but not like something from Southern Tier/DerkLerd. The roast is gentle but doesnt dry you the fuck out like Darkness. The barrel is restrained and doesn’t pound your face like BBpt5. It is tough to write notes on a beer that is so elegant and reined in execution. The 8oz bottle is such a kick in the dick because I only want more. Of this beer, not kicks to the dick.

Kernjerks: This is actually more interesting on this front than Kaggen because it is so damn sticky and sweet. The smokiness leaves a little bit of drying but the real show it the sweet toffee brittle and oak that lingers for days on your gumline, just making you wish you had dental insurance you poor fuck. The finish of caramel with tobacco sounds gross but it is delicious as fuck if only because I can’t think of anything similar to this.

WINZIPRAR: Konjaks! For reals, the mouthfeel was slick and sticky, smokey and sweet; fucking awesome.

Kaggen: This is easily one of the three best stouts that I have ever had in my life. I cannot honestly think of valid areas of improvement because it just Limit Breaks the fuck out of my mouth, omnislashing all the flavor zones. The balance and robust flavor is irreproachable and well worth the hunt and tick, if your anus is down for that 5:1 sort of shit it will no doubt take. Godspeed you ugly tickers.

Konjaks!: Despite all my nitpicking above, this is still a fantastic beer. This should be viewed on its own and not held to the glaring standards set forth by Kaggen! It is better than Barfly and I have a serious aversion to smoke. It is as complex and fascinating as the cycle of poverty, and equally dark. I would have a tough time recommending going apeshit to lock down this one-off/rare/retired variant, but if you have already beat all the level masters and are going for completionist shit like DDB is all about: IT IS A MUST TICK.

1239 words about two rare ass Swedish beers? BRB cleaning all the cream out of my jeans.

Alright, everyone knows that the 2000 vintage is the testicle drainer that everyone loses their shit over. But what about the equally alluring NEW vintage? There were all kinds of rumors about how many bottles actually made it stateside, I heard anywhere from 380 to 1100. Shelton be flipping bricks of that raw uncut so it wouldn’t surprise me on either front. This aint even stepped on, 25 months in a barrel making North Carolina breweries shake their heads in disdain.

A: People complained like little Delta Gammas when they pour this out about the lack of carb but to be fair, it was in a barrel for 2+ years and it is 12% abv, I wasnt expecting some crazy bubbly gusher out of this decadent bitch. This is penny amber and deep copper notes at the center with a nice radiance to it. No lacing, no sticky bubbles, just a lil prejizz wisps on the collar. This isn’t your first time.

S: If you walked into this shit expecting a belgian strong, guess again motherfucker. This is deep cherry, oak, vines, merlot, red grape, tannins, fruit by the foot, and some sherry wafts on the backend giving some sweet dryness. Your aunt has been sipping on that cherry cordial liqueur and wants an open mouth kiss, for old times sake. Those 2 years in the barrel made this asshole a heartless sour wrapped in vines and you know deep down that barleywine-esque maltiness is there, but too much time in the hole made this Virgil a product of Bordeaux hell.

T: This follows the nose pretty congruently and lends some tannins to the malty base but at higher temps you get a sort of english barleywine aspect to it with some toffee and caramel in the finish. However, the cherry ring pop and red wine continues to run the yard, shanking malty inmates with pieces of sharpened oak. Dont fuck around with this beer, hold its outturned pocket and know your role. 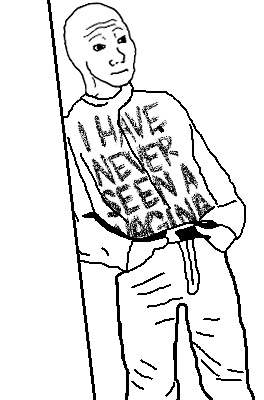 That feel when you pop crazy bottles and have nothing to talk about in the elevator on Mondays.

M: This is initially sweet and sticky from the cherry and malty base beer but then the tannins and oak cause a mouthriot and people start throwing dry mattresses over the railing drying shit out pretty quickly. Riot control washes it away clean but you know that dryness is coming back after the cherry aspects leave. The ABV is pretty well integrated but it is there polishing a fat Cabernet nightstick ready to pound the fuck out of any bitter zones that get out of line.

D: This is drinkable but a whole bottle for lunch on a Tuesday was a bit cloying after it warms a bit. Hey here is a crazy idea, maybe you should fucking share this bottle instead of being a greedy fuck? Yeah, I know. I would get down on this again but maybe spread the love around a bit next time. I liked it but didn’t fall in love with it and the complexity took a backseat to cherries and port near the end. No regrets/10, would bang again raw dog double lover no rubber on that reservoir tip. 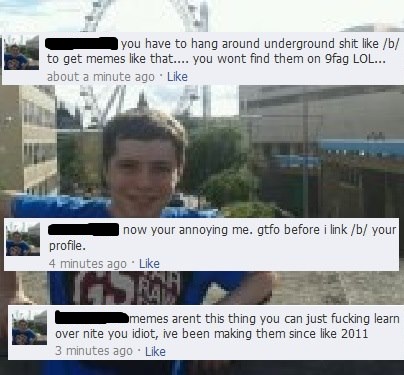 Narrative: “Well hey hey hey fellas!” Chip Merken piped out loudly while deftly handling his pitchfork. “Ah can it Chip, we can’t take it on harvest day.” Harvest day was hard and long, with an oppressive sun. Chip was always a crisp jolly individual who could somehow out-harvest the others, and outsow his colleagues at planting time. He popped a cherry into his mouth and thought up another upbeat tune and began to rap on a piece of oak. “Toot doot dee do da dee dee daaa” he whistled some antiquated tune to himself, smiling in between breaths. “COME ON, DAMNIT CHIP!” One co-worker threw his rake down in anger. “Here we are trying to harvest some damn wheat and instead we have you all up in our heads with your old show tunes and knock knock jokes, don’t none of that make this any sooner!” Chip’s smile slowly faded and he looked down at his glistening pitchfork, “don’t let them get sore at you old Chip, don’t let what happened before ever happen again,” the darkness in his heart burned. “Well sure fellas! I will go get the reaper, I GUESS!” The reaper indeed young Chip, the reaper indeed.