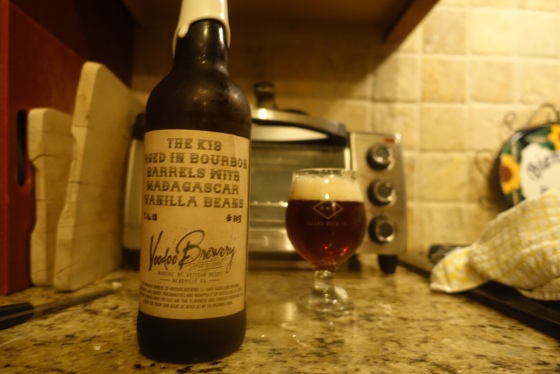 It is no secret that I appreciate voodoo brewing from soup to nuts. Their initial struggles, to redefining what PA is capable of in the strong ale game, to rocking employee owned structure and pulling a hoodwink to exploit a GS loophole in stupid ass PA liquor license laws, arguably the fucking dumbest in the nation. When k13 first came out in 2013, BABW were seen as this second class cuisine, unrefined albeit delicious street food compared to nilla steaks and delicate lambic Nyotaimori. But the OG k13 had PAPPY on its side, which is like catnip for dudes with no bourbon knowledge and popcorn ceilings. The OG k13 came in 19 out of 30 in the infamous blind BABW challenge in 2014. Two people on the panel nerfed its score I feel unfairly and I always loved that beer. Here we are five full years later and it is finally back, but like a father who never returned from getting smokes, sans Pappy. This is the same 18 month treatment but in regular ass four roses barrels, and vanilla added. Contextually I take issue with vanilla in barleywines from a theoretical perspective. It is usually unnecessary and we don’t want to degrade Life to the CAKE BOSS levels that court blunt palate assholes who love stouts. Thankfully the vanilla here is almost a lipid and light olfactory component that is pretty absent from the taste. The color is lighter, the body is less substantial, the whole thing feels more efficient to a fault. Thankfully the nose is so god damn good, skor bar, caramello, port sherry, peanut brittle and a dry canvas and grenache swallow. The american BW base is transmuted into something entirely different and it is entirely easy to take down this bottle with ease. The faded hops dovetail into the wood profile and provide a counterbalance to the light sweetness. It’s not as enjoyable as the OG k13, but it’s also far more manageable and recumbent. As long as your bean is not bisected, you can enjoy this as a tightly sewn exceptional example of life.