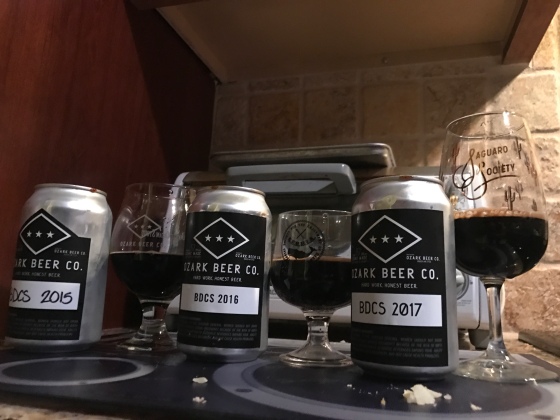 Every year @ozarkbeer releases this amazing gem and, despite it being the absolutely best local trade bait that Arkansas has to offer, the people who swap these beers are always crushingly generous. It is almost like There Will Be Blood where these remote locals haven’t been tainted or corrupted by outside colonialism or an injection of artificial capital and they exist in that “StL pre-Side Project” phase of development. There are still places in America where people aren’t rapacious fucks trying to grist out every possible razzle slot. Ozark sells to these legitimately cool and nice people. Bourbon Double Cream Stout transcends the “local favorite” to something that warrants legitimate contemplation on a macropalate level. With its minimalist packaging and unfortunately consumer stymying acronym, sometimes this gets lost in the fray. The thing this beer does exceptionally well is the flawless balance between silky oat mouthfeel and enough barrel to contribute a spirit profile to prevent it feeling flabby or insubstantial [cf. Velvet Merkin would be a top offender of the latter.] It is not exceedingly booze driven and seems to come from an era rooted in the late 2000s when harmony between structure and cask profile was sought and a sky high final Plato wasn’t some lofty goal to be celebrated. A dripping crown of Floridian inefficiencies. The taste reminds me in scope and consistency of Nestle Quik with a twinge of nougat and brownie bites in the swallow. 2016 was my favorite vintage but it bears noting how this beer ages exceptionally well and trades so low by contrast that it presents a welcome exotic alternative to many stupid hypewhales in the game at present. The entire affair feels like a day of shoulder isolation lifts: stability, fortifying, providing context and grounding to prevent palate injury on more extensive range of motion. “Simple” is often a pejorative in the current landscape of laughable excess and creativity bankrupt marketing departments who see a rolling boil as some Urkel-to-Stefan machine for their mediocre beers. This is very much the opposite of that: the anathema of hype that delivers on solid classic decadence.