Ah these silent Arizona bubblers. From Superstition to Arizona Wildnerness, now Wren House seeks to arm the populace with wares from that state dripping with 2nd Amendment exceptionalism.  This is the bourbon barrel aged version of Olmec from Wren House which I previously reviewed back in the condo days.  Back then, my chief complaint was that is needed refinement from barrel aging and well here we are, BALs deep in treatment. 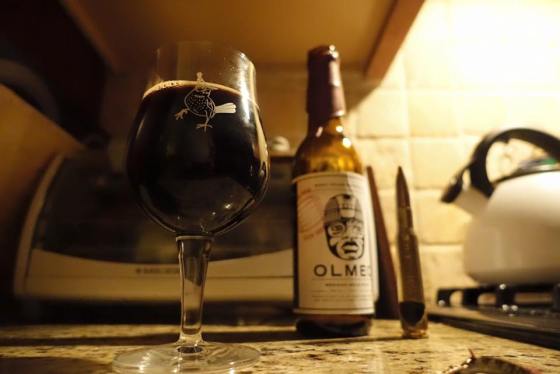 So since you already have a pretty good idea of what this Huna clone is up to, let’s discuss what has changed in the interim.  Thankfully, the body of this beer sustained over the long casking and didn’t pull a Michael Fassbender in HUNGER coming out lookin like Christian Bale prepping for the Machinist.

The coating is there, the residual cling has a heft to it akin to the likes of that Parabolic sweet spot.  The carb was muted but understated in a Kuhnhenn way, but didn’t lie flat like some Alan Sprints joint.  Mild liveliness, like a caffeinated student from one of the Seven Sisters colleges, with less bitterness. The nose is all barrel, nougat, caramello, macaroon, whipped brownie batter and a hint of roasty earthiness like toasted pumpernickel.  You’ll immediately notice the inherent flaw to this Faustian trade-off: the adjuncts are fucking gone.

If you have a blunt baby palate, that probably will be a deal breaker for you.  Who doesn’t like tasting an overstated adjunct bomb and then confirming those impressions by reading from the label of added ingredients? Well no such luck here because the chili and vanilla have been seamlessly integrated like latent racism in a Teaparty speech so you can barely separate the two.  To be clear, the trade off is certainly worth it, I will take a nuanced barrel profile and an exceptional BA stout over some Hispanic foray into barrio stout culture.

The real takeaway is that this parlor trick demonstrates that Arizona has a new barrel program to hang their Von Dutch trucker caps upon, that orange skin glowing cardinal in excitement.  Now all they need is a janky proxy system and a bunch of spineless CA tier vassals to ship them out and they will be all set.