After months of work and hundreds of dollars tracking down these 19 bottles, opening them blind, and crunching all the numbers: I am now fully prepared to listen to the blubbering of landlocked dipshits complaining about how Bourbon Vanilla Dark Lord was not included.

In opening so many world class beers blind, it almost is a sleight to think of any of these beers as “losing” such a competition.  Alas, in blind rankings someone has to bring up the rear, and there were quite a few surprises along the way.

This is the order in which the bottles were opened, from L to R: 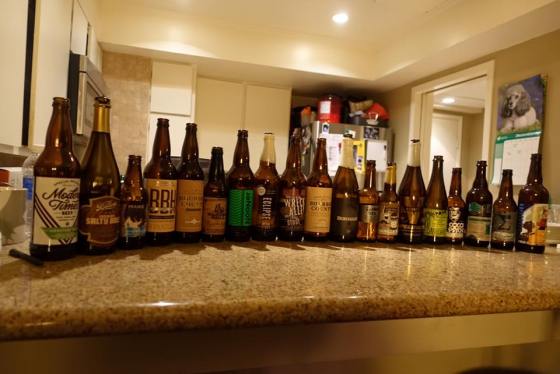 The winners and “losers” were as follows: 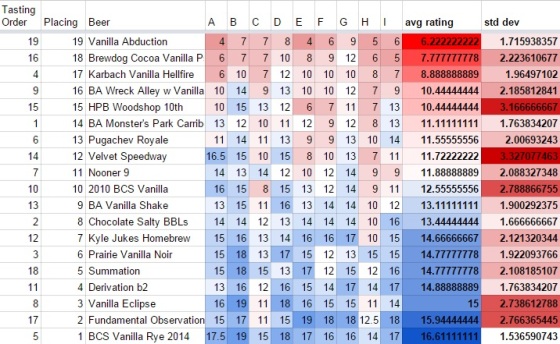 Pictured in order as ranked above: 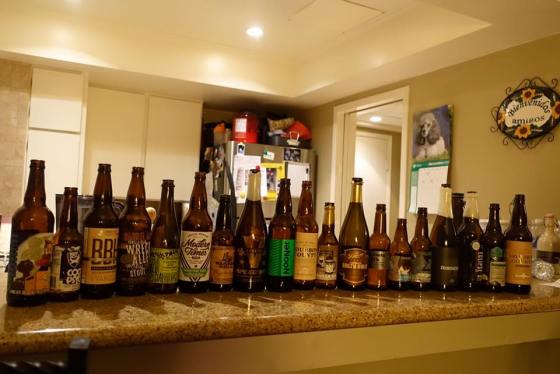 This time inverted, first place on the far right, down to the humble Pipeworks Vanilla abduction on the far left.

Some takeaways from this noble experiment: 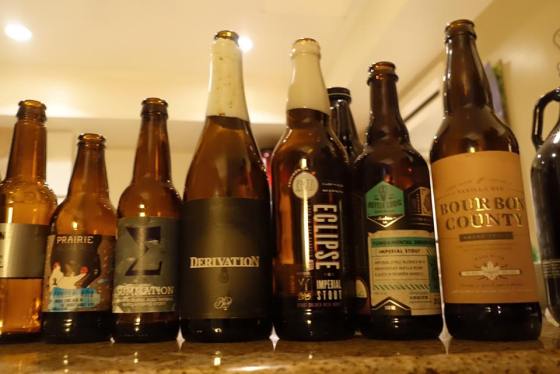 4.  The paradigm of cost to quality, within the scope of hype seemed to skew everywhere.  Certainly the cost of entry controls perceived value, but Derivation 2 was damn near the best regardless of hype. Of note are the two “homebrew” titans from Kyle Jukes and 3 Sons clocking in at the top of the pack, demonstrating that small batch beers on nonstandard setups can return awesome results.

5. The heralded battle between Fundamental Observation and Vanilla Rye almost ended up in a dead even stand-off.  Perhaps two different palates could have inverted these two results, the preferences were so contentious that they might be viewed in directly equal parity. Notwithstanding, it is important to note that “shelfturds” like the new Eclipse Vanilla and the wildly impressive Prairie Noir still held their own amiably in a ridiculously tough lineup. 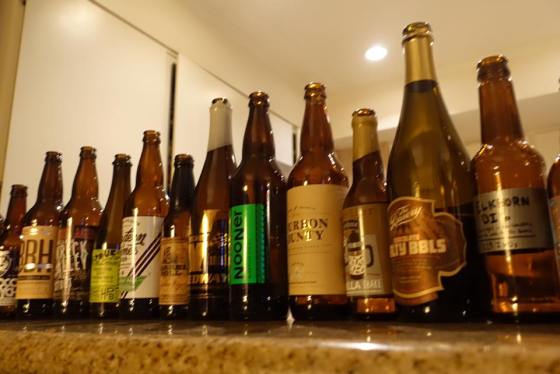 6.  The Bruery, with almost zero fanfare received high praise and return pours once the beers were unveiled.  The perceived loss of stock in a company turning out consistently awesome beers is great in the climate of whale hunters who have moved on, seeking more cetacean waters.

7.  The biggest upsets of the evening were both SoCal darlings: Hangar 24 Pugachev Royale and Alesmith Velvet Speedway. After combing through the notes it appears that the death knell to these two beers was an odd lack of balance respective to each.  With Royale the common complaint was predicated on the “heat” of the bottle, which may have been remedied if served in larger pours at higher temps.  The relatively thin body of Velvet coupled with a subtle vanilla presence seemed to draw focus away from its nuanced style.  People were pretty shocked where both clocked in. 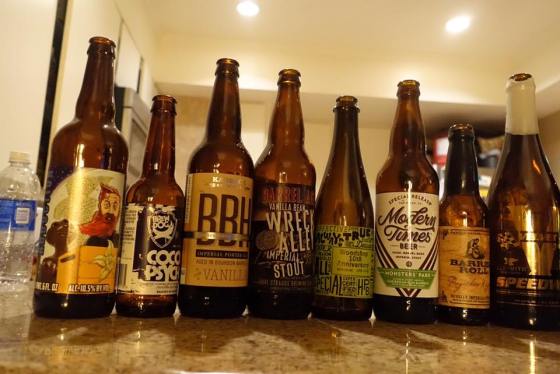 8.  Within the lower echelon were the nonstandard offerings which seemed deficient by contrast: either for a lack of barrel aging, a Natalie Portman thin body, cedar agign, or for merely being an Imperial Porter.  The numbers were unanimous in this regard and while the “bottom” tier in a world class tasting still contains notably awesome beers, they simply could not stand up to the Holly Holm onslaught of getting pounded in the bean all night.

Or maybe DDB is just a shill pussy offering prevaricating language to preserve relationships with the bottom ranked breweries.  Maybe DDB needs to pander and offer conciliatory prose to offer a gentle patpat on the scapula of the fallen.  Or maybe DDB doesnt trust its readers enough to infer that the worst in a tasting is no demarcation of an objective lack of quality.  Maybe DDB doesnt even know that Cocoa Psycho wasn’t even barrel aged and doesn’t even contain coffee or psycho. WHO KNOWS

At any rate, congratulations again to Chicago for literally and metaphorically representing both the best and the absolute worst in the beer world. Hats off to all of the breweries involved, fantastic job all around.

BRB setting up a gmail folder for all of the “SHITTY TASTING WHERE WAS MY [stupid obscure local draft-only import stout aged on vanilla beans]” emails.

[fn1 it is common knowledge that the adjuncts in midwest stouts never falloff, coffee and vanilla exist in perpetuity and will always drink JUST AS GOOD AS EVER, particularly in the esteem of parties attempting to trade away 5 year old bottles.]

2 thoughts on “Blind BA Vanilla Tasting Results Are In: Chicago Does it Again Back to Back”