Alright, another top 100 ranked beer, well top 15 to be exact, and arguably the best Double IPA in existence (grumblegrumbleCitragrumbleEphraim)

Let’s get this show on the road. 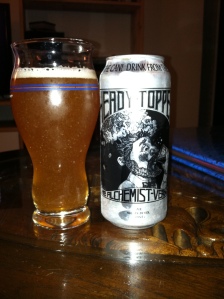 A: This beer has a hazy orange glow to it with great carbonation and a radiance that looks like when you cut a unicorn open. It has a huge sticky head to it that subsides gradually.

This beer recognizes how sick of a bro I am and doesn't bother me. It's like we friends.

S: This has a single smell with limited complexity, overwhelming grapefruit and acidity. This is probably the closest that a Double IPA has come to smelling like a gueuze. Very fruity and acerbic on the nose.

T: This is a one trick pony, but it is a pretty bad ass trick: it plants, harvests, and juices an entire acre of grapefruit trees in your mouth, in a single drink. This isn’t an herbal or hop overload, it is just orange juice and grape fruit puree. It tastes like fruit juice more than Citra does. This beer is better cold for this very reason. This is a world class beer and it is incredibly distinctive. The juiciness doesn’t impart any bitterness that lingers.

This beer is just incredibly refreshing, like watching a baby hippo get all upset. Ahhhh.

M: The mouthfeel isn’t too overwhelming, but just malty enough to carry the huge flavor of this beer. It washes away with a crisp finish. This is a serious contender against Citra and Ephraim.

D: This has an incredible drink ability that is perfect from the can. I wonder how the hops hold up over time but this beer has a lot to offer and can likely stand the test of time. Once again, all of the beers that you want to pour into a spoon and boil in an addictive spree, are not available in California. All of the incredibly drinkable beers remain just out of reach.

I guess I could search for another, better, double IPA, but, I fold.

Narrative: It wasn’t an easy life for Paradisi Juicio, living in Barbados and all. For years and years, he was overlooked, mistaken for his cousin Pampelo Tangelini, and over shadowed by the ever-popular Shaddock boys, with their rough handsome demeanors. “WELL MAYBE IF YOU JUST LISTENED TO ME I WOULDN’T HAVE TO YELL AT YOU ALL THE TIME!!!” Paradisi boomed, wiping sticky acerbic sweat from his brow. “THAT’S NOT WHAT I SAID. TELL ME WHAT I SAID!” he boomed, his face turning into a bitter grimace. It felt as though, his friends had been picked off one by one recently, ground into the earth, so to speak. People just didn’t care for his kind like they used to. The ruby red complexion of his wife, Grappa Juicio, became sullen, “I just don’t think that we can go on like this, what with the low carb diets and, people replacing us left and right, I just don’t know where we fit into this crazy mixed up world.” As she finished her sentence, the double doors swung open and the oppressive land lord came striding in. “Mr. Galaxy, I didn’t know you were-” “Oh sure, didn’t figure I would come this soon, oust your and your outdated fruit kind? Listen up you degenerate citrites, the hops run this town now, ain’t no body interested in some bitter old juice anymore. Not when me and my hop boys got something to say about it!” Grappa weeped acidic bitter tears and dreamed for the days when someone would enjoy her for her sweet disposition and not some false citrus experience.