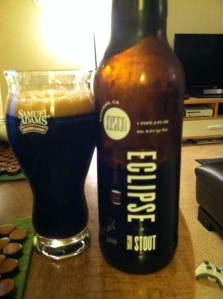 A Total Eclipse of the Stout

Astronomy getting all twisted like a bag of ropes.

A: Not the hardest convict on the block, nice oiliness but not unapproachable. It has a good carbonation that flees cell block 50/50 immediately. There is a nice lacing that sticks around looking all like Mervyn’s cargo shorts.

S: Holy hell, the bourbon has still not settled down at all. This smells like whiskey, oak and raisins all the way down. This doesn’t come across like those tame ass raisins in barley wines either. I mean angry California Raisins after years of being portrayed as a racist demagogues. That sort of pissed.

T: The bourbon shows up immediately and opens the door for a series of cronies, each one more hateful than the last. Filing in succession we get coffee, wearing an eye patch, raisin, brandishing a switchblade, and the mute, fig, silent but deadly with the sais. What a band of rogues this barrel assembled for my palate.

M: It is not overly filling but it is still intimidating given the panoply of items being presented. I don’t feel like I need to sign over the title deed to my tongue, but it certainly is implied. The coating is nice and similar to a breakfast stout until bourbon comes rolling in and busting up the place. If my tongue owned a PS3, he would be smashing it. Now where am I gonna find another copy of bourbon barrel Katamari Damasi on such short notice?

D: Well given the fact that my mouth feels like an oil refinery, I would say “not very.” This feels like a barrel crude oil and not in that cool Abyss ‘09 way. This just feels dangerous like I shouldn’t smoke around it. I don’t care about the different versions, there is something inherently insane about this beer. Some might opine “oh this cousin cuts himself LESS” but that doesn’t matter, it is still patently insane. Usually I would complain about the abv but here it is just the execution. It is like someone with ADD was in charge of the secondaries and my palate is a proximate victim. Coffee splash damage +24.

Narrative: The life of an oil refinerist was not glamorous, hell, it wasn’t even recognized by Google as a legitimate profession. That didn’t stop Slick Crudework. His parents almost named him knowing his future prospects, but that is a story for another time. He had been the overseer at the Mobil platform #42 in Long Beach for as long as he could remember but he didn’t mind it at all. Slick would come into the local AMPM covered in sludge and the recalcitrant Korean man would yell at him but, hey, if not for Slick, would those pumps be pushing out overpriced unleaded for Mini Cooper owners to feel good about themselves? Probably not. “A 211, some henny, and some Listerine strips.” The truth was that Slick did not even want these items, he had heard E40 order these items in a song and wanted to seem relevant. The Korean shop keep presented them to him balefully. He followed his own mucky steps out to his car. Sure everyone thought he was a drunk and overpowering, but who really was the crude boss in this bossocracy? That’s what I thought.