So today we have a RARE GEM from the Brewer’s Cut series from Sudwerk, these scamps in Davis.  So this is a STRAWBERRY berliner, but then when I went to their website, it notes “Davis microbrewers of hand-crafted lager beer adhering to the Reinheitsgebot German Purity Law” so I WUTTTTed pretty hard.  When I initially asked people about this, they said it was a myeh brewpub, but then other people staunchly defended the brewery itself and said that the barrel aged/brewery only offerings are amazing compared to the quotidian offerings sold at the yawn-worthy pub.  CHALLENGE ACCEPTED.  So let’s see what these Davis boys be putting they tips into in today’s review: 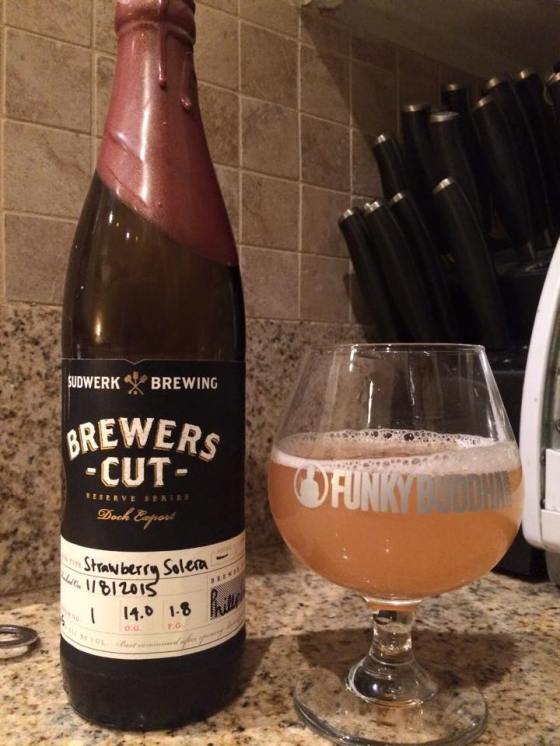 The brewer presses his hips against yours and whispers this into your ear, lovingly tugging on your Beats by Dre ear buds:
““Strawberry Solera is a blend of Solera Weiss fermented with Sudwerk microflora and a Brett-Saison aged on 1lb/gal Sacramento Valley strawberries in Bordeaux barrels.  The nose is lactic, lemon, and berries with moderate Brett character.  Clean palate with bright berry and tropical highlights with a dry finish.”

A:  This is a turbid lil messy Jesse and has a creamy look of some Vermont trubtastic offerings, but at least this makes sense given the unfiltered hefty wheat bill.  There’s an orange julius and whipped smoothie carb to it and it looks gentle albeit far too substantial for a BY THE NUMBERS berliner.  But Southampton brews shit like UBERLINER and gets away with it so, whatever, just think of this as a Wittbier with fruit, you don’t give a shit. 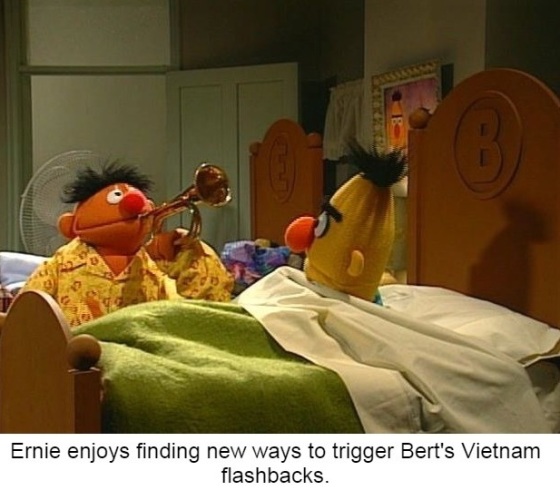 Whenever I see strawberry on the label, I flashback to horrid beers from the past. Trying to live life in the present like Foodbabe tells me to.

S:  At cold temperatures you get this lightly plastic aspect that can occur when using strawberry as an addition.  It isn’t like a sick/ropey/phenolic, none of that business, its more like when you unroll a fruit by the foot and there’s a faint synthetic aspect.  After it passes 55 degrees this burns off and it is imperceptible.  The fruit character is very pronounced and the berry exhibits that same tannic farmer’s market aspect attendant to Cask 200 Strawberry or Omniscience and Proselytism.  As long as you don’t drink this exceptionally cold, you are cash money records. 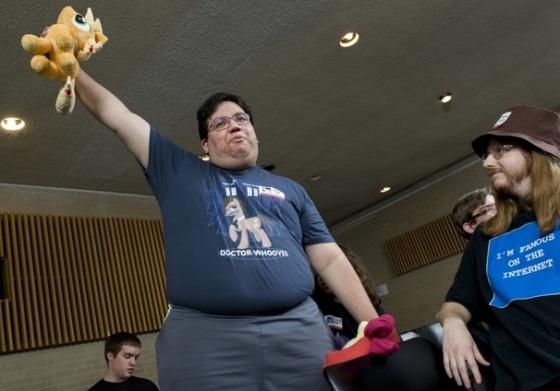 Your hombrew club is gonna flip out when you tell them how RAER this beer is. Also, it tastes good, but THAT SHIT IS IRRELEVANT TO YOUR HOMEBREW HOMIES.

T:  None of the synthetic aspects are present on the taste and this is actually very impressive.  It leads with a tangerine, lightly brackish cream of wheat breadiness, then the strawberry dominates IN THE FLAVOR PROFILE.  If you have had many strawberry beers you will know that most of the time, it exists on the nose and then peaces the fuck out on the taste.  All that insoluble fiber aint got time to be tasted and shit, gotta take its girl to the seed clinic.  This is less jammy and more like a saison with a pump of Torani strawberry, aged on musky red Jolly Ranchers.  That last sentence sounds like shit, but this is very legit.  Too legit to quit, even.

M: The creamy profile is very silky and soft with a far more substantial heft to it than most berliners.  It feels more like a straight up AWA scissoring a saison in a hybrid Apple car.  If you told me this were a berliner I would shake my head like when Cigar City hands me a 12% robust porter and starts quoting BJ standards.  As long as you dont need your BJs to be completely certified, you will enjoy this fruity creaminess to full completion. 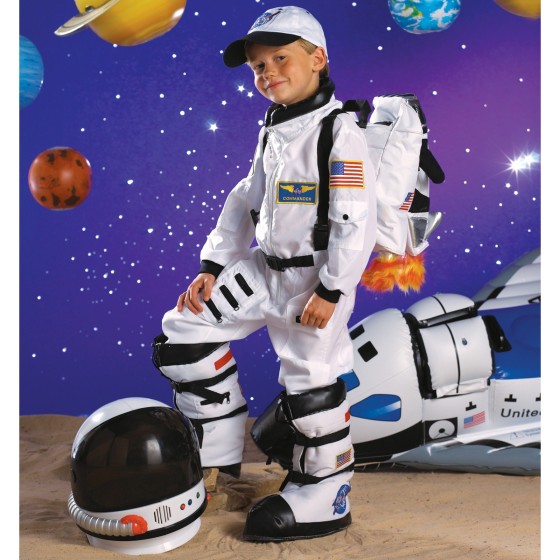 You can handle a barrel aged weissbier on strawberries. Dream big.

D:  This is exceptionally drinkable and again, feels like Cask 200 Strawberry and Cascade Strawberry had some extramarital affair and dropped this tannic trub baby on the steps of the berliner orphanage to be raised under a different name.  THAT SHIT SOUNDS LIKE A NATHANIEL HAWTHORNE NOVEL THAT COULD HAVE BEEN.  At any rate, I saw the brewpub ratings for this brewery and expected this to be a bowl of anus dipped berries, but it is actually really tasty.  Go to Healthy Spirits and ask to see the spot on the shelf where these used to sit, light a candle, make a day of it.

Man this beer was released today and people have been ripping their pubes out in frustration for all manner of reasons prior thereto.  It is either pretrades asking for Blauw, lowballers offering up shit like bomb multiples, people with feels about how the BPT release went, the narrow pickup window, or just general old-fashioned localized butthurt.  Grade A uninformed shit talkers will point hard at BA Token and Chez Monieux, while simultaneously seeking this beer out.  Self-aggrandizing dipshits will try to flip this for Ann before even trying it.
Beer releases bring out the best in people.

So is this better than Chez Monus? Let’s grip them fuzzy fruits and caress the berries in today’s review: 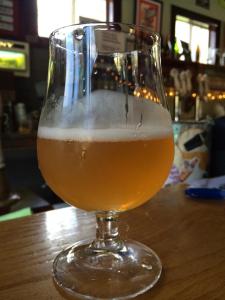 I had three pours of this on draft before it kicked, zero ragrets were felt. 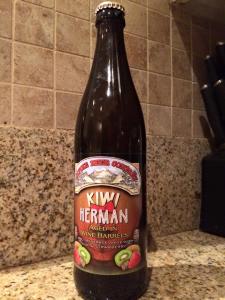 Please note, this review is relative to only the draft offering. The bottled version could be nothing but unrolled condoms. I would open my bottle but I am waiting to trade it for Pipeworks or Cigar City beers. I trust you understand. 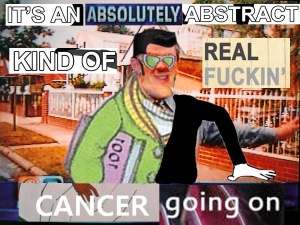 ITS JEST DDB TRYENA BOOST UP THE TRAED VALUES ONCE AGAN. SO MUCH CANCRE, I kno bcuz i have tried evrything and i have objectiev tastebuds

S:  The nose is fantastically bright providing a blast of Gushers candy, refined acidity, fruit by the foot, zero acetic aspects present in some other Alpine sours, and in an odd way reminds me of Zomer in that “sun in a glass” intensity that calls out to both summer fields and farmers’ markets.  Their is a light brackish note to it akin to some of the 4% light offerings from De Garde. 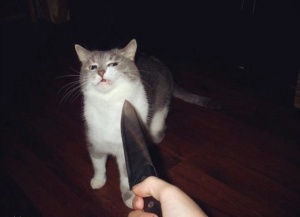 T:  Strawberries are traditionally a complete bitch to work with, just balls of acidity and insoluble fiber.  You either never get the strawberry taste, or it ends up being a New Glarus smuckers jam bomb.  This hits the perfect middle ground where it presents strawberry at the outset, you get the pithy berry and Special K dried fruit aspect, but then the kiwi comes in to deliver that acidity you were hoping for to round out the complexity.  The fruit works in parity with a one two punch that presents the best aspects of both admittedly unbalanced fruits.  Go drink Cascade Strawberry then chase it with Upland Kiwi and you will feel the clear inequality between how amazing this beer is by contrast.  Alternatively, if you take the already stellar Omniscience and Proselytism and add the complexity that some of the Jester King sours so desperately need.

M:  I braced myself for dry rot at the outset when the kiwi began to work its scorched earth campaign, however, the facerape never sets in.  It is unquestionably bone dry, with strawberry juice to fill in the closer to make you want to chain combo the next sip with air to ground combos.  You can drill the 500ml bottle by yourself without any problems, and you would be reticent to share it with anyone after tasting it. 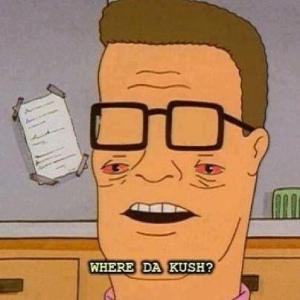 2k14 tickers drink a few fruited berliners and think they on that g13 shit.

D:  Piggy backing on the previous category, it is intensely complex but never turns into a cheesy gruyere forward beer that is cloying.  Concurrently, it never tips its hand in the realm of acidity and remains welcome from first pour to light warming.  I liked Chez Monus, but I feel that this is more complex, more nuanced, less full frontal acidity and allows the interplay of the fruits to work in ways that aren’t as predictable as the same stone fruit milieu we have seen a million times before.  It is simply a better beer across the board and it is well worthy of your iphoneSex, give it that facetime.