Let’s talk about these fellas at Other Half Brewing. The New York beer scene is interesting in itself and mirrors Los Angeles bber culture in many ways. It is ever a hub of incredible beer bars and a simmering cauldron of activity in the craft beer world. However, the action of simmering is an exothermic reaction to external forces, and the two metropolitan areas function as weathervanes from external change. SD bubbles LA’s britches. Sure New York has their share of Captain Lawrence’s, Ithacas, and Southamptons smattered around the landscape, but the driving pulse lies largely in the icy north.

So today we have an upstart that is carving their own legacy in reviews and trade ISOs: Other Half Brewing. Lets find out if these stand on their own or merely mirror facets of the frozen Vermont population living north of the wall.

I only pop you when it’s half, past five.

Mosaic ipa
This is seemingly the paradigm of reactionary given how many fucking breweries are leaning hard on Mosaic hops almost exclusively at this point. It is the CITRA hop of the 2011 era. This is a gentle beer across the spectrum that delivers exactly what it promises, a fistful of chive and shallot, resin and a floral finish. It is highly crushable and very well done.

The only reason j can fault this is due to the fact that there are x to the nth power of other breweries doing the exact same thing. It’s like being super impressed with a paper towel company. Just buy the ones that clean up child vomit and get on with your life.

Galaxy ipa
Essentially the same as the mosaic with a bit more creaminess to the mouthfeel. It comes across as drier and more refreshing albeit less drillable than the mosaic. This is an overall better beer but the hops are such a fantastic panacea that you would have to be a pretty shifty brewer to drop the ball on a galaxy brew. It’s no HF double Galaxy, but likely better than what is available at your local bottleshop.  If this is regularly on draft at Blind Tiger and the like, an incredible new crusher has joined those NYC ranks.

I mean, I do that, I make time for that.

Hop Showers
I have seen so many people seeking out these iconic cans and I feel that this is the best example of infectious marketing this side of those insufferable Rogue bottles. Sadly, the beer itself is nothing to go crazy over. It feels like some two row that was fermented too high and somehow still has a residual sweetness to the body that calls back to the Founders ipas from days past.  There is a notable sense of honeydew and almost menthol herbaciousness to the swallow.

You get that link I sent you of a woman havin sex wit a bee?

I guess it’s greatest sin is that it doesn’t really command your attention or demand contemplation . For some people that would be a massive merit to their IPAs, but not for this salty worn out leather donut of brackishness. The can art carries the day for what would otherwise be a forgettable entry. Not bad but nothing you need to open an incognito tab for.

The fact that this is sold in any kind of multiple can format is amazing and horrifying at the same time.

All green everything TIPA

Ah yes the triple ipa. A style no one but novice hopheads begs for, a style breweries continue to fuck up time and time again by scaling up ineffective DIPA recipes, an often flabby mess replete with crystal malt or honey or some other stupid shit. This is the style that elevates the beta casual hop lover Into the trading and reviewing ranks. Thank god for this style, for its unending comedic effects.  The line for Pliny the Younger extending longer with soccer moms and asian foodies every year, Sunset magazine running spreads on Triple IPAs, disenfranchised cousins sending you TIPA links at work, ah yes.

last week fucked around and got a triple double

Sadly this beer is one of those 5% of TIPas that are actually exceptional. It is really good and still svelte to an extent. It never raises to a fusel problems, never stumbles into a dank american barleywine, and fails to oil its hop cones in the bedsheets. This finishes slick and woody like shop class, I love the weight of the mouthfeel and this lacquer closer reminds me of an amazing lemon pledge cocktail: that sounds gross but this is amazing. It has power and balance like a young Bo Jackson in his prime. The first taste is oddly clean with grapefruit and Twbgerine zest. This draped over the long line finish makes for a really great beer.

There’s likely nothing like this available at retail and this comes scary close to the Boneyard Notorious levels of God tier greatness. ISO this. Srs. 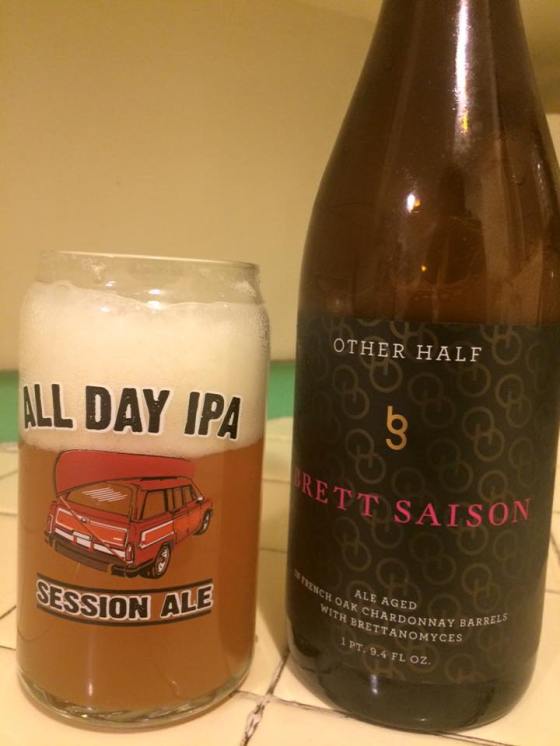 Barrel aged Brett saison
No brewery can be the master of everything, go try Hill Farmstead’s dortmunder and you’ll know what I mean. That sentiment is what gave me pause when I poured this other half saison, it looked pretty tasty. The nose was present and accounted for, some Brett c and cardboard paper, mandarian oranges. It feels genuine and inspired from a hop focused brewery, this can’t be right. The taste brings things back into the “pretty good” realm enjoyed by the likes of Prairie. This beer reminds me of a more tame version of Jester King biere de Miel, not overly sweet, not annoyingly acidic, a fantastic Orange Julius mouthfeel but lacing a haymaker to compel your returning attention. If this is priced in the $12 range, stock the fuck up like the T-virus was just unleashed on raccoon city. If this is in that ridiculous $20 realm, then perhaps it’s time to diversify your portfolio with some Vapeur or Blaugies.

So as to be expected, some amazing offerings, some forgettable ones, but in sum, Other Half is certainly worth a once over and there appears to be great things on the horizon.