I know what you are thinking, “how in the fuck is DDB reviewing a Thai wheat beer? Red ales? What the shit is this?” In striving to keep my finger on the pounding pulse of Georgia beers, I must divine the Terrapin tea leaves to keep the South content. Second Self opened fall of last year and already has two flagship beers and a canning line. Ok, so far so good, but these days everyone from Tree House to Other Half is kicking out dank ass cans, so what’s the deal with this?

A homebrewer who used to work at Sweetwater teamed up with a foodie and here we are.  Let’s hit that Florida Georgia line and start Sippin on Fire accordingly 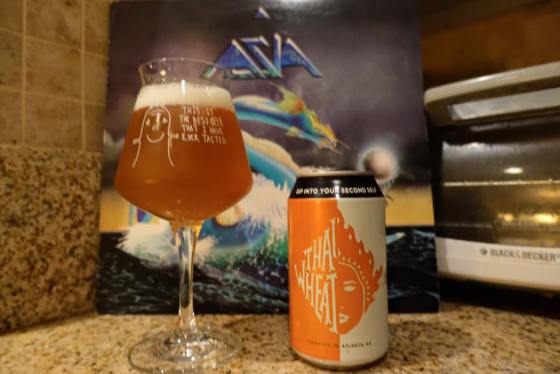 No relation to THAI ME UP, the incredible brewery from Wyoming.

“This SPICY American What beer is as EXOTIC as the country that inspired it. This beer uses both fresh LEMONGRASS and GINGER to give it a refreshing aroma and taste taking you on a trip access the globe. We keep the beer DRY letting the spices stand out on their own giving you a unique experience.
This flavorful wheat ale is great for an escape into your second self.
Pairings include: fish, chicken, pork loin, grilled vegetables, sushi, and Asian cuisine.”

The branding is pretty legit, but nothing as anus shattering as say 8 bit Pale ale

Usually when I see “Thai” on the label, that means it’s gonna be some obnoxious shit with cardamom, tea, or coconut milk added. It is often the ultimate red flag for discordant palate clanging. I also had a disposition based upon the marketing to place this toe to toe with Modern Times Fortunate Island, which is a horrible stance from the start because FI is incredible and almost no sessionable beers can run at that clip.  If it wasn’t abundantly clear, this was a donation box.

Before I get yet another question about this god damn Teku: this is an old Tired Hands glass. There you go.

This fulfills neither of the expectations and goes a bit off book into a novel, food based sort of riff. The pour is turbid and has a hazy orange frothiness to it like a blended sherbert Flinstones pushpop. The nose is grassy and herbal, it leans closer to “lesbian closet” replete with Birkenstocks, Darjeeling, lemon zest, burnt floral incense, and crushed Rosemary.

This isn’t some hoppy banger, but it is an interesting enzyme that seems to be lacking its substrate complex, namely a food pairing. The lock and key of this shit is entirely predicated on serving this with a variety of dishes because the spice feels like a tow line with no tugboat. Those nontug feels are real. It is fun and whimsical on its own, albeit not earth shattering and God damn is this crushable in that humid disgusting weather Georgia residents continue to subject themselves to.

BUT WE WERE PROMISED A REVIEW OF THE RED RED HOP RYE WATDAFUQQQ
I don’t have a whole lot to say about the red hop rye. It is a by the numbers hoppy rye that is kinda sappy and resinous that is executed like a watered down Nugget Nectar with more spice and a caramel meets “scorched DME” finish if we have any negligent entry level home brewers in the audience.  I am not a fan of this style and usually for a red to get my cones wet it will need to be clean and restrained on maltiness, this is hazarding a more substantial execution and isn’t peppering my angus as result.

subconsciously this label made me want some Orange Whip.

Second Self on the whole reminds me of a less inspired Modern Times, that courts higher mass appeal from less intense offerings. 4.5 trill units on the ultra trill trap scale (UTTS standard.)

I like Terrapin. I am not the biggest fan of hefs. So who will win this tug of war? Maybe people from hot humid ass areas know how to work that wheat stalk? It worked for Live Oak, let’s see if they can bust some thistles in today’s review. 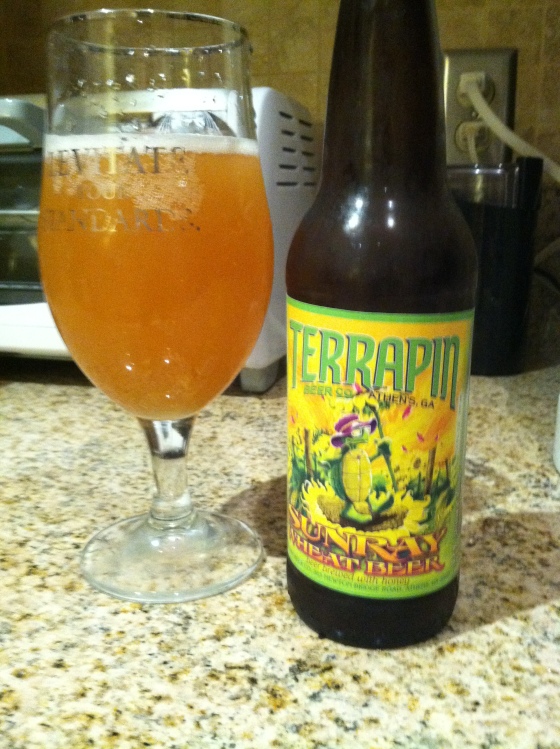 Buy a Tool poster, some incense, move to Athens, Georgia and get hella into toasting wheat.

A: Cloudy tangerine color, nice radiance to it, looks like Hi-C but with murkiness to it. Carbonation could use some work and the lacing is non-present but, for the style, that’s not a deal breaker. Again, it is like a sun ray in a glass, but the sun can also burn your eyes during a lunar eclipse so, there’s also that.

When I first popped open this bottle the radiance emerged, blasting my corneas to dust. The sun doesn’t fuck around.

S: Tons of nectarines and tangerines, a bit of a chemical tartness detected, but that could be from a variety of things. Obviously a huge wheat profile with biscuity cornbread notes. If you’ve been the hef rodeo, this is a solid bull that will get up on your orange haunches and give you a solid buck to your wheatstones.

T: The initial taste is sweet like a tangerine with a bit of orange hidden at the back, it fades into a foamy wheat profile that is expected but what really is noteworthy is the way that it just resonates for days with a genuine citrus note. This isn’t a citra/simcoe false citrus, this is like they actually squeezed it into the beer or something and it is really fantastic. This is a bit chewier than I desire for the style but that’s not to say that this is some malt bomb by any means. 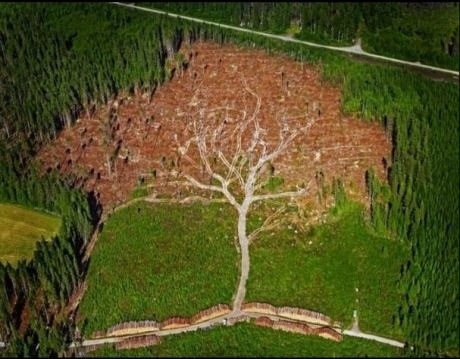 A sun beer for people who are constantly punished by the sun. The irony of nature is not lost on me.

M: I love the way the feel coats but just exits like a 7th grade drama student, promptly but making a lot of noise off stage. The juicy notes just sustain like a telecaster note. The hops are incredibly subtle as though they are a kinda of a negligent babysitter letting the citrus profile just run rampant. Overall, very accomplished wheat beer. Particularly since I find this style to be shallow and pedantic.

D: This is incredibly drinkable. I can only assume that they sell this in the south in no smaller than 30 packs given how fast it can be consumed on a hot day. I don’t even own a Mustang 5.0, but drinking this beer makes me want one to work on. I don’t even have to be doing anything, just lay under a mid-80’s mustang with this beer complaining about corporate fat cats. It’s that kind of crisp refreshness.

If you take down about 9 of these, you will feel like a complete hard ass, but then again, if you take down 9 hefs in session, you are probably an overweight Sigma Kappa anyway.

Narrative: Walter Burrs was the sweatiest turtle in the Splishy Wallows. His course obese hide spilled through the furroughs of his shell. “Hey….:::wheeze:: hey fellas…how’s the algae bed today?” The others groaned as he pushed his wide carapace in between them. “Whew, hot one out there today!” he bemoaned his thick fat terrapin breasts rubbing against the face of his peers. “Even the algae is warm” his sticky plastron rubbed against the others, making them exceedingly uncomfortable. “God damnit, it isn’t even hot! Why is he such a sticky fat bastard?” “Myommm nom nom” he exhaled while swallowing, his brow wet with a sticky, acidic sweatiness, his mouth covered in wheat grainy goodness. “Later we should go to the rive-zzzzz” he sticky hot breath billowed across the group as he passed into a grain coma.