LGVLABTOKF: Yorkshire Square Brewery. On Friday I went into @yorkshiresquarebrewery and ordered their new barleywine and it was fine, pretty solid. Part of my myopic approach was going into a spot that specializes in ultra traditional, gentle UK cask ales and ordering the hoppiest and highest abv beer that they make like a dipshit. Once I settled in and actually tried their body of work that they are known for, things made much more sense.

At most places, a soft export oatmeal stout isn’t my go to. It isn’t that something like a dark mild is a de facto bad style, it’s that most breweries don’t do them well enough to warrant your attention let alone serve them all on a series of hand pump casks. At this brewery it is the entire reason you go there because nuance is King, The oatmeal stout is silky, light, intensely sessionable with a touch of chicory and light roast. The mouthfeel really moves this right hand drive carriage, still in the body but creamy and frothy with great retention. Also, there is something endearing about a massive imperial pint glass and being able to drill ounces knowing that you can still make that PTA meeting. It’s very refreshing. 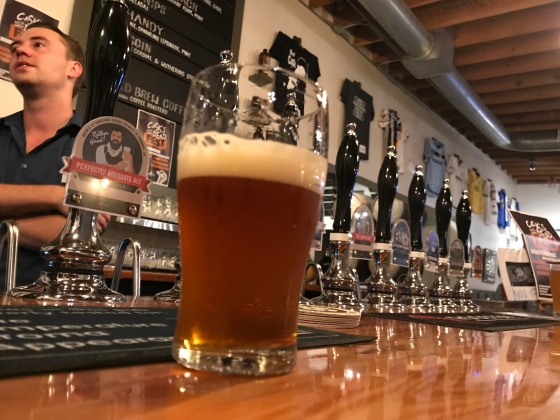 Think like @macleodale with leather interior and a sun roof, which makes sense since the head brewer here had his fingerprints all over that casky gem as well. Also, there were no children at this brewery and the entire place is dripping in English mood. If Phantom Carriage is macabre then this spot is apologetic, well mannered and named “Nigel.” It has a roaring fire and a straight up suit of armor inside. If there was a football hooligan with impacted dentistry then the experience would have been complete. Perfectly Adequate and Yellow School Bus [rip tomme Arthur 🚌] were an enjoyable cap to the visit. You should check this place out simply because there’s nothing comparable in my mind to what they are doing, and they are doing UK cask ales very well. #cask #ales #ukbeer #craftbeer #beertography

I’ll add the real time ranking later. Here’s a pic of the wings from Belly’s