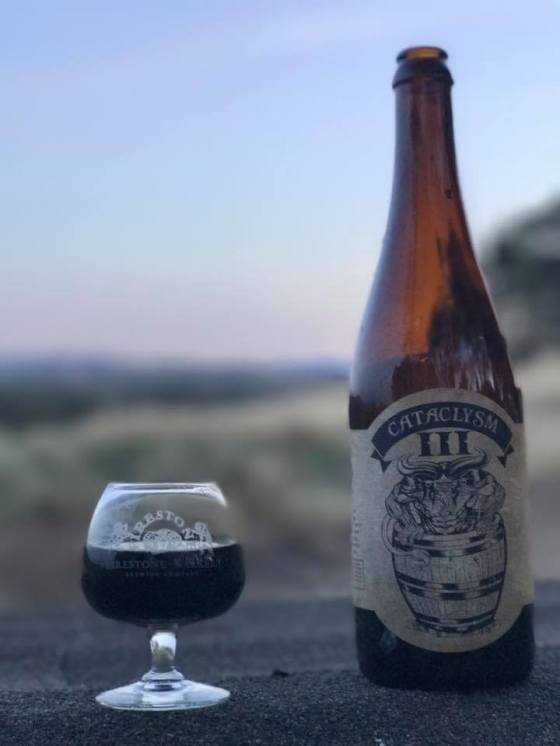 With any low hanging stylistic fruit, there will be innumerable bites at the apple from competing foragers.  At the outset, I must say that this is easily one of, if not the best beers from North Carolina.  Let’s treat Fonta Flora and barleywines as a subset for that last sentence.  This is a quality beer and the attention to detail is without reproach, however, there are some sharp edges to this boxcar that warrant sanding.

First and foremost, it is almost too big for its own britches and the lack of a syrupy underattenuation, while usually welcome, swings the bean pendulum in the other way and produces a sharpness and heat to the body that only ramps up at higher temps.  The nose is exceptional and provides mild fusel with wafflecone and madelines dipped in bakers chocolate.  The sheeting burns off due to ZZ Topesque legs and I don’t know how to use them.  Finish is dry with a touch of astringency mixing with the sweet lipid profile that is like watching your uncle open mouth kiss the mailman, inherently confusion.

The 14% abv is present and accounted for and this falls closer to the top of the pack than mediocre and I would assume that tastings outside of the south atlantic would report same.  The biascup overrunneth from local reviews but I can honestly say that this is very well done and absolutely tasty, albeit not those fatty purple post game gear drops your mind drifts toward in this ever-crowded confectionary genre.

Unfortunately for Cataclysm, I drank it immediately after not only one of the top 5 stouts I have ever had, but perhaps one of the best beers I have ever had.  Listen at DDB I butter my bread looking down on excess, leaning on adjuncts, people who chase hype, and Ivory Tower the fuck out of readers with a condescending panache of “you can always buy this instead.” It’s a tired refrain, I know it better than anyone.  This beer is a kick to the coconutsack because it goes rogue and operates in its own realm.  Not many beers really come close in a meaningful way.

Let’s try to grist out pithy complaints to galvanize this fucking coffee tub job.  First of all, prepare for pours to look pretty fucking disgusting:

I don’t think I have seen a brewery leverage sea monkeys yet, but here we are on full brine shrimp blast.  I am sure Dade County papa riders will toss floral crowns at the prospect of not using “synthetic” or whatever processes they imagine in the brewing process.  The coconut changes the entire mouthfeel as well and chunks of saturated Hawaiian tropic will cling to your lip like Pitbull’s dandruff.

Here’s where the depressing news kicks in: the closest analogs are also absolutely stunning and nearly equally apeshit to acquire.  The closed echochamber of stout economy creates this hilarious Dogecoin market that is both manipulated, then justified but unsuspecting salivamouthed dumbfucks.  Label us notorious is with 20% striking range of “as good” so you’re getting the 5 bedroom home but there’s no wood outdoor sauna by the infinity pool, so what’s even the point.

You get waves of medium roast coffee with an awesome extraction, like a cup of V60 ethiopian [yes I realize he used Kopi Luwak, calm down Florida, also calm down Creature Comforts reading comprehension masters.] The maple is less pronounced than the likes of

And I prefer it as a result.  For a label with more adjectives than a Barista paying her way through a linguistics degree, it feels focused somehow.  It was all a dream, in a vacuum is also dizzyingly excellent but Bake is that one asshole in class who skews the bell curve so high that everyone else is getting their stout asses spanked stop sign red for “bad” grades as a result.

The coconut melds with the coffee acidity and blends into this madeline dipped in espresso, and YEAH I AM NOT MAKING A MARCEL PROUST REFERENCE HERE.  You can go to TheFullPint if you want low hanging Proust jokes ok.

The barrel is seamlessly woven into the malt profile and it never feels flabby, or too oily, or underattenuated and it actually feels “relatively” nimble for its 17% heft.  It’s like when you see a strong safety who is all meat backpedal at staggering speeds. Ginger Rogers matching Fred Astair with equal grace, but backwards as they say.  Fuck this beer because it destabilizes both the levity that I had prepared and also undermines a good deal of the “diminishing returns” rhetoric that I butter my bread with.

Drinking Bake actually made me worse off, if we are being honest.  Any time there is a recalibration of what the top end of something can be, other entries have to suffer by contrast. All of these beers are very good, but then Ford drops the fuckin Raptor practically with a big old PUSSY MAGNET IN THE UNDERCARRIAGE AND NOW HOW AM I SUPPOSED TO CARRY THIS ERASER DICK HEMI AROUND WITH ANY SEMBLANCE OF SELF ESTEEM.

Fuck now I am depressed, let’s cleanse the palate with something positive:

Night Fury was a massive Michigan hypejob that got the shit pounded out of it, seemingly unfairly for all subsequent iterations.  And that’s sad. However, the most recent batch is actually really fucking tasty, original, over the top and dumb, but delicious. The good news is that the public distaste for the whole TraxxGate scandal now has this tasty peanut butter s’more delight at completely reasonable costs of entry.  If you were previously hesitant to give this a go, throw together IDK like 2.5 Treehouse cans and revisit these guys.  Unlike stupid ass Bake, this is an accessible, oily, delectable banger that has no clear analogue in today’s marketplace.  Peanut butter cups from the alcoholic at the end of the block who is always yelling at Sheila, the girl who lives in his garage and constantly accuses him of stealing.  Mmmm whiskey nutty butters.

In conclusion, this beer was also pretty tasty and doesn’t trade for anus prolapsing prices either:

Ah, a ray of positivity, I feel better now. This concludes our inquiry. Now go buy the shirt you khaki mouthed ingrates