Saint Archer is a difficult beast to roust.  Based on the ownership status, I have all these hilarious punchlines and PRO NANO CRAFT ONLY denigrations lined up, and then they go and turn out legitimately decadent treats.  What am I supposed to do then? Just put Marciano clothes on this effigy and put it outside my house as a neckbeard scarecrow?

Further staggering is the fact that these bottles are probably sold in regular ass bottle shops and grocery stores, the most “readily available to taste” ratio this side of Vanilla Eclipse.  So if I can’t grist out some yukyuks at the brewery’s distro, quality, or rarity, THEN WHAT AM I LEFT TO DO BUT SIT HERE AND PRAISE A BEER.  No one is trying to listen to that shit.  Then further compounding matters, you still have a cadre of pussyhurt ABVMZ holders who have these tinfoil hat conspiracies about how DDB legitimately gives a shit about kickbacks and pay2play.  So I have to deal with these khaki teeth adults who actually believe shit like that. It’s dicey territory giving a nod to basically anything, let along something on the western seaboard because even if I praise something from fucking Vancouver it will be declaimed as blatant HOMERISM

Alright fine, sit down, the accolade trolley is pulling away from the platform.

At the outset, I had pretty meh expectations for these two.  An imperial coffee porter, yeah sure, but then what?  The Tusk and Grain Series has approximately a 50% K/D ratio, which is enough to keep you in professional gaming if they noscope noobs that hard.  The coconut stout was legit AF, but then there are pretty whatevs offerings like the wine barrel Gose which compelled upward raised deltoids.

So first and foremost, adding Mostra coffee in anno domini 2016 is almost unfair. Brewers who leverage this roastery into their brews already have used the Konami code for 30 toasty delicious lives. It was like in 2010 when every brewer started leaning on Citra hops hard and making even mediocre beers look apeshit compared to dudes still stuck in the C-Hop era.  Same thing with mosaic and galaxy the years after that.  The coffee is so fucking phenomenal that with that alone you will clear an oppressive 3.8 Untappd hurdle from those expert NASCAR Stepdad palates.

This doubles down on those ridiculous espresso and mocha frap notes with a decadent caramel underpinning like that toffee ribbon that you excavate out of a Ben and Jerry’s pint you fat fuck. It remains on the balls of its feet, never flabby, a full malty kenpo routine of barrel aged plyometrics.  This shit aint on the Tony Horton diet.  The swallow is long and clean and reminds me of the even more phenomenal BA Victory at Sea.  It leads with a coffee food but brings a sacharrine chaperone unless things get out of pocket.

The whole experience is so lovingly tailored and presented with that almost continental restraint of old world stouts, Omnipollo notwithstanding.  The fact that this hits distro makes the FEDEX empire seem to be enduring relentless sacks from hometown Goths and Vandals.  Import trade must fall when domestic quality rises to these levels.

I am never one to embrace this position, but the adjunct laden hispanic barrio version is even better.  Think of how deft and poised those ingredients must have been done to get old DDB to admit that.  First and foremost, minus one thousand fucking points for this wax job: 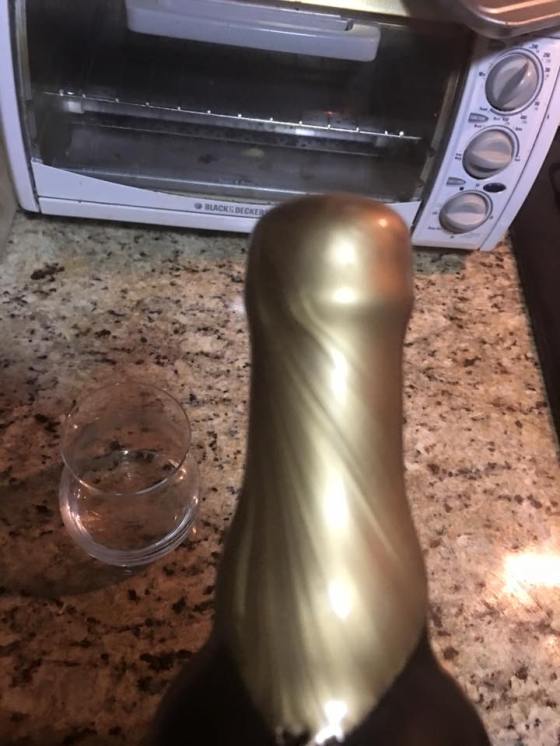 There’s no reason for this.  This can only amount to IRL trolling of the consumer.  I can imagine the two keg washers tasked with this, high on shatter pieces and ROOR hits, quad dipping each bottle and laughing to themselves.  Let me try to explain how difficult this bottle was to open.  I first tried a YOPENER and the blade didn’t work, so I got a Cutco knife and it made some progress but the wax makes a ridge that is so fucking deep you can’t even locate the cap let alone get an opener in it.  The .50 cal lip was way too small on that opener so I got flame out and had to sit there like some prometheus cicerone, mastering the elements.

Let me be the first to tell you, this type of shit is embarrassing to do in front of your wife.

Alright, enough exposition, I got it open and then had to put it back into the fridge because it took 90 minutes. 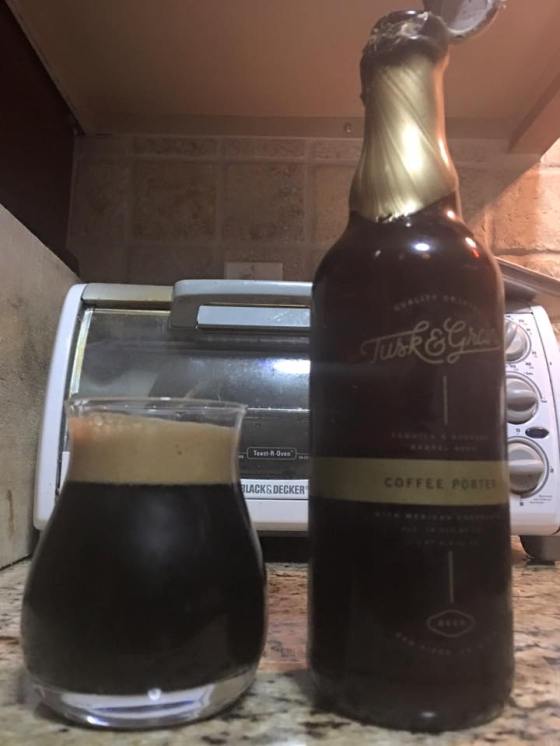 It was worth the struggle because god damn was this thing a treat.  I am talking on par with BA Mexican cakes, but prolly available at an AMPM.  Aged in both  Tequila barrels and Brandy barrels (component blended I assume since it doesn’t flaunt its DOUBLE BALS in a notably visible scrotum) they used that Mostra cheat code, and then added Mexican chocolate.

If you had PNC then you know the power that delicately massaged agave tones can bring to what amounts to a whirling dervish of dark malts.  The chocolate is more like baker’s chocolate and serves to provide a dryness and powdered cocoa structure to the backhandsprings that the barrel profile is performing.  All of the pieces just seem to fit and instead of being something you want to open with others to offload, pawn off, dilute the experience; you will want to merk this yourself like a classic revenge plotline.

The body remains distinctively porter to the bone and has that watery swallow without a massive cling and that actually makes the barrel and chocolate more fleeting and you want to dive back in.  It’s like those arcades that would suck your quarters in, you want to pump another five right into this cocoa-Turtles in Time.

The greatest takeaway is that this beer performs as an awesome BA porter first and then lets the other aspects round out the experience, whereas many other breweries seem to try to sand down the edges or imperfections with additions.

Buy them, don’t but them, I don’t give a fuck.  I am just trying to drive up my trade values for all these non-existent Saint Archer bottles in my non-existent homeristic CA cellar.