Since I am negligent and largely disinterested in dropping ~ $120 on a 4% bottle of fruited gose which I can only imagine is a bottle of acidic scorpions at this point, we look to greener pastures.

Thankfully, Wren House is turning out zero hype bangers for a populace as orange as the srm on this beer. The lightly brackish aspect works well with the fresh puréed aspect of the fruit and it drinks more akin to some Kerns juice than an alcoholic beverage. I can see myself in Phoenix drilling these with sun stroke onset after four holes of golf, my concealed carry clunking against the bar lovingly. Very refreshing and exudes a sort of Emergen-C and airborne type of snappy crackle to the body. Snap crackle pits. 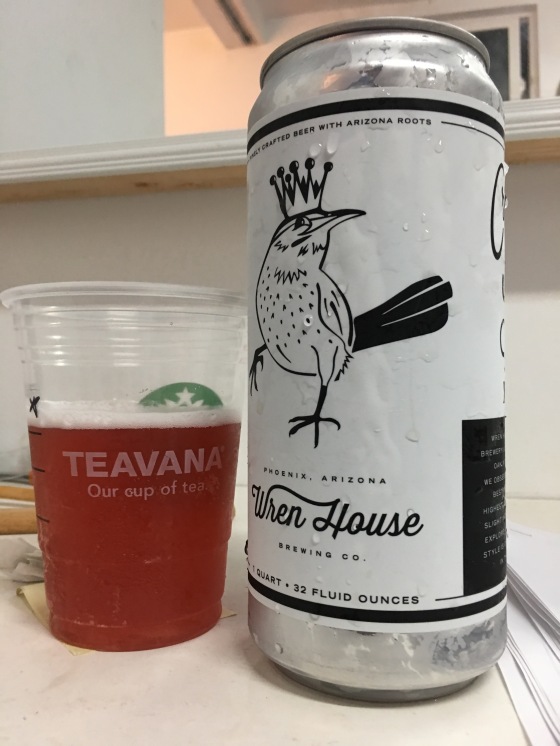 Lady banks, toeing dangerous territory making a hibiscus pink gose and using lady in the title. Someone with more mileage in their humanities degree might find the gender alignment upsetting with the name, I am more concerned with beer taste than poor taste. This is better than the apricot berliner and the floral aspect is done so well that it almost reminds me of a fruit blossom of sorts like the Sakura lambic from OWA. It has a juiciness and the salt is administered with a soft touch, resulting in an almost blackberry spritzer type of execution. If you have had Izze sodas, that’s a fair approximation. I killed this entire Crowler in the green room and there was much revelry. Shit was trill and off book.

Gary Soto ticks on deck, a pumpkin thief waiting in the wings. Ok stay with me, I know a pumpkin wheat wine on paper sounds like shit, but remember Voodoo CAUTION! Great things are possible. This is far less sweet than your average wheat wine and if you have PTSD White Oak sap nightmares, this falls far closer to an old ale pin. There is a degree of bitterness and minerality that works well with the barrel character, the whole thing is integrated like a Vegas dealer shuffling multiple decks. The pumpkin exists in the background not unlike a Hans Zimmer score, supporting the events instead of dominating them.

I can see baby palates complaining for any number of reasons the second you put anything in front of them that isn’t a vanilla stout, and that’s fine. DDB caters to a more deviant audience, this simply isn’t the pumpkin beer being discussed by categorically incomparable Will Gordon or the protoRones on Beer Advocate.

I’m doing naked diamond push ups in the punkin patch and the hayrides are free.

One thought on “Wren House Roundup: let’s wrangle some birds”