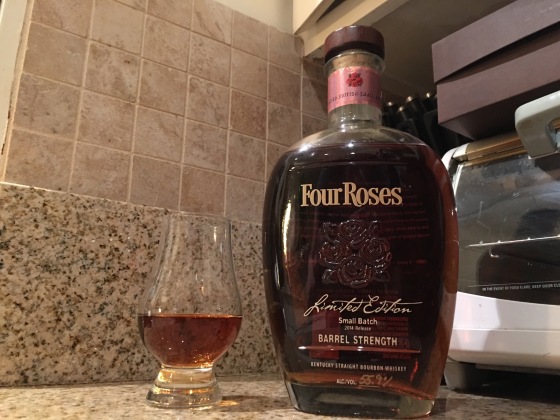 Ah the holidays, when your shaky teeth grinding step dad escapes to take silent pulls of mouthwash while concurrently examining your choice of obtaining an Art School degree. It is a magical time.

Luckily there’s wholly inaccessible bourbons to help pass the time, which between knife hits and oily dabs, the Christmas responsibilities pile up quickly. This is the 2014 four roses small batch limited edition offering from last year, a melange of choice casks from Jim Rutledge in his quest to give you that RutGut.

While your aunt drones on about the rising cost of cobra payments and your cousin with three kids opines that Obama is to blame for his inability to find decent work, you can take a deep pull from the cinnamon, red hots, toasted marshmallow and lathed wood in the nose. The experience is not unlike the oesk 2012 single barrel LE offering that was stellar. At some point, a distant relative will place his hand on your shoulder and in the pools of tepid Cooks champagne in his eyes will reveal that you look exactly like his deceased wife. That’s when you take a sip.

The taste has an awesome tempered 110pf profile that hits a perfect integration of substantial heat without feeling watery. A friend of a friend is explaining that she only has a single nipple pierced in case she wants to breastfeed with her children. In between the flora expanse of the mouthfeel you wonder what a suicide girl looks like with that epidermal ravaging of maternities past. The waves of leather and nutmeg rush along your bicuspids and the drag is like the allspice lacquer of crushed Xanax, medicinal and soothing.

No one told you what it would like to have a new step grandma and yet, there she is. You patiently allow the heat from big red gum subside as you savor the oak profile and rye content. Perhaps predicating your self esteem on allegedly valued libations is your own bulwark against that inevitable truth that you are derived from the same sour mash bill as these rickhouse anomalies. That power and position and packaging may be the only circumstantial devices separating you from the latent condescension of the yellow label counterparts. Maybe your blend isn’t worthy of attention, either.

Four roses presents the ultimate drink for solemn contemplation of your own shortcomings in the past year, and the ever receding horizon of emptied barrels floating you into the future. On a long enough timeline, everything becomes limited edition. Perhaps the falsely buttressed succor of a highly sought after whiskey can stave off the images of those Rick houses reduced to dust and your own crooked staves shattered by time, without content or meaning.

2 thoughts on “Four roses: the perfect holiday drink for when people criticize your life decisions”