Finally a wild ale even non-pedophiles can enjoy.

A: light cherry red hues with minimal lacing and carbonation that dissipates quickly. Capri Sun nailed it on this one and Hi-C is jocking so hard.

S: the Brett funk is present with wafts of wet hay and blankets. It is expansive and in the words of one observer, “something is rotten.” In my opinion, all is well and delicious with the aroma, considering the style. It finishes with cherry and tart fruit roll up smells. It’s like a ridiculously alcoholic recess sesh.

This beer is tempting, but dangerous.

t: Raspberries are present with a very sour mild drying effect that is not overwhelming on the sour. Overall is has very good balance and is incredibly refreshing. The juiciness has a strange tart nature with a crisp nice bite to the finish. The hops are completely absent, but they are not wantonly missed. Gushers for grown ups all up in my grill.

M: Put simply, there is no coating and the maltiness is similar to a lambic or a thin profile gueuze. You swallow and bam it’s over, all that anticipation and just a fleeting sour note, like most Brendan Fraser movies. 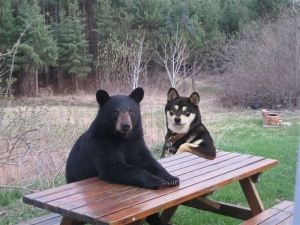 I want to sit around and be patient for more, but, I know it will never come.

D: This is a tough call because it is very drinkable but slightly drying after 22 oz. It reminds me of listening to a Dragonforce album, where at first blush you love every note and run, you praise the complexity but after a solid hour of it the wear and tear of the items all taking place at once begin to grate on you. It is hard to fault and, just short of Russian River and Lost Abbey offerings, this is incredible.

Narrative: Lola had this anxiety in her chest. A strange aching pain that began just after 6th grade that she couldn’t explain. At first blush it seemed like a mere tightness, or maybe just a hormonal inbalance, however, she began to realize some powerful changes in the following year. Now I present this not in a biological or coming of age way, to be quite blunt, Lola could reduce her size at will. It began simply enough she would exhale to relieve herself of the constant worry and tension and note her sprite figure diminish from her regular 5’1” stature to a 4’6” height. With practice in her room, she even could push these numbers lower and lower until at the crest of her 14th birthday she could rest comfortably sweet and refined amongst her massive pillows with her things. Her iPod screen showed full screen matinees and all over her childhood possessions took huge new forms. She was indeed as Lolita as one could be, ensconced in between the comforter. She giggled to herself when her mother came in and couldn’t find her amongst the folds. She was as sweet as the day was long but she held that tart little character, and an everlasting little secret.