Here’s a beer that I have had, oh, let’s call it 6 times and the picture you see below is the most coherent image that I have of this beast. That should tell you something right away. First and foremost, I love this beer, I love this style and it seriously goes head to head with Kuhnhenn, Arctic Devil and…ugh…KING HERNY GRUMBLEGRUMBLE. Anyway, this amazing beer is a treat, so let’s peep it out on today’s review to SEE HOW WIDE THE WINGSPAN IS ON THIS..er..MARK WAHLBERG HAS A STORM COMING. Just read it. 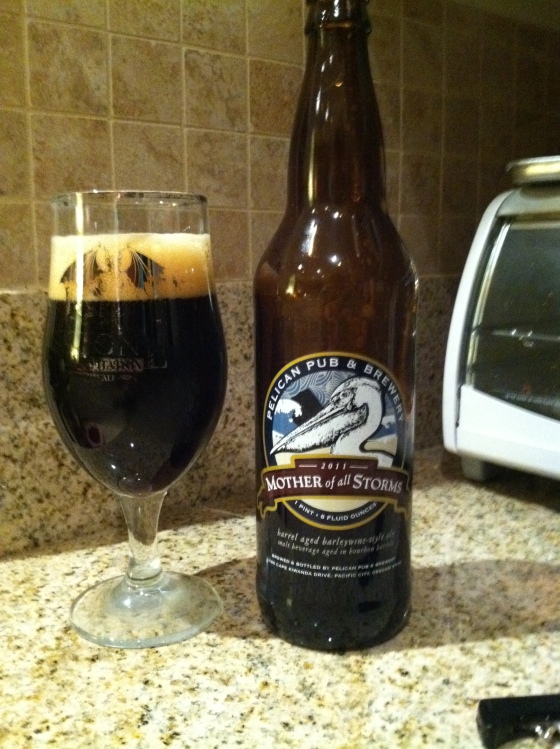 Actually it doesn’t look as bad as I remember, maybe it was my raging headache after merking this beast. Big pours, we do them.

Mother of All Storms, Barleywine, 13.5 abv.
Oregon all up in the mix, Pelican Brewery

A: There is an almost bourbon note to it. A mild agitation evidences a some small bubbles but it is clear that this beer is above you, much in the way that Hemingway never seemed to mind the banalities of a normal life. You rock it back and forth and all you see is a wafty character that coats with a scary liquid refusal.

At first I was hesitant, but I ultimately found the ravaging brashness to be a warmth.

S: There are deep bourbon notes that resound like falling down a mineshaft and hit every peat note on the way down. I don’t want to overstate the wood and bourbon but, wow, this is beer but it feels like a proper gentleman’s drink. This was made in Oregon but its spirit takes its summer vacations in the hateful south. It enjoys conifers in the summer and spraying down protesting hops with fire hoses in the winter. Too far? Ok, let’s stop turning barley wines into social commentary. This has a great heat on it and I don’t even want to age it because I like it for it’s bumbly angry presence. It rounds out this delicious dinner party with a fuck up that you can point out that is incredibly enjoyable.

T: There is a huge panoply of raisins, figs, mild dates and nice waftiness just like envelops like sweet caramel candy. I enjoy this immensely and the retraction from the huge fruits on the finish makes it all the more enjoyable, wait for it-

M: AS A RESULT THIS IS THE BEST BARLEYWINE THAT I HAVE EVER HAD. I know I know, this dethroned Abacus, no big deal, you hate Barleywines. Wait a second though, I like the following LESS: Hellshire, Old Dipsea 2009, Bigfoot, etc. This is hands down the most balanced and amazing barley wine I have ever had. I just want to sip on this and watch a Ryan Reynol- CLINT EASTWOOD MOVIE.

D: This is not exceptionally drinkable and, you know what? GOOD. This isn’t here for your consumption, this is like a Terrence Malick movie, it is deliberate, slow, deep and amazing. If you drink this alone you are a jerk. Plain and simple. This has such a great resounding spirit to it that begs to be split on a balcony and horrible philosophy discussions will ensure. It is just wafty, boozy, complex and amazing. The thin mouth almost makes me feel like “give me a cigar.” But then I realized that I don’t live in the gilded age, so put out the robusto Grover Cleveland.

Forget shaken baby syndrome, give your kids this beer, watch how amazing they turn out.

Narrative: All of the brackish land lovers said that this take was too ambitious. Sure, there was a school of marlin right off the coast heading for warmer currents, but, for gods sake, did you look at the meterology reports? They didn’t want to end up like the crew of the S.S. Stone Tea, rest in peace, who lost every member in this modern age refusing to deliver tea by protocol. No; no. There was a much more insidious secret that no crew member beyond the first mate could be made aware of. This marlin galleon was commanded by none other than a pelican. To be fair, he was a completely able captain with a curse placed upon him by a Portland witch who converted his form to the omnipresent visage of fertility, well knowing that he was impotent. That, my friends, is a story for another day. Sure there was a cool pressure from one direction and another front with conflicting warm pressures and, wait, who is manning the sextant? Oh that’s right, a pelican. Their cargo of 1200 barrels of bourbon and figs might never make it to port but one thing was certain, with this capta- BGLUB GLUB:::GURBLE::COPYRIGHTGURBLE