Well, once again I went to the brewery to get this 3000 case “shelf” release, since California 1) never gets Firestone bottles until 2 months after release and 2) assholes buy them up and complain about Sucaba afterwards. So basically, fuck California. So I traveled to beautiful Paso Robles to snag some of these oaty drops. The population of migrant workers harvesting grapes for overpriced wineries was SURPRISINGLY UNCARING about the release of this barrel aged oatmeal stout. It is almost like being paid crippling poverty wages for the production of luxury goods DOESNT MAKE THEM APPRECIATE A GOOD BARREL AGED STOUT IN THE 101 DEGREE SUN. Weird. Anyway, let’s review this shelf turd and pick out the finest pubic replacement fur. 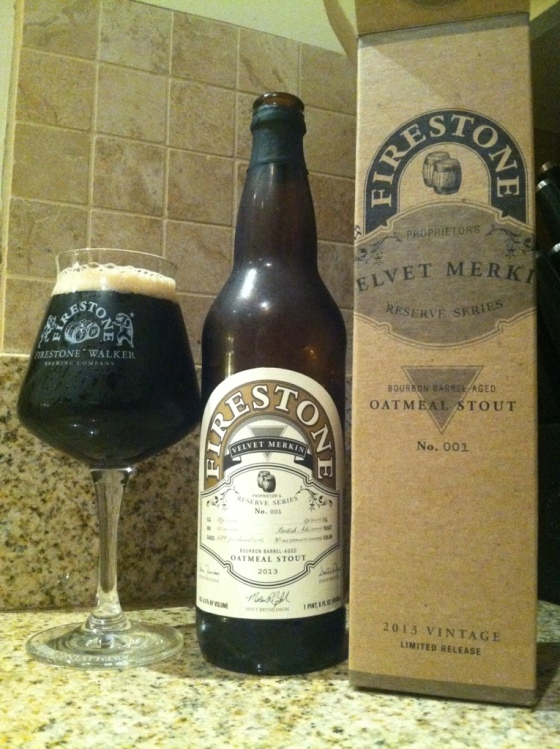 You guys, look at the subtle triangle on the box, you get it? Oh man. You don’t even get it.

Label nonsense:
This is our Velvet Merlin Oatmeal Stout aged in Bourbon Barrels and it just won the 2010 and 2011 Gold medal at the GABF for barrel aged beers!!! This beer goes into the barrels as a roasty dark chocolate, coffee accented mild mannered stout and comes out transformed as a milk chocolate, smooth dark cherry, vanilla and coconut infused masterpiece. We are incredibly proud of this beer and it seems as though it was always meant to be a barrel aged brew. 100% Oak Barrel Aged

A: This is a splishy splashy watery stout affair that links arms with gentle BA stouts like BASC and Event Horizon. In fact, basically any stout from the Carolinas will know this feel. Low abv, slick washy blackness that is a deep brown at the edges, straight entry level stout game for the babypalate haters who can’t dome BCBS and then pick the kids up from school. The cling is awesome and them oats just grip the edges like that 3 year old who wont leave the grocery store because he wants Skittles or some shit. Nice carb and great retention, but it is an oatmeal stout, what were you expecting?

Go to the store and stock up on bottles

S: At large, the whole affair from top to bottom feels like “Parabola Lite” in execution. That is far from a bad thing. Don’t interpret that as disparaging in any way, it is just different. Sometimes a 13% Parabola right before a Parole Hearing is a bit much, we have all been there. This is like instead of going for the 911 turbo, you opt for the stripped down Cayman R. Both have a certain appeal, neither is deficient. You get a muted bakers chocolate, cacoa, light roast coffee, mocha frap meets bourbon but the bourbon is as soft as a feather duvet just lowering its head and letting the roasted malts do all the talking. Again the whole thing is like a gentle handjob that is pleasant, but will bring you nowhere near completion.

T: This again is like Parabola dialed back, a support class mage, low DPS, healer stout that provides support instead of going tank steeze. You get the toasty refreshing malts, I know that’s a weird dichotomy. There is a bit of vanilla and baby doses of char, in the background you can make out some oaky presence but none of those elements are really in the game in a serious way. Sometimes cornerbacks can make amazing plays, but they usually aren’t putting up crazy fantasy numbers. Then again I know shit about beer and sports, so caveat emptor.

It is all fun and games until that ABV bite kicks in, secretly.

M: This is the most fantastic part of this beer and the only part that excels in light of the masterful big brother, Parabeezus. The silky oats give this satin sheen for the mouthfeelings. It just coats and leaves a nice sheet of creaminess that isn’t quite like nitro steeze but still amazing and whipped up like yayo in that baking bowl.

D: This is also more drinkable that Parabola due to the lower abv, cleaner finish, and silky mouthfeel. However, that is kinda like saying that a Mercedes SL is more driveable than a Murcielago. Some things are worth the inconvenience. This is just a different tool for a different job. If you have clitoral friends who complain that parabola is too “boozy, hot, thick, sweet” or some other ignorant shit: show them this. This is incredible in its own right and perfectly executed in so many ways, but it just isn’t that big beast that I have come to love being manhandled by. You know like when the stout grips your wrists and you secretly love the dominance OH OK I AM THE ONLY ONE ATTRACTED TO MALT POWER FINE I GET IT.

Narrative: “PLEASE STACY, that is my grandmother’s Faberge egg collection you just NO! NO!” Anthony could only watch in horror as his girlfriend gorged herself on whiskey and oatmeal, destroying their possessions with careless abandon. “OK NO, now you are taking things too far, do not push my Body By Jake off of the balcon- NO!” Things weren’t going so well for the couple, she drank more, ate more chocolate, drank more bourbon, and broke his things as a byproduct. What was Anthony to do? The sex was amazing and she was his special Persephone, delving each night to savor the succor of sour mash and destruction. As bad as things were, she was still gentle compared to her older sister, who would ravage his bent genitals on a nightly basis. “Please, I have all of my FINAL FANTASY SAVE GAMES ON THOSE! HOURS OF! NO!” Somehow, it all evened out, she was sweet while sober and a complete monster when unleashed, but he liked it that way, secretly. “EARTHBOUND IN THE ORIGINAL BOX! NOOOOO!”