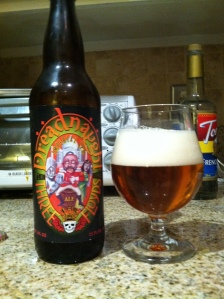 She dreads me. She Dreadsmenaught. But then again maybe she wiiiillll....

A: It has a bright cloudy tangerine and orange haziness to it, lots of foam with huge carbonation. The lacing is thin but the whole presentation is great. It is a top 100 gem and I want to to be not as good as it is, but damnit, it’s another non-California DIPA that just owns.

S: It reeks of huge grapefruit and tangelo notes, some mild orange rind dryness, and almost zero herbal aspects to it. I have given this to sceptical west coast friends and after their facial reconstructions from hop assault, they were into it. Albeit horribly scarred.

T: The taste almost directly mirrors the smell, which is surprisingly rare in IPAs this big and complex. It has that great juiciness of Sculpin, orange notes, a strange tartness similar to grapefruit or unripe tangerines. This is incredibly refreshing and the abv sneaks in like a Trojan horse. THAT’S NOT THE ONLY TROJAN THAT SNEAKS IN IN THE MIDWES- just kidding they don’t use birth control, you’ve seen their kids right? Ok cool. 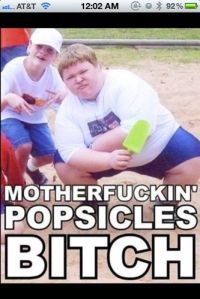 You think its just gonna be a standard balanced IPA affair, then it rolls all hard on your bitchass.

M: The mouthfeel is a bit bigger than the standard DIPA but it doesn’t toe into that disappointing maharaja range with excessive coating and chewing. This beer has an exceptional balance, but then beats your ass with hop cones. A strange note that needs commenting upon is how good the bubbles feel. They somehow hit an exceptional attenuation/carbonation level. Three Floyds consistently delivers exceptional products and this one delivers. Not trying to sound all tough, FINE I LIKE THE BUBBLES OK.

D: This is clearly exceptionally drinkable but the lack of availability, price point, and high-ish abv seems to draw away from the universal applicability of this beer. It is a world class but it as far as the epic DIPA class goes it is certainly not best in show. Overall, a great beer and the Midwest has a viable answer to the west coast giants.

Another DIPA that doesn't make distribution to California, what a tease.

Narratives: Shire Grassmuggins was not an exceptional piece of feudalism. It got exceptional amounts of rain and had incredible turnip yields, given the time and labor constrictions. Serfdom never exactly produced the most diligent workers, but, as far as 13th century economies went, Grassmuggins was a solid performer in a bull market. The workers were diligent and took religious holidays often, but the field was almost conscious of its need for crop rotation. The crude tools yielded amazing produce but the soil called out for minor improvements. The wind through the reeds seemed to scream to the peasants for basic nitrates through fertilization. Alas, this shire must let its latent glory remain unknown to other regio