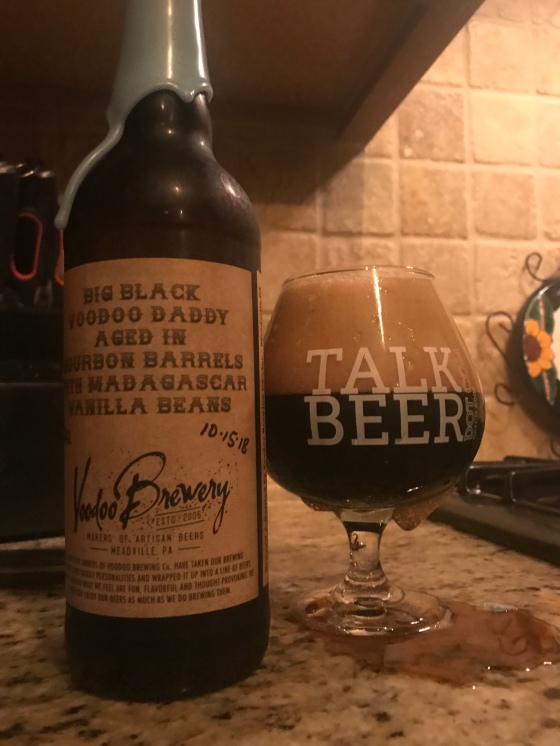 Voodoo has a pretty wide aperture for amazing barrel-aged strong ales. Within their own library, some are better than others, but as a canon, they are universally solid.  From the best pumpkin beer in the god damn world, to the inimitable Black Magick series, or their shredding riffs on barleybangers: their legacy is secure.  That being said, I have never really enjoyed the Big Black Voodoo Daddy series.  Part of me always associated it with the base beer, which is a pretty okay treat, but I never felt it was a great canvas for barrel expression.  The malty confines of the interior do not lend itself to stavey aftermarket modifications. I know we joke around a lot about dudes in cargo shorts trudging up to taprooms complaining beers are “:::labored breathing:: TOO THIINNN” but that’s exactly my whole grip with BBVD as a platform.  When I say it’s svelte, I mean that it is dialed in akin to Central Waters or Beachwood in execution.  This isn’t a failing in the brewing execution, it’s a clear intent to make a separate line from the Magick series.  There’s nothing wrong with that.  Not every brewery has to be some tired Floridian chocolate fondue with the only difference the order in which the candy was added to the boil. For that reason, I never LOVED Grande Negro Voodoo Papi or the different iterations, but I am in the minority here because most people are jazzed about those.

Now enter the vanillazone.  In a strange twist, the sylphlike body actually works in tandem with those niller tonez.  For the reason that 16 plato finishing beers can seem excessive when you add ANOTHER confectionary item to them, Vanilla BBVD uses it as a supporting character.  This beer has a lovely roasted pumpernickel and toasted caraway seed and low sweetness. It feels european in execution and the relatively high carb makes the waft of the vanilla oils more prominent and actually counter balances what would be a thinner, roastier stout. The end result is the final cakefinity gem that is balanced, as all things should be. You can crush the entire bottle no problem and it never feels excessive. This is one instance where it feels like vanilla in ZANGIEF would be too much, but when draped over the shoulders of BBVD, the magazine slides into place. It isn’t American excess, nor is it a stoic Swedish adherence to tradition, these Meadville hucksters occupy somewhere in between that penumbra and it’s an extremely tasty beer, even if it doesn’t wholly bisect your bean with DME, lactose, and pure cane sugar.