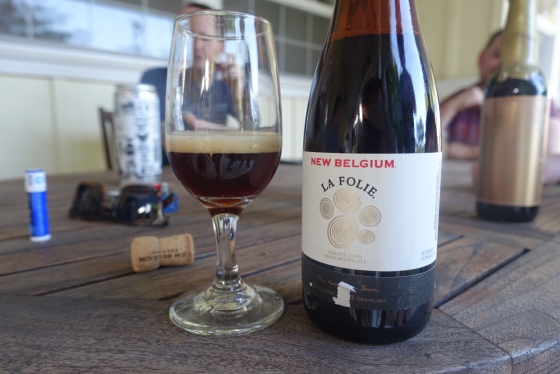 If you bring up La Folie, you’ll usually get one of two responses: 1. old balls: “ah that and Duchess were what showed me my love of sour beers and ushered my palate into the realm of American wild ales” OR 2. tight coinpurse: “I got that at Costco last year in a bomber and shit wasn’t even that sour.” I can appreciate both takes on a beer that had a huge formative influence for the old guard, but perhaps the pasteurized version lost its luster with dudes who two years ago were drinking Rogue in undergrad. Back in 2011 when DDB was set on knocking out the OG white whale list and the BA top 100, there were three monumentally important beers, all sharing this La Folie DNA: twisted spoke, Bottleworks 10th anniversary, and the now unobtainable Falling Rock [fn1 – if you have access to one of these, please tell me, it’s a ghost from my past I need to destroy its grip on me.] The main point is each one of these were some of the most sought after beers in the world, in the Pre-Pastry Era (PPE). Yeah, people were legit drinking fucking Flanders Reds and boning raw dog. It was wild back then. Anyway, the heart of these beers was the old brewery only cage and corked La Folie. The deal was, the C&C La Folie had tiny runs but they were also NON-PASTEURIZED. I had a 2009 that was straight red wine Vinegar and a 2007 that was Alexander Rodenbach divinity juice. So they vary. Anyway, on the new tiny foeder system, Lauren Limbach’s doing tighter, smaller blends of La Folie in like 60 hL batches. Back to the OG labor intensive shit from the early 2000s. Alright enough rubbing those Colorado nips, how does this tiny format ratchet taste?

Really fucking good. It bears noting that this is probably the oldest sour culture in continuous propagation in America, not sure if that makes ur pellicle bubble. This beer is technically an Oud Bruin but it falls closer to a Flanders Red in my opinion. It doesn’t have the acetic character, or the Korean nail salon meets aquanet shit that occurs in its bigger brother and in extreme examples, some mid-canon Bruery beers. The nonpasteurized version is worlds better than the regular la folie and imparts a silkier mouthfeel with graceful crushed linen carb. There’s currant and black cherry with a wispy creamy sherbert aspect to the swallow. The malt backbone is present as well and never feels like some balsamic cucumber salad. The nose is a massive bouquet of ripe cherry, oak, merlot, and blackberry preserves with that dangerous but light touch of acetic aspects that are endemic to the style itself. The whole thing just bangs and I hope this will wrangle some people back to examine the smaller, more fun side of New Belgium that isn’t shelf corpses like CITRADELIC. If you see this, give it a spin, it’s gonna be way way better than you anticipate, and if you have a goopy old scrotum, it will segue perfect perfectly into your WANDERER BATCH ONE story.