To drive down intentional clickbuxxx tactics, I try to wrangle posts into some sort of thematic order so that people aren’t constantly dealing with an IV trickle of annoying 300 word write ups.  People don’t want to come to DDB any more than I like writing it, so let’s get some of these recent ticks out of the way in a completely shotgun fashion, buckshot in the side of that Honda Prelude. 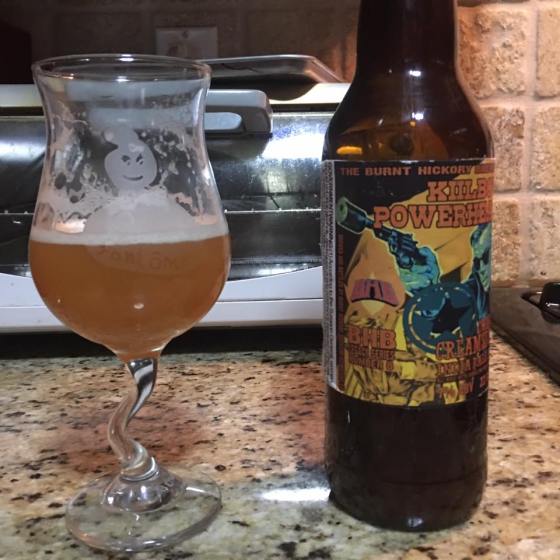 Burnt Hickory Brewing, Killboy Powerhead.  I hope so badly that this is an Offspring reference, but it prolly isn’t.  Alright so this is one of those “Food transmuted into beer” offerings that the South is so enamoured with.  It is an IPA base, specifically the Didjits which I wasn’t a huge fan of, but get this: this beer is much better than the constitution of its base.  The orange and vanilla hit the marks exactly as advertised and it tastes dead on like a 50/50 Dreamsicle with a creamy lipid oiliness to the watery swallow.  The worst part of this beer is the hoppy underpinning from the Didjits, contributing some needless french pressed Christmas wreath and chard sort of tones.  It’s like taking grand marnier and dumping a shot of Fernet Branca into it.  If this were a tripel base or a belgian golden, shit would be creamy dreams, not Wes Craven alpha acid nightmare on Hop Street.  In sum, a pretty legit beer that is tasty albeit flawed.

WOOD YA HONEY. At the perfect nexus of “taste” and “should I open a Fedex account” lies this economical masterpiece.  Not unlike the other silently amazing Jackie O’s offerings, this winsome wheat wine has a deep barleywine meets old ale pump with a sticky sweet agave/honeycomb profile that makes it absolutely remarkable.  The likes of Surly SYXXX, Bruery manifestations and Helldorado have subverted the expectations from this style and god damn if this isn’t a honey redeemer with a flaming Azrael sword.

You get the sweetness you’d anticipate, buttery biscuit and brown sugar, but the barrel profile and relatively thin body make this a swift and nimble experience without letting fusel notes grab the reins.  This might be just the thing to suggest to your baby palate friends who only drink stouts and eschew the majesty of the barleywine master race.  It is redoubling that this beer is usually in a trade list of “PICK THREE OR FOUR JO OFFERINGS” and I am content with people overlooking these, all day long. 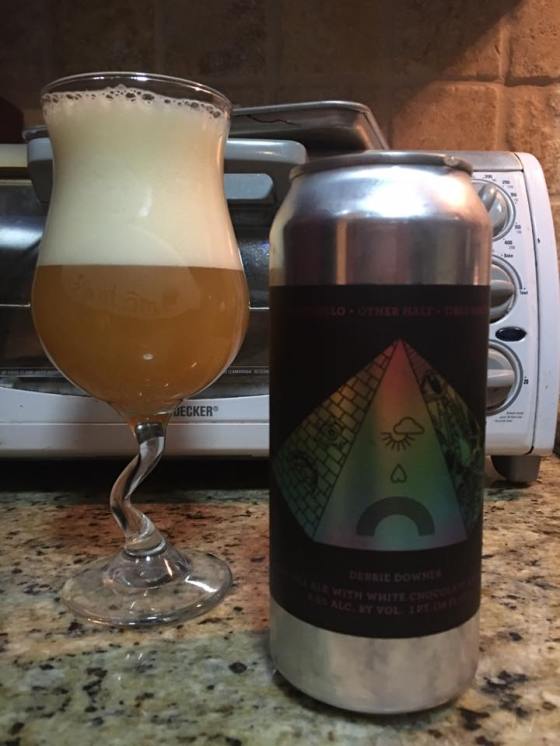 I don’t know who to give “credit” for this one, Other Half? It certainly is their frothy body and massive carb that is present and accounted for.  Tired Hands? the apeshit white chocolate surely wasn’t an NYC invention, that greasy PA nibs profile pangs of Ardmore. Omnipollo? This odd palate mash up sure seems European, adding mango to his mishmosh, human centipeding flavor profiles together in a clunky, first tinder date sort of way.  At the bottom of this madness is a solid IPA, you can reach through the pile of used syringes and find the antidote.  However after suffering so many pricks from sickly sweet white chocolate and mango, you leave far more infected than you began. Both mango and chocolate vie for stage time and upstage the mosaic/pineapple/natural bounty of the tangerine underneath.  It feels like a less exact version of what Killboy Powerhead did better, supra. All of these brewers individually make great things, but uniting great minds can result in things like Howard the Duck. 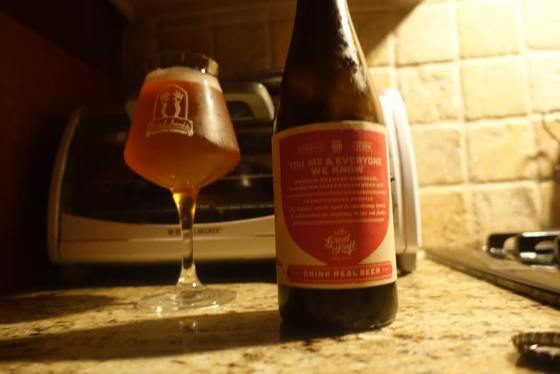 If you follow DDB, you know that I have a serious soft spot for this Louisiana brewery that is criminally overlooked: Great Raft.  The label to this beer confused the shit out of me and I didn’t know how to take it, is this a wild ale? A saison racked to chardonnay, but then brett is added but then Mayhaws are added but then citra is added.  What in the actual shit. The takeaway is surprisingly simple: this is off-label Cable Car in many ways.  I know, many people have an axe to grind with the retail/secondary cost of CC, I get it.  But this tastes so goddam similar to CC10/12 that it is hard not to draw a Shasta/RC Cola parallel.  This has the grist and light sweetness attendant to some of the other Cable Cars, it has a faint acidity as though there was a bit of Flanders Red componently blended, presumably from those Mayhaws. There is an awesome Brett C unpinning this like brie rind with old newspaper. The swallow is like POG juice, never hitting the gumline and remaining restrained and crushable with the foregoing depth and nuance.  No one will care about this beer, but Pepperidge Farm remembers.

Fear not: Other Half is still turning out world-fucking-class DIPAs when you strip them down to the NYC Emperor’s new clothes.  The carb is their signature silky egg whip froth, there’s blasts of mango dipped in vape oil, shallot and clementines, and this weird upfront carb that immediately pays deference and lays down for max crushability.

JUST LOOK AT THAT COME ON.

You remember how inspector gadget had that minivan that would turn into a Countache? that is how this rolls, intense fruit that converts into drippy cones and crystals without being cloying at any point.  Brooklyn hipsters already are bridge and tunneling the fuck out of this beer, so the less I say the better.  Suffice it to say, there has been no dip in quality in the core offerings from Other Half, just avoid the OTHER other half nomsayin.

On paper this looks urethral shattering: Trillium, Omnipollo, coffee, vanilla, OHLAWD. The fine print needs to read: also v. imp. Cardamom.  A dash of Downey dryer sheets go a long way and this beer would absolutely benefit from barrel aging to temper some of the absurd spice notes.  The base beer is also novel in a continental European sort of way because it embraces that black patent malt with the deeeep roast that may be offensive to the American brownie-mouthed sensibilities.  As a result you get tobacco, and blackstrap molasses akin to Abyss, with coffee and vanilla being narrowed out of the iris.  This is by no means a bad beer, but it is an unfocused ensemble cast that fails to wow.  Patiently awaiting a BA version, like so many people tapping their foot for Halflife 3.

I had to look up wtf piloncillo is, and I am pretty sure it is just cooking sugar like Panela. Thankfully, sugar is not something this beer exhibits in any meaningful way.  With the frothy elegant panache that Mexican Cake’s body exhibits, with a chili ooompf akin to Grande Negro Voodoo Papi lies this huna-stomper. It has a decadent mole approach that follows with a bakers chocolate finish that never hits a syrupy realm or Cinnamon Toastfucks your mouth with spice.  If anything the chilis could use some slight ratcheting in, but I know there are some deviant sting-ring lovers who will embrace with will full O-ring. These guys have been doing magnificent adjunct forward creations so it follows that this would be a most restrained and dialed in version of the Floridian oeuvre.  I love that hot on the heels of Mexican Speedway, their SD neighbors stomp that beer without any barrels.  Great things coming down the pipeline from these guys, although I would like to see some more straightforward offerings before I give full papal-DDB clemency to the Abnormal crew.  We shall see.

Wicked Weed is a one trick pony of sorts, but holy shit is that AWA trick an impressive dressage.  I have this next to CFP Cherry and, while it wasn’t quite as refined as the Casey offering, it blew me away how much this brewery has developed since I checked in with them a year ago.  The cherry is radiant and hits like fruit leather and home run pies, dried out in the sun with this awesome gristy underpinning that never became too acidic and straddled a fruited wild masterfully.  In the way that New Glarus is a fruit profile master, this beer does a great job with it without pushing for the depth of some of the absolute greats.  Is this as good as Balaton? Absolutely.  Is this as good as Montmorency vs. Balaton? Hold your horses. Complain about their price points all you want, this is worth the cost of entry all day long. 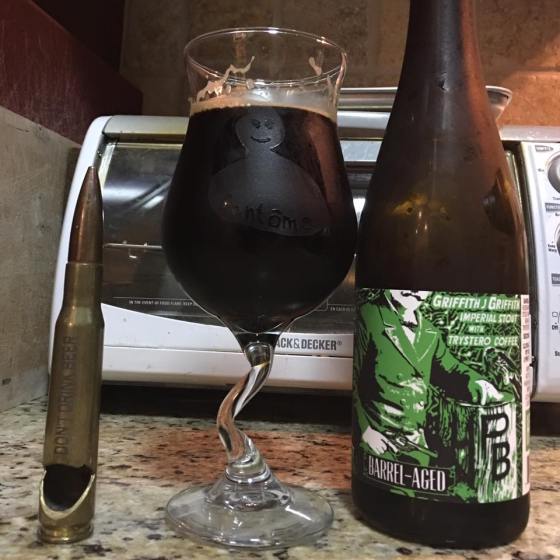 Speaking of slept on, world class gems: holy fuck this beer.  Let’s be honest and admit that batch one of this beer was tepid, low carb, low body, coffee bomb with no real barrel interplay.  I will concede that all day long and my expectations for the HPB “big beer” segment were tapered.  Then this, entirely different, butthole shattering beer comes out.  It literally has nothing in common with batch 1: it has a massive heft to it akin to something in the Side Project lineup, the coffee is intense but allows the mallow and vanilla from the barrel to shine, it coats and has this lingering delicious marshmallow dipped in espresso swallow to it that is on par with Rum BA Caffe Americano.  I wanted this beer to suck, but, holy shit this review became a lot more complicated to write once I opened this defiant, petulant reiteration.  In cinema parlance I don’t know if this is a spiritual successor or a reboot of the franchise, but Chris Paul, this is a franchise nonetheless.  Absolutely seek this out, seriously, I would be shocked if you found this disappointing.  At 2pp, 800 bottles you can probably land one for like half a can of Treehouse.  CA traders, the Red Cross of the beer trading world.  Where will they send a thankless proxy aid box to next?

Alright this post is long enough. Most people just come here for the pics and stay for the tittyfucking jokes anyway.  At 1600 words my Goosebump-tier readerbase needs a chapter break, or at least put the font in Arial for them.

EDIT: I will do the PNW beers together, I have too much to say about Fremont and Holy Mountain’s new stuff in this meager post.