First and foremost, thank you for being a friend. Today we have a wine barrel aged treat from those Verde Mont ballers, ostensibly it is a pale ale of sorts, but on the low, the base beer is basically an aggro-hopped saison.  Lesbihonest.

The first couple batches of Dorothy weren’t my absolute favorite in the Hillsboro lineup.  There was a sinister pine and weed resin to them that was a touch too sappy in execution when placed against the innumerable other phenomenal offerings.  Different strokes, palates gonna palate.  However, Hill Farmstead’s barrel program is basically that machine that transmutes Urkel into Stefan. So what happens when you give the appellation shortening treatment to Dorothy’s sticky oily bones? Let’s find out: 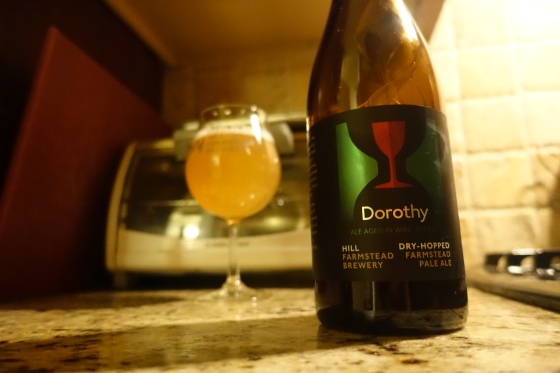 At the outset, you will have to field quips from some dumb fuck who notes with NASA precision that LOL THE HOPS IS FAED IN THE BARREL. Yes, thanks for pointing out that blunt, completely fucking obvious epigram. However, the tradeoff is well worth it in this endeavor as I will swap the composted leaves of hops for an elegant wine barrel complexity every day of the week.  The look of this beer is exactly what you would expect, that radiant rubbed brass infused with milky microcarb that clings in rings like your rectum on exiting anal beads. The rusticity units are off the scale with that frothy microcosm of beautiful particulate suspended in the substrate like an entire economy of agrarian sea monkeys toiling under the barrel aged sun.

The nose has tempered the hoppy profile of the base beer in a fantastic way.  It ratchets back all of the pencil shavings and raked pine needles in lieu of this ebullient sun-soaked linen, white grape, tangerine zest, and grand marnier waft.  I wasn’t expecting this oddball to enter the realm of Floras and Arts, but it is unquestionably throwing hoppy grapples in the same weight class.

The taste is exceptional and the foundation is nuance and balance with every slab of oaky concrete laid. There is this refreshing dryness like pear skin, but with a sidecar containing a christmas magic, fir and spruce scissoring lovingly with the oak profile.  It is bitter but has an faintly acidic hype man laying down a sick back beat for these creamy 16s. It exceeds and accomplishes what Sue sought to do, integrate the depth of that hoppy dab but loaded into a classy bedazzled oak rig.  Fatty clouds of wine tannins fill the cafe, all the sommeliers are lit AF, dunking macaroons in Chablis.

It fails to reach the post-storyline epic loot akin to Art, Ann, or Peconic, but it stands out.  It’s like picking Dazzler in the 6 person X-men arcade.  People might talk shit, but it lays down a different kind of palate beating that is elegant and sexy.  The result is a product that surpasses the base beer so completely that it makes you question the need for the existence of the base beer at all, that Dark Lord syndrome.  That is a good problem to have, when your own products define the parabolic arc of your ballistic farmhouse aims. We all thought Gratitude was better than hard boiled quail eggs, that is until BA Grat came out and made our hoppy conditioned boners so hard that a kitten’s claws couldnt scratch them.  The barrel aging makes a massive difference and I can’t return to the likes of Noble King or the Holy Mountain riffs on hoppy saisons without this in my periphery.

Since you can pick this up for half the cost of entry as Art, it is a no brainer that you absolutely should seek this out.  I can’t think of a comparable American offering that fills the interstitial gap that BA Dorothy does.  Maybe if you french pressed BFM x225 with some montueka? However, minus points for not calling this beer
“DRO” it practically writes itself. COME ON.