Boy New Jersey sure has drummed up some substantial fanfare with these endless iterations and riffs concerning the impending Dawn.  At first blush it appears akin to something from the protean Bruery playbook from years ago, or the nascent Floridian scene of modern day. Stout + additive = flavor profile that feels safe and welcoming for all.  This path of monoaesthetic expression is the hand holding that many people new to the game so crave and require.  Take those bold brassy notes from the stout world and smash them over the head with confirmable profiles from things that the average cicerone, so aching to be an overnight expert, can point to on a label and confirm the sage learnings of his palate a full 18 months into the game.

But how do these Kane gems perform in the light of this Chopin Awakening of self-assured consumers?  Let’s find out. 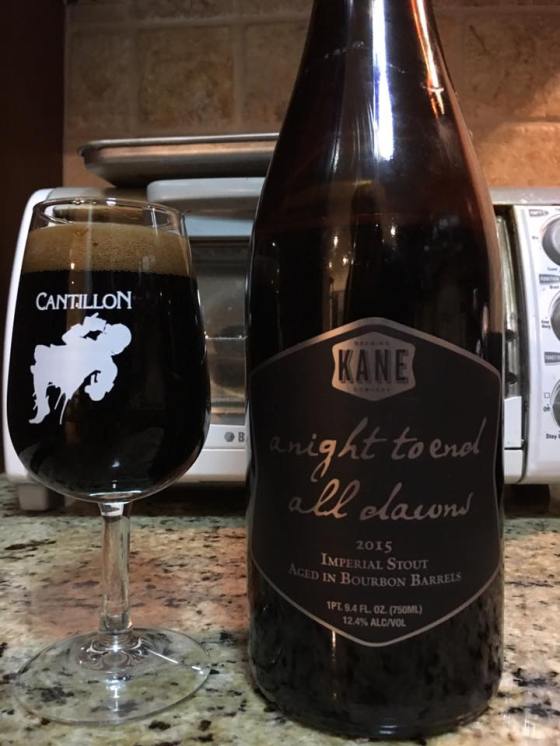 Alright, cocoa nib was outright the shittiest variant.  Let’s get that out of the way.  If you are the type who has been clamouring for Southern Tier to weaponize their MOKAH backburner series, welp here you go.  This is a session version of the unapproachably cloying Chocolate Rain, which is to say it is still exceedingly sweet, as is to be expected.  If you finish an entire bottle of this residual Hershey’s bomb, expect fudgey fissures to pump up GERD of not insubstantial crude.  If mama lets you lick the bowl, then by all means lap it up to your heart’s content.  This simply is one dimensional and without redeeming factors when there are so many other stouts that execute without the sake of drinkability.  Perhaps borborygmus is the penance for indulgence beyond the scope of what is intended.  I don’t need to delve into some ontogenetic study as to why these nib beers continue to propagate, they simply have this waxiness that feels like a lack of attenuation, which given how precisely crafted the base beer is, makes no fucking sense. 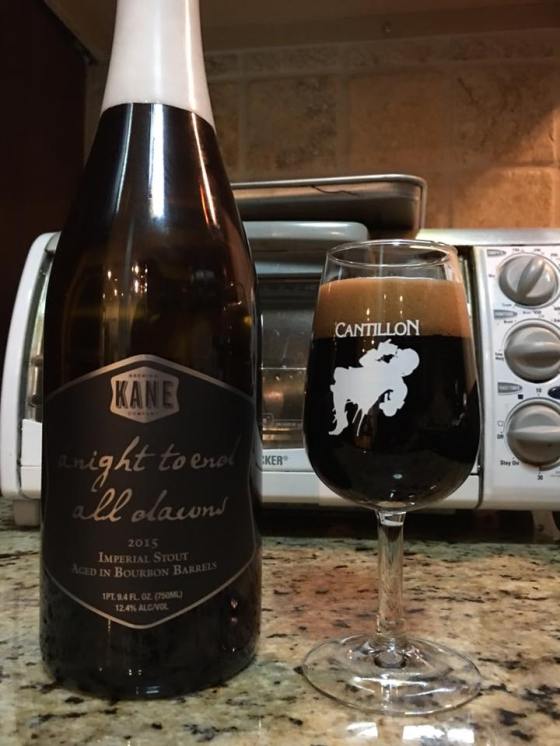 Next worst deviant: vanilla.  Oh shit here we go I can already here those candle mouthed waffle cone lovers wedging their sweaty frames out of Coldstone creamery decrying the virtues of what is essentially a massively one dimensional, albeit completely on the nose iteration of vanilla.  If the function of DDB is ekphrasis, then nothing pains me more than to try and frame another vanilla additive expedition within the constructs of “stout quality.”  The function of most vanilla stouts is to effectively mask the base beer in a way that Citra and Mosaic hops took the heavy handed DIPA producers by storm in 2011.  It is a panacea of excess and doing it well requires that deft gentle palm from Snowed In, show the barrel, don’t drizzle it in confectionary notes.

That being said, this is still really fucking tasty if viewed in the limited craquelure of a genre that is showing its years.  If you haven’t had a zillion iterations of birthday cake stout, this will be novel and rad.  But in the world of inaccessible, expensive, world class bean offerings, this is in the solid middle of the top tier pack.  Let’s call it “Velvet Speedway” tier and move on. 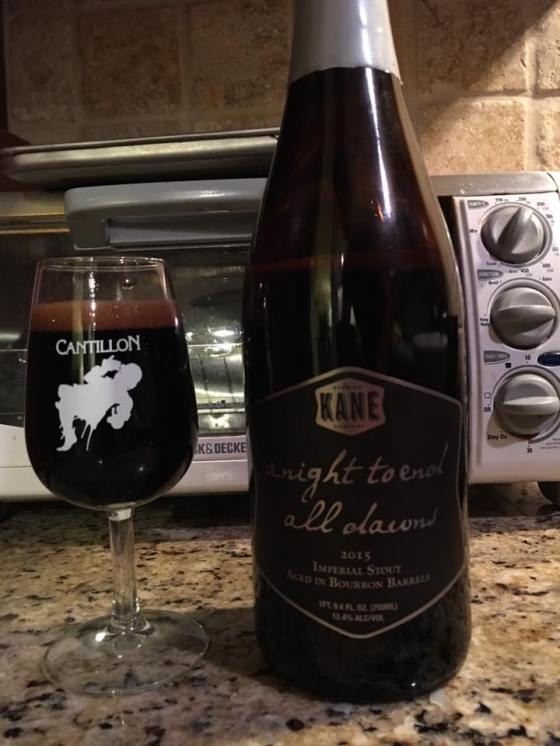 This was my third favorite deviant but, the problems are not one of execution, but of conception.  I love coffee beers and the likes of BA Americano and BAVASS shine when there is a nimble depth and complexity in the interplay between roast and bean flicking.  This has labia numbing amounts of bean grinding that even the most well made Hitachi cannot withstand.  It is still a very very solid beer, perhaps a touch below the likes of Kane’s own masterpiece, BA Morning Bell.  The issue lies within the inherent quality of the base beer.  As a result the “advanced” version feels like muddled prog rock 7/8ths coffee roast solos above all nuance.  Fucking things up tho. 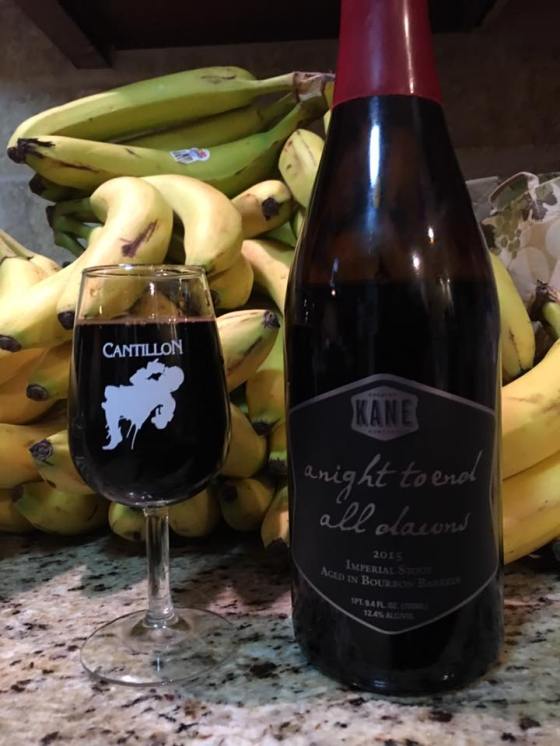 Double Barrel A Night to End All Dawns: how can a 200 bottle, /cringe $400 secondary valuation ever hope to live up to such a mantle? It is almost unfair to saddle any steed with that ornate dressage and expect it to perform nimbly.  I can say this: this is amongst the most complex stouts I have ever had.  It has layers upon layers of sweet but tempered creaminess like Mille-Feuille, brownie and custard, roast and char, a scimitar dance of light fusel coupled with a covalent bond of toasted barrel. 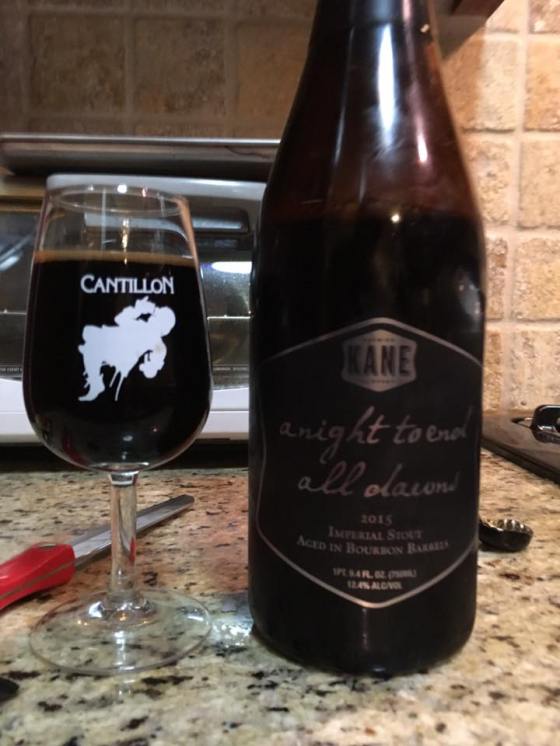 If I am being completely candid, of the bottles that I opened, I preferred the regular ass base beer over all others.  It exhibits a clarity and depth that is a testament to all of the inferior iterations.  It feels as though Kane is such an accomplished operation with precise barrel massaging, and these adjuncts are the “radio hits” the softened gems to allow everyone to feel relevant.  For the people entering the game, having variants riffs are a safe one dimensional rock climbing hold at 15′ elevation.  They feel like they are really doing it, look at them go.

This base beer almost feels slighted by copious handfuls of coffee or vanilla or nibs because the base is so well done.  It has a delicious baker’s chocolate, 85% dark cacao, nestle chips, caramellow and a long oaky toast that feels blunted when extraneous dessert spoilers are tacked onto what is already a commensurate performer.  You simply do not need these other deviations, unless you simply feel like being deviant and showy within itself. 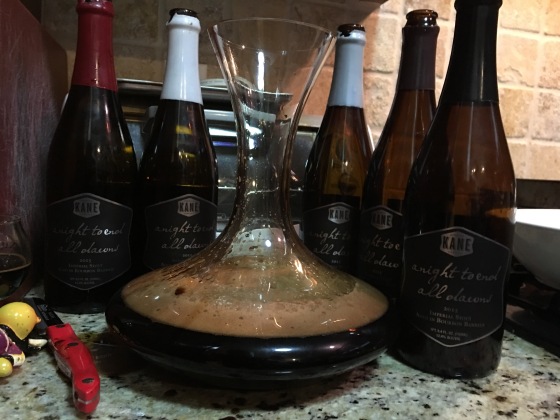 In the end, my absolute favorite iteration of this phenomenal base beer was unquestionably the blend of all components, in equal measure.  This may appear to be some gauche demonstration or fall of rome decadence to typify “control” or “detachment” from value.  Sure, it can be that, but it was also a noble experiment to unify the profiles of the various iterations into something more meaningful.  A composition fallacy brought to life that proved the postulate despite the flawed premises.

Man it feels benthic to topple the most touted variant and promote the base. It feels like straight pandering or statue-toppling for attention. I hate when shit shakes out in that fashion because I have to field bullshit conspiracy theories from innumerable landlocked tasting groups who are inure with the concept that someone could disagree with them on value appraisal.

Just get the base beer if you are strapped for diaper money, but each one of these beers is certainly worth your attention.  Don’t let the curmudgeonous iris of DDB pull in to tightly to force outright stars out of frame. Most of this rhetoric is Fritz Lang forced perspective to draw focus to particular detail, nothing more.

inb4 “That’s why I JUST DRINK PEAEREABLOLA!!! SEE I TOLD U DRINK LOCAL SEE TRADING MAN NOT WORTH IT JSUT SEE PAEARABOLA SEE!!!!”

and all that stupid shit that constantly hangs over my head like the perpetual sword of Damacles.
Edit: DDB may have received a mixed set of vintages to be clarified

3 thoughts on “A Night To End All Dawns: An Adjunct to Unite all Coovies”