It’s no secret that I enjoy Voodoo’s barrel program.  While non-BA offerings like Big Bad Voodoo Daddy leave something to be desired, their barrel program is one of the absolute best in the country.  Even when shit is weird like Jive Turkey or Bourmuda Triangle, it is still the absolute best that THAT beer could have been done.

That’s why when Voodoo wants to take some liberties to do some weird shit I give them a pass because the quality will be there even if the concept is lacking. You end up with shit like the best pumpkin beer of all time: CAUTION!  So like a prime time TV drama Judge: I WILL ALLOW IT.

Well at any rate, we have three completely safe offerings each tactically crafted to make husky beer nerds asthmatic with Stoutphyxiation.  Web MD aint gonna solve these syrupy diagnoses. Let’s get to it: 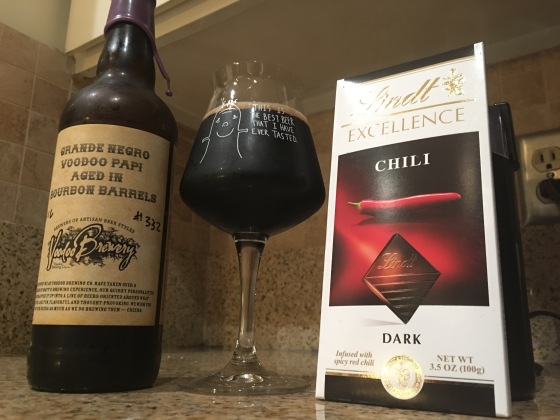 Whenever I see ANOTHER barrel aged Hispanic Stout being turned out of the barrio, I resign myself to a volley of praise from dumbfucks who enjoy reading ingredients on a label and confirming them out loud as they drink the beer.  These beers are for the Guy Fieri beer tasters of the world “OHH MAN i am getting CHILI, theres the coffee, OH MAN there’s the vanilla, WOW I AM TOTALLY PICKING UP THESE NOTES THAT THEY TOLD ME ARE PRESENT.”

The real issue with this style is that the capacity to make a total fucking disaster is a very real horror.  Too much chili, too much vanilla, too much cinnamon, the pitfalls are more prevalent than in E.T. for the Atari 2600. Further damning: I wasn’t a huge fan of the Apple Brandy Version of this beer.  It was a chili fever dream that left my areolas aching.

The good news, this hits the perfect Aristotelian mean and is easily top three in this this genre.  If Apple Brandy Huna is GOAT and &+/Red Wine Mexican Cake has the silver, this is a respectable bronze that excels in moderation.  The mouthfeel isn’t a swampy mess of coffee and residual sugar.  Shit is dialed in, but not so much as to submarine the vessel upon which the adjuncts are sailing. The chili is far more restrained than in the apple brandy version and allows the magnificent barrel character to shine them staves.  I was able to easily drill this and the Lindt chocolate took shit to ridiculous levels.  Fall of Rome decadence, vanilla Vandals, chili Gauls, Franks ravaging my liver in tandem.

It lacks in integrating all of the aspects in the way that the Florida contingency does, but it is still god tier for the genre.  Really exceeded my expectations and helped to shape my anger at the less deficient items in this style. 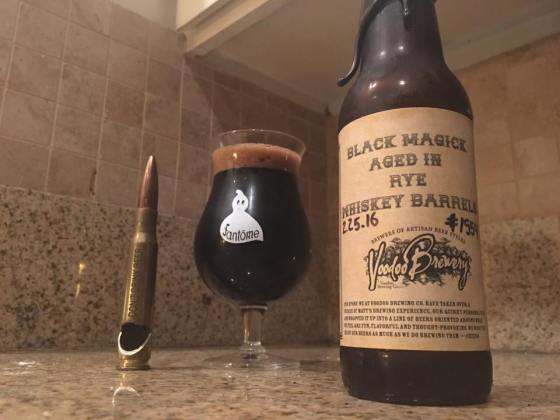 This beer however, was a throbbing disappointment across the board.  Let me temper that statement with some foundation first. Pappy Black Magick is top 5, perhaps top 3 BA stout of all time. You simply cannot enter with that pedigree in mind.  This falls closer to the lackluster Buffalo Trace variant.  Still pretty legit, but you could also have Pugachev’s Cobra for far less and save them Fedexxx bucks.

So where did this fail to live up to expectations? The coating was almost too substantial and seemed excessively sticky, or it might be that the cling was more noticeable because the rye profile is SPICY as fuck.  This isn’t that gentle Michter’s 10 rye holding your hand at the bakery, this is that jet fuel 2 year Willett pushing your own boxers into your mouth and posting it on xHamster.  The oak is a massive bomb and almost makes the spice and fusel notes center stage.  On the backend is a sort of baker’s chocolate waving goodbye in the rear window of a stationwagon.  That stout you used to love leaving the station. It doubly sucks because after three years, I was so ready to have a huge BM. Wait, that doesn’t sound right.

The crackle along the gumline burns in a spearmint and bitter oaky sweetness that clashes with the roast.  It is just too much and the swallow is this oddly briney pickle salinity akin to overoaking (Rare15 getting its Vlasic on.)  I am probably being a 1%er complaining asshole, try it for yourself. 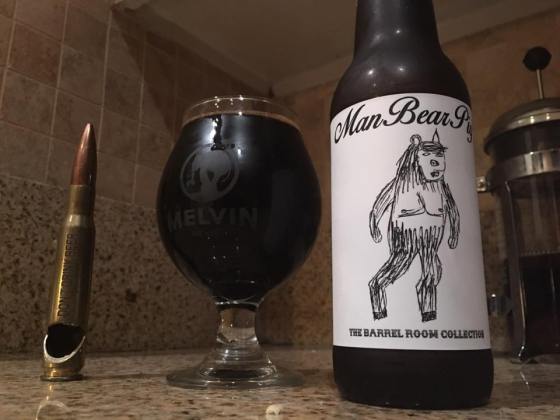 But guess what, none of that matters because: THIS BEER FUCKING SLAYS ON EVERY LEVEL.  Traders have been going apeshit over this like it is the third coming of KBBS, and in the words of Gucci Mane: BITCH IT MIGHT BE.

So what’s the deal?  Let’s copy the description so Jason Yester can spin webs of precum calling me a COPY PASTER or whatever he finds to be a novel insult:
Curt came up with this crazy idea over 5 years ago and now, 3 years in the making, is finally ready for your enjoyment. He first started by seeking out the finest local honey and maple syrup and aged it in freshly emptied bourbon barrels for over a year. Then he brewed the biggest beer we’ve ever made, a robust imperial stout with house applewood and hickory smoked Munich malt, and aged it in the barrels that previously held bourbon, maple syrup and honey. The result is a truly complex work of liquid art designed to be savored.

This is every bit deserving of the praise it has been receiving because, as ambitious as it is, it is a phenomenal BA stout FIRST and uses the maple/honey/roast to round out the cast.  This isn’t some confusing ensemble stout like MAGNOLIA, the core leather and tobacco is coupled beautifully with sticky belgian waffle sweetness and a caramel brownie finish.

And with that, I have fucked myself over because the hype train is leaving the station and I wont be able to hit this component blend of Man/Bear/Pig.
YOU CAN TASTE THE PIG SO MUCH OMG.

Absolutely do not skip this one, there is no clear analog or cheaper alternative at this time. MBP RYDE OR DIE.