I will tell you right from the start, this isn’t going to be a megawrite up that is replete with yukyuks.  For that you can blame Jackie O’s for making beer that doesn’t taste like it was fermented with compost from nursing homes.  People just don’t like reading some waves of praise being lauded on a brewer for doing their fucking job or improving beer culture in a meaningful way.  You can go to Beerpulse or PintsNpanels or whatever for that.  I will try my best today to complain and remain the curmudgeonous fuck in the face of overwhelmingly delicious product.

Let’s get these Ohio tracks over with, I am ready to get chopped and screwed:

Before I talk about this ridiculous sniper of a barleywine, I want to talk about the camping techniques employed by Ohio fanboys.  They continue to respawn at this brewery, consume all the product, send none of it out, and don’t even make the old Chicagoan try to hype up these beasts.  I remember trying Kopi Dark Apparition and being like “why the hell aren’t more people after these beers?” and then wasting thousands of dollars on fedex to shovel used condoms into this dumpster fire of a website.

Back to this BBBK.  It is phenomenal in almost every category, and I have not seen a single ISO for it in recent memory.  If you love the Skor bar decadence of english toffee, whoppers and nougat, then take those and cut those bricks with a tempered American barleywine profile from the BA treatment.  It is like an odd melange of BA Gratitude meets (non-infected) BCBBW, sweet and deep oaky blast of cut lumber, shop class and werthers originals.  The mouthfeel is delightfully thin in that Central Waters way but it has a touch more girth and frothiness akin to Sucaba in that long oaky sheeting.

I would say that this is their best beer, if they didn’t secretly turn out some other insane beers noted herein. 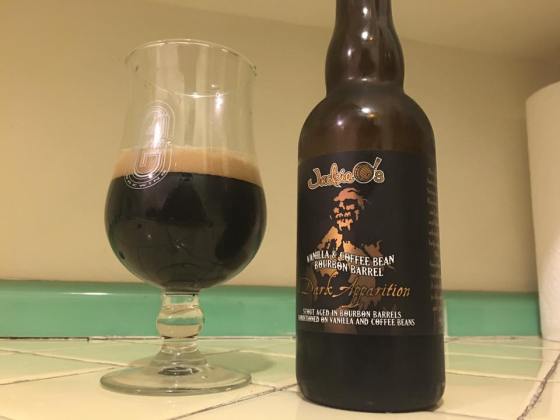 Then they go nuclear and input the coffee vanilla launch codes to send ICBM barrel aged blasts of the most predictable whaley blueprint possible. If you recall, I loved the base beer and that is what stoked my coals to give Jackie O’s another shake since after a foray of disappointing sours in 2012/2013 I let them simmer on the back burner.  What I was unaware of was that they were pulling some baby Kuhnhenn shit covertly behind Great Lakes lines.

Let’s not mince words: this is very good.  I would wager to say that it is within the realm of Velvet and BAVSS, but I don’t want to have the California contingency crack and break off into the Pacific with proxyboy rage.  Oddly, I think that I might enjoy the regular ass base beer more because the vanilla is more one dimensional and over the top.  The base beer was like an insane bean grinding adventure akin to Fury Road.  This seems a touch thinner, lacks that substantial coating on the swallow and the depth distracts from the punchlines in the beans.  It’s still damn good, but I am naturally inclined to make this battle the likes of Fundamental Observation and Vanilla Rye, and perhaps that isn’t the arena to which this beer is suited.

Thankfully you can get this for like half of a single Treehouse can.  So go get it.

My outstanding photography skills notwithstanding: this is the beer that I was just cranking down to supra, except they added nuts. This sounded just as stupid to me as it does to you: but it is god damn delicious, and it might be the best beer that they make.  Not joking or trying to push some nut-based agenda like your Bumble matches.

It takes everything I love about the BBBkiln and the nuts impart this oily sheeting found in the likes of Prop13’s NUTZZZ, that lipid aspect just accentuates the oak but it also gives it a prailines and waffle cone thing that really blurs the English vs. American dichotomy. That tannic almond skin type of swallow lingers anomalously dry for a beer this sticky and I just want more loads of nut in and around my face and cellar.

There were probably something stupid AF like 150 of these made, so that’s cool. Thanks a lot Brad.

So JO also makes IPAs, but calm your tits, this doesnt even have deflocculation or flour added.  Trub levels dont even touch their Ohioan chicken broth purveying cousins, Hoof Hearted.  As a result there’s this inexplicable west coast gem land locked with a massive mango meets shallots, lightly conifer while remaining tropical and zesty.  This was much better than I expected and if you enjoy the likes of Chill Wave, you will like this, one of those geographically misguided beers that maintains awesome mouthfeel, never becomes cloying, and has sheets of aserose on the swallow.

I bet they have this in Athens movie theaters and people don’t even give a shit. People ordering 6 layer Fat Heads sandwiches and focusing on chili dynamics and overlooking these solid stablehorses.  Typical Ohio shit.

I drank the DA backstage before a sketch comedy show so I couldn’t take a photo, but suffice it to say, it is meh as fuck in light of its subsequent progeny.  It is by no means a BAD beer, in the way that you shrug your shoulders and accept a pour of regular ass Darkness at a tasting.  It won’t compel the blunt palates from the 2015 cicerone class, but it also lacks that depth and nuanced roast that some old school dude who has his BJs certified looks for in non-BA stouts.  It isn’t the Batman vs. Superman of the stout world, but let’s just say that Dark Apparition’s mother’s name is also Martha.

Fortunately, JO makes a serious of munition that work in tandem with one another to make some devastating barrel aged carpet bombs.  Cellar Cuvee 1 is a blend of BA Dark Apparition and Wood Ya Honey.  The latter I remember being a sweet mess, but that James O Incandenza apparition taught that Wood Ya how to operate within the lines of component blended tennis. This is one of those odd beers that, in stretching your palate two directions in a DP scene, is oddly fulfilling.  Think Reforged or Firestone 16. It’s a strong ale? It’s BA old ale? The end result is this weird kinda Umbrella Corp. version of BB4d that will kick some ass but be virally unstable in the end.

I enjoy the stickiness that is ratcheted back by the stout roast, it is adept at many trades but you wont take it on high level raids because it doesn’t have a specialization for god tier Barleywine equips. It lacks the chocolate DPS of a BA stout, it’s this weird hybrid that is good and doesn’t rattle your cage with some one dimensional blast from its maple syrupy chest jewel.

I reviewed this first out of the box because I expected it to be complete shit and I could pad out my 1500 word review by strawmanning some Imperial Amber Ale.  I went in with my knuckles wrapped ready to ground and pound some fucked up version of nugget nectar and when that Old Ale Octagon door closed this mixed media Adam from the Wood type of combatant entered.  Amber ale this cannot be, it throws deep malty body blows with a long american oak finish, the booziness was a touch distracting for the nimble body, but the whole thing was tolerable because it moves swiftly and never drills one barrel set.

Right when you think you have the residual hop meets oak thing down, it changes its skillset when at low health to this strangely copper/ultra aged rye, and to the last moments it feels like a barrel aged version of Bell’s Old Ale while you are wrestling it to the mat.  The shit was a ride but I loved it. Woodsmash again 4 shure.

So, while everyone else is pulling their scrotum skin assembling verts, offloading Props, investigating Abnormal brewing, and bitching about what Dark Lord session they are in: Jackie O’s is silently amassing arms to charge northward to unseat those Kuhnhenn icelords north of the wall.  Their strong ale game is getting better and better, and I begin to seriously doubt the veracity of these alcolyzer reports on the labels.

Get some of these before Florida finds out about them and ruins it for everyone.