Man I am reticent to even dip my toe into the Saint Archer/Golden Road/Breckenridge/whoeverthefuck tide these days.  If someone is acquired they attain immediate pariah status and fielding bullshit some mid-level beer nerds is taxing on the soul. Even worse, BCBCS and BCBBW are infected so we will never heard the end of the torrents of septicdeuce coming from the mouths of entry level to mid-range cicerones.

At any rate, Saint Archer has come back for another round and this time they are walking into the chalk circle of some serious shit: component blended barrel aged ales. 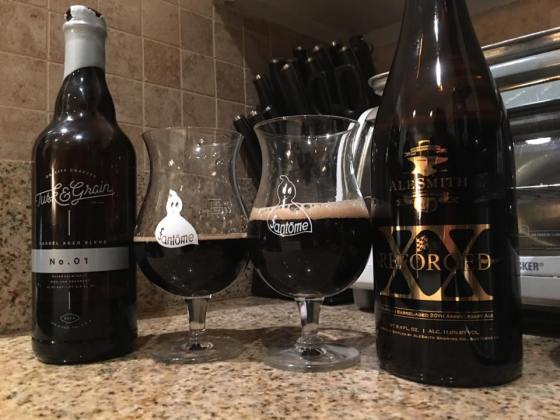 So why not do a faceoff with ANOTHER SD BREWERY, that has not (yet) been acquired. Tusk and Grain no. 1 on paper looks identical to Reforged in many ways. Both have barrel aged stouts and barrel aged barleywines blended together for max damage. Sure Tusk and Grain doesn’t have a Wee Heavy blended in, but considering most beer experts completely neglected how good Alesmith BA Wee Heavy is, they dont deserve it anyway.

The pour is deep mahogany bordering on outright black with light ecru head that has moderate cling but low retention, like that middle child that you didnt breastfeed. Appearance wise, I like Reforged more, but honestly look above, who gives a shit.

The nose on the TG1 is actually pretty phenomenal and the blending of the barleywine and stout give it this sweet meets roasty execution akin to a massive BA Baltic Porter.  There’s a touch of anise and black licorice, sticky tobacco, good and plenties dipped in caramel, and a clean woody finish. The reforged is less stout in composition and leans more towards a straight up barleywine/american BW profile with oak and lacquer, sticky creme brulee shell, sugar daddies and SKOR bar. I like the TG1 nose better, something about it. 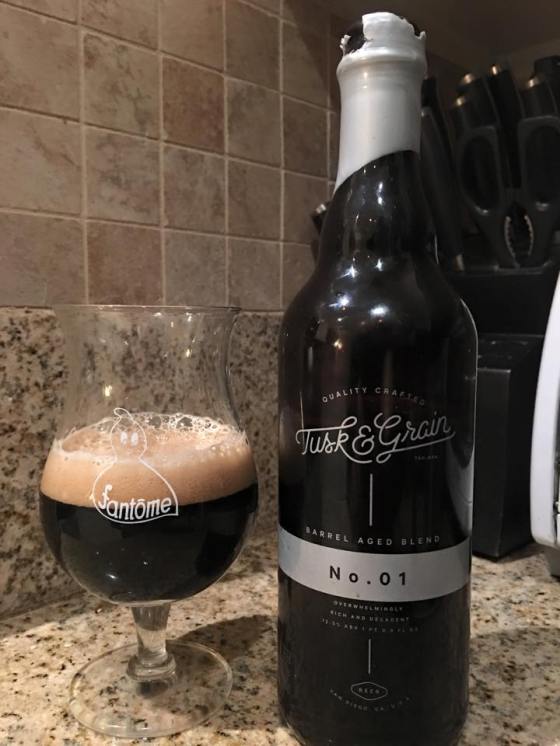 The taste on the tusk and grain leans decidedly towards a thinner stout with euopean sweet elements akin to like Barrel Aged Blackout, Czar Jack, CW16/17 and doesn’t lead with the barleywine aspects, which is kinda a shame.  There’s a roastiness that isn’t quite imperial stout or barleywine, like when you slightly burn a toaster strudel and get that awesome pastry char. The mouthfeel is the most disappointing aspect to this beer in that it simply is too clean and doesn’t have enough residual hang to the swallow.  As a result you drink it faster to chain combo that DRILL CLAW, because anyone who plays as Iron Man is cheap as fuck.

Marvel vs. Capcom jokes aside, this was surprisingly good and kinda ruined all the yukyuks i had planned predicated upon SELLOUTS SEE THIS IS WHAT IS HAPEN. When a brewery made a decidedly competent and very tasty beer, where does that leave old DDB? I can’t do my job reviewing shit like this, there’s not enough meat on the old jokebone. Incidentally “jokebone” is what i called my penis up until a hot glue gun accident at age 17.

As a whole, I enjoyed Reforged more simply due to the more barrel forward character and sticky barleywine notes in lieu of stout dominance. However, the two Latter Day Saints I invited in to try these with me enjoyed the TG1 more, so your mileage may vary.

I don’t know if this is for sale yet but it’s pretty fucking tasty, and part of me wonders if this was racked pre-buyout and this is a fluke BA offering.  Time will tell, but in the interim, snag one of these, it’s certainly worth your time. Or just wait until that $60-80 bottle of Rare hits rock bottom in the next few months and trade it for this. No box needed.