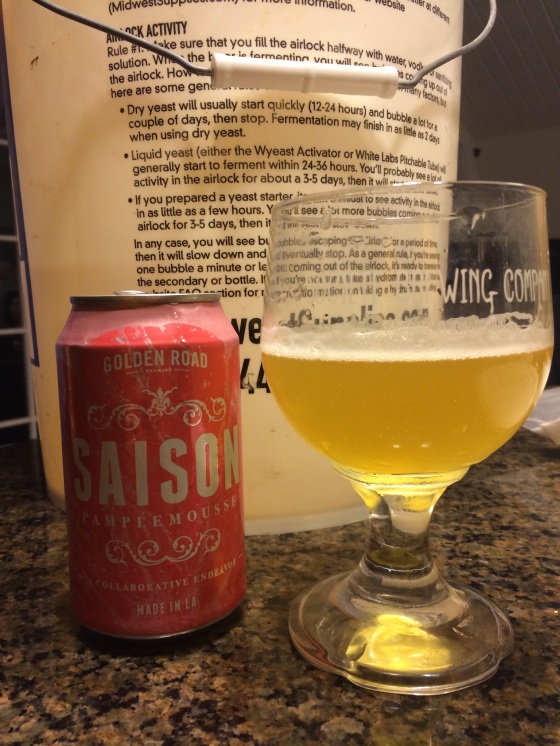 No you aren’t reading that incorrectly, no I didn’t land the saison ghostwale Pamplemousse from fantome, this is a Whole foods exclusive from Golden Road and they are dipping their toe in that farmhouse tide. Since no one except me will give a shit about the branding conflict, this is a perfect time to address big breweries rolling out farmhouse ales recently attempting to do what blue moon did for Belgian wits back in the early 2000s.

The can is pink, the aggressive marketing is decidedly fruit forward and underscores the adjunct presence throughout. So far we have a pasteurized saison, in a can, with fruit added. The pour is admittedly beautiful with cascading foam and unendingly cling, a radiant srm like radioactive straw and lasting carb that holds on.

The nose is binary in that it presents a huge waft of grapefruit pith, both sour and bitter but allows a cracked black pepper and estery presence through on the back end. I get a slight cloying yeasty presence that seems like DMS or wet crackers, lightly vegetal as it warms.

The taste is just….fine. I don’t say that to be whimsical or intentionally deprecating but I am sure you already knew how this would turn out. It sits proudly in the lineage of 21st amendment sneak attack and Surly Cynic as a throughly mediocre and acceptable if not forgettable entry into the saison canon. The huge reliance on adjunct citrus and fruit forward nature of the beer renders the saison aspect a complete back seat rider, kept in yeasty submission. It isn’t authentic in execution like a Wallonian offering, nor is it lactic or blurring the AWA lines like many of the recent industrial park ballers in American turning out monoculture bombs, it just is there, you paid for your time, so finish so you both can get to sleep.

The taste is so fruit forward that essentially they could have made a Belgian pale or even used their straight hef and fruited it and most people would neither know or give a fuck. This won’t turn the average trader joes dick rider away from Saisons, but the real problem is it won’t turn them ON to the style either. Since most readily available, large scale offerings in the farmhouse genre are lackluster shit like this or worse, like Hennepin, I constantly have to field comments from beta casuals who read Esquire magazine and think they know some shit.

At the end of the day, it raises some farmhouse awareness and maybe an asshole wearing Rag and Bone will try this at a marketing mixer and buy a bottle of Seizoen Bretta later on, I couldn’t give a fuck less, I will probably be all into Dortmunders at that point being a condescending prick in some other fashion.

The beer is pretty okay. Chances are in wide spread retail offerings you can do far worse. Imagine if you had to drink Red Barn the rest of your days. You can drink this beer on a boat, tongue kids that undergrad, wash escort spit out of your mouth: Belgian people won’t give a shit.

That’s pretty much how I run this website: Drink beer, toss shit, pass out.