Slowly but surely, beta tickers are starting to turn off their Tae Bo tapes and now are discovering saisons. As much as I didn’t want this to happen, like those first tufts of curlies, all those baby 2012 bitches are taking those wobbly farmhouse steps, jingling daddy’s Wallonia keys. I guess this was the logical extension of waiting on kids who were all about Black Note and KBS last year, now they have a litany of ultra-lactic, wild, high abv super saisons at their disposal and suddenly we have a new crop of saison masters.

I wouldn’t have it any other way. Those same weak peninses who thought saisons were all Hennepin and Red Barn suddenly are flexing their traps in the yard, tryna run shit. I am fine with that because I let my Biere De Garde lats swole like bat wings. So what is the deal with all these small run saisons that push the inner butthole of the American Wild Ale game? Cory King is kicking out these 400 bottle runs monthly and now has main bitches and side bitches in his Sidekick. Chase started crushing up lines of Caravienna on a CD case and letting tickers wipe it on they gums now guess who is hooked?

Today I wanna holler at these mountainous farmhouse purveyors up in Oregon. I picture head brewer, Paul Arney, doing burpees and deep dips in a hollow out spruce coolship, cooking up these super saisons turned wild ales, working on his chest piece. So it wasn’t like their “normal” lineup of Sahalie and…uh…La Tache I guess, were easy to come by. Those were already like 700 bottle runs and asspensive. So I moaned initially at the idea of having to seek out their LIMITED shit. The waiting list for their AA club is over a year long and I don’t have that kinda patience. Luckily, the PNW traders are staggeringly charitable and hooked it up.

Today we will be counting down the recent limited Ale Apothecary releases, RANKING THEM, and tossing beats along the way. Because I am not writing no 2700 words with narratives and shit. 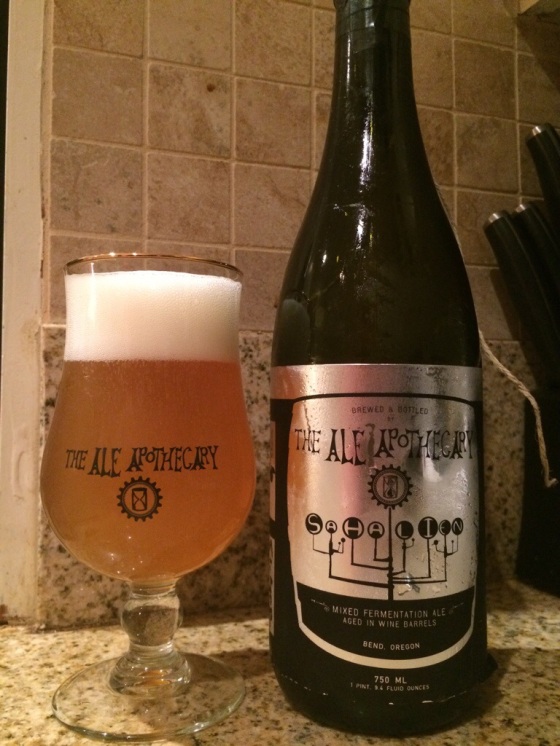 We are not the same, I am a Martian, approach these cellar doors with caution

Why is this a bitch:
270 bottles produced
Ale Club members will receive theirs automatically, leaving “100-150 up for grabs”
No bottles will be available for public retail sales

– Alright first and foremost this is by no means a “bad beer.” Not unlike the Blind BABW tasting results the competition is fierce because we are talking about top tier super saysuns/AWAs. I initially opened this super cold because I had carbonic acid issues with MASSIVE carb and gushing. It’s like AA takes a page from old Logsdon on their attenuation swag. This spill out as lively as Champagne and just sits soapy with a thick domeshot of Palmolive bubbles.

This is strange, but you welcome it lovingly. RIEEEECHARD PARKER farmhouse swagger.

– This beer is just too. fucking. sour. I know some people do naked diamond pushups and call me a pussy but the lactic profile coupled with the low ph, intense dryness, and crackly overcarbing just makes this hard for the 750ml trudge. I mean, I still finished it and really enjoyed it but god damn, it’s like going to Mormon summer camp, just running your mouthraw with that farmhouse heavy petting. This has a tart bouquet of tangerine, light bitterness like orange pith, grapefruit juiciness, and a closer that is bittering like some of the Blaugies offerings. I still killed it, would love to try it again, but this is the least balanced and more extreme of their offerings. Still def. recommended.

Why people lose their shit over this:
SPENCER (The Dispenser of Provisions) is our annual fruit beer. In the early fall, we harvest wild blackcurrant fruit and add it to a batch of year-old SAHALIE. The sugars in the fruit produce another fermentation and the blackcurrant tannins create additional structure over the 8-month aging period. Prior to bottling, the beer is dry-hopped for a month in oak barrels. With close to 2 years in oak, Spencer has a much more developed Brettanomyces character than our other beers.  Because of the extremely limited quantity of wild blackcurrant available, we produce only one oak barrel of Spencer every year. This beer is unlabeled and reserved exclusively for our Ale Club members.

– See all of that above? That reads like a romance novel for the modern beer trader. All those adjectives just create that perineum tingling that people who seek Raries just gotta have. I really enjoyed this beer and loved the riff on the same Ale Apoth offerings. This has even MORE absurd carbonation, on the same level of Sahati where you pour it and just stand back like “alright, enough already.” When this finally settles down it has a radiant golden, quasi turbid precious metal allure to it.

– This beer is less dry than Sahalien and is easily the most drinkable, the abv in all of these beers is laughably imperceptible but this one drinks like a belgian table beer and you could pull some PUNK’D stunts on your bisexual roomate with this sleeping beast. You get apricot, tart kumquat, there is light graininess to it and this would be the closest to the super saisons and less in the AWA realm. If you liked Fantome Extra Sour, you will really dig this beast. Again, highly recommended. Top tier, china white, not stepped on product.

WINRAR: THE BEER FORMERLY KNOWN AS LA TACHE AGED IN RUM BARRELS WITH WHITE PEACHES or “TBFKALTAIRBwWP” for short.

WHY ARE PEOPLE LOSING THEIR SHIT:
First and foremost, I think La Tache got caught up in some petty wine litigation not unlike SUCABA, because now we have this disclaimer version. I can only speculate, but any way. The base beer was fucking awesome, then they RAR’ed it hard in rum barrels, then added the WHALEFRUIT: white peaches. I think this was a 230 bottle release with most of the bottles taken to the Second Annual Portland Wild Ale Festival. I think the AAclub members then got the chance to buy maybe one? If you areolas aren’t tingling then maybe you need to go back to drinking Colette.

This doesnt fit in AWA or Super Saisons, it just stunts hard as fuqqq

– God damn, if this is the Goldlocks paradigm, TBFKALTAIRBwWP just tears it up and is “JUSSSST RIIIITE.” If Sahalien pulled your hair too hard, but Spencer wouldn’t talk dirty to you, this is just the right amount of wrong. The balance is incredible between the juice, acidity, funk, barrel, and laughably hidden abv. The carbonation is the most retrained out of any AA offering thus far, the hue is a perfect deep orange, slightly murky, that orange and pineapple ester profile just banging, peach jolly ranchers falling in but dropping a 2/4 acidic beat, not a sticky sweetness. The nose has a muskiness, light funk that is dominated in equal parts by the acidity and juiciness which wasn’t metabolized by that high ass attenuative yeast strain. This is like if Fou Foune and b1 Persica were all tongue kissing and you are peeping through a painting with the eyes cut out. It’s that decadent and tawdry, but so fulfilling.

– The taste is fucking phenomenal top to bottom and I would be surprised if this isn’t within the realm of DDB top beers of 2014. I really can’t offer many descriptors for improvement aside from a slightly sweet cloying aspect at higher temps, light fusel presence in the low 60’s, and other nit picky shit. But in all honesty, the fruit interplay with the acidic tannic finish and caramel underpinnings of the rum barrel make for a peach jubilee that is both dry but assertive, juicy but gentle, you can take her to your parents but also pull her weave.

This is the real deal, through and through. Cannot recommend highly enough. Now I will never try this shit again because asshole DDB readers always ruin it for me on the ISO;FT boards.