Every single time that I get one of these Olde Hickory bottles I know that it is going to be herculean effort to get them open. Even their normal beers like the imperial stout uses no fewer than 12 coats of wax to seal the bottles. Who are these fervent North Carolina collectors that require this level of sealing? In today’s outing we have foil, a gold seal, and a Pontiff certificate of Authenticity that I had to deal with before I could give this beer the business. Imperial Pilsners are srs bzness. 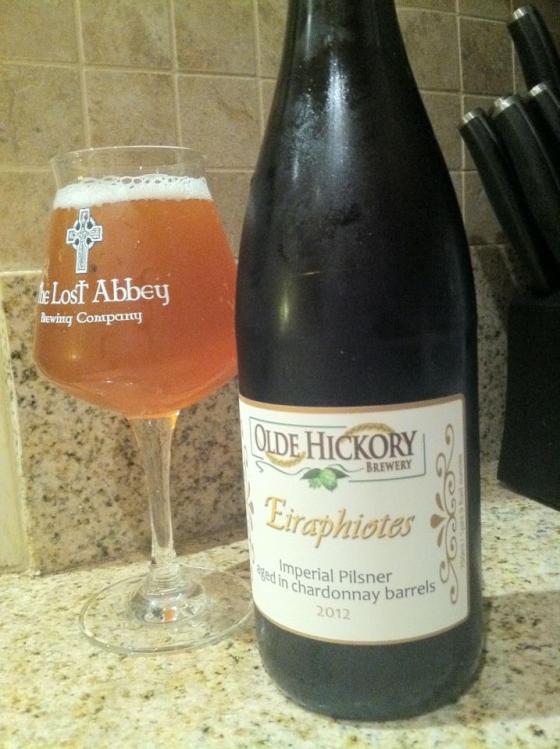 How did I celebrate IPA day? With a chardonnay barrel aged imperial pilsner, of course.

A: The appearance is dull tangerine orange with nice lacing and foamy carbonation. I had some cling but that was due to the fact that I used as dirty a tulip as possible. This is required by my Carolina contingency, so I can only abide. It looks more like a DIPA than a pilsner but, I don’t miss the yellow hues. I think we are better off without one another, like your iPhone and the Grinder app.

This beer is so extreme, even the chardonnay is imperial pilsner

S: Wait, this is a pils- oh ok, CHARDONNAY barrel aged imperial pilsner. Things are making sense now. This is a pilsner in the same way that a Mitsubishi Evo X is a 4 door compact car. Like people who drink chardonnay, this smell dominates the entire conversation and the muted honey and conbread aspects take a backseat while you listen to a dry narrative about how HARD it is to raise kids as a working parent. It isn’t off putting but, your mind wanders.

T: The dryness from the Chardonnay is like a Jehova’s Witness visit to the OBGYN. There’s a nice oakiness and a tart white grape aspect that is draped lovingly over the tableau of light hops, biscuit malt, Bisquik chalkiness, and a a sweet roll finish. It is a strange hybrid but, innovation comes at the stress upon the trapezius of experience.

White wine and powered up pilsners? My face be all like-

M: This is not as dry in the overall aspect as my earlier simile would connote. It is dry, but it is also hoppy and sweet at the same time. This tug of war match is like Wild N’ Krazy Kids, where the adults are seldom triumphant. The winner is the sweet notes as it warms and the consumer is edified as a result.

D: Despite the abv, and dryness, and crazy chimera that is presented, is exceptionally drinkable. I don’t know if the 750ml fancy schmancy bottle lends itself to drinakbility, but I ball hard so it is sessionable for me, the average poor ass consumer without alcohol problems might not agree but to them I say, how did you end up on this site? Did you Google Channing Tatum sex tape? Well here we are.

This beer is a big refreshing blast to the face.

Narrative: the premise is that Dionysus has an evil twin, that doesn’t drink. The two switch roles on a blind date, or something. My liver hurts too much to flesh this one out today, do your own work.