Well I already reviewed Cascade Blueberry and Cantillon Blabaer, where do you go, my lovely? Where do you go? I guess we can round out the fruit beer profile with this lil firecracker. Let’s see if it gets the juices flowing or if it should have remained on the vine in today’s review. 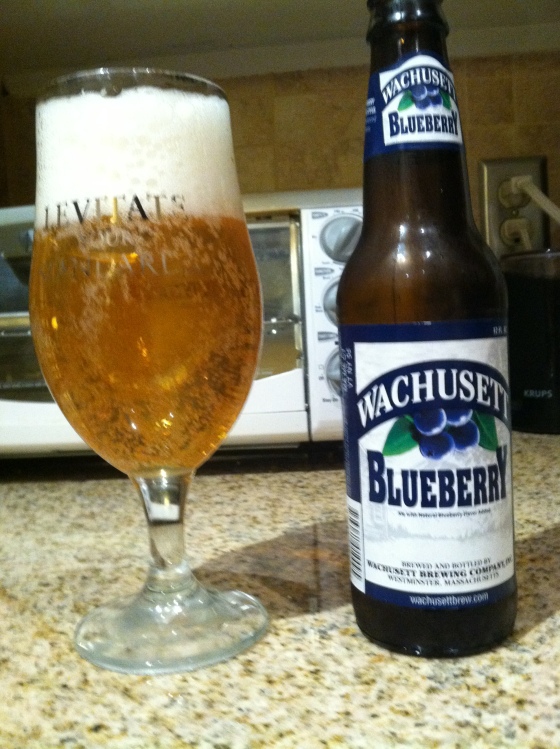 Was this beer the inspiration for Blabaer? Mayb- No. Definitely not.

A: Thin straw color with incredible lager-like clarity. The lacing is nice and the middle carbonation rides throughout. Looks like a very well done, albeit thin, lager. I must admit, seeing absolutely no hints of blueberry tinting makes this highly circumspect of some adjunct or additives, maybe I am just breaking their berries but it is suspicious.

Blueberries are a simple pleasure even 2nd graders can enjoy without a single pang of guilt.

S: This smells like grape soda, or the blue sticks of fruit stripe gum. The blueberries are present and accounted for a in a huge way. There’s a very faint tinny hint to the back, similar to the way Heineken and Beck’s retain that but, its so overwhelmed by fruit notes, it’s tough to really point out.

T: The taste has very little of the fruit that was present in the nose and drinks like a pilsner with great crisp corn at the outset which fades into an ABC bubble gum grape flavor at the end. It isn’t exactly grapes or blueberries, its like I already ate them and now am drinking a beer.

Can’t afford blueberries? Want to get drunk on public transit? I have just the libation for you.

M: It is incredibly crisp and refreshing, it’s easy to take huge pulls off of this glass and it practically begs to be enjoyed outdoors. It’s tough to say a lot here, there’s a mild cracker note to it but you move your mouth slightly and it flees quickly. it’s like that God damn Booberry cereal, good luck finding it outside of the month of October.

D: This would be this beers strongest suit and arguably most redeeming quality. This comes off as an adjunct lager but done “better” than adjuncts I suppose. I had the same problem with the Sam Adams Cherry Bock as I do as this one, there’s this dental artificial flavoring to this that comes off as disingenuous.

Alcohol can say many things. This beer says “hey lagers are for preteens too”

Narrative: “BLUE BERRIES FOR SAL!??! YOU WERE GOING TO REENACT THAT BOOK!?” Mr. Mitchell’s face was beet red. “Well, yeah so we went up past the brush land and yeah I let them run around looking for a bit, searching out some blueberries, what have you.” Chase pleaded, trying to smoothe over this catastrophe. Mr. Mitchell ran his fingers through his hair pacing at the base of the trail. “OH GOD, THEY COULD BE, please, just help me look for them, we will deal with you later.” The two darted left and right, the lowlands of Wyoming were not exceptionally blessed with wild blueberry patches. “Is that- I think that’s them over there!” The two scampered over logs and felled trees towards the clearing. “OH MY G-” There the two children were, their baskets strewn about pell mell, blue berries smashed all over their faces and clothing. “Da…no more blub-…bluberries for Sal…” little Kaitlynn’s voice gurgled through the messy blueberry puree oozing out of her face hole. “GRRROOAARRRR!!!!” the resonant call of a Black Bear resounded through the meadow. “OH GOD YOU REALLY DID REENACT BLUEBERRIES FOR SA-!”

One thought on “Wachusett Blueberry Ale, This Beer is Straight Up Stomping My Berries”