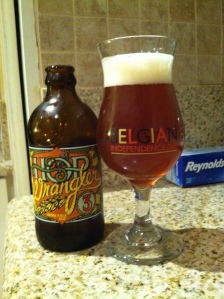 Hop Wrangler, figures I would have to go to Iowa to get my hops all wrangled

Alright, so let’s continue bothering the midwest and now Iowa is on the chopping block. I have actually been to this state so I can safely say that this state simply makes amazing beer because they, need it the most. This one is no exception.

I didnt even know that town existed, I wonder if it’s a badass southern/midwest hybrid, no? Oh ok, I have just been informed that it is a boring ass town. Ok. Carry on then.

A: This initially poured a bit too malty and I was all shaking my head disapprovingly like someone in a mentos commerical. It’s all deep and golden and its makes me like “I bought a lipring in the mall at Coralville, you crazy IPA!” and he gets away with some shit. The lacing is awesome, nice stickiness. Just like all the beer on the floor after my first night in Iowa City when I saw a for reals fight, over what Heidegger would call “Being and Nothingness.”

S: This is amazing, it gets all juicy with grapefruit and apricot and for a minute I was taken aback like, wait wait, what’s this beer up to? But, just like when your parents told you that Selma was Midevil times…

This just isn't fun to put down, then hug need.

T: God damn it. Iowa just pulls a full on hop tease. The taste is so stemmy, it just gets vegetal so hard. It tastes like stems and seeds, ooh wee. Appropriately, the beer on the bottle says “In Heaven There is no Beer” and this theological assault seems to be making up for lost time. Another thing that pisses me off about this beer is that it declares step by step what goes into making an IPA and seeks to get some latent praise from it, it’s like:

“We used a full boil and hops in the initial stage, then we added additional hops, then we used a different type of hops and then in the finishing we used another type of english hops”

Like no shit? Dry hopping and adding to the boil, wait hold on, let me stop the presses like Catch Me If you Can. They apparently use a belgian yeast which adds banana, esters, and clove which belong in this beer like an jock belongs at a Babylon Five convention.

M: This has a great crisp mouthfeel that is all welcome and cool, until it opens its mouth and gets all herbal and foreign. It was good until I actually tasted it, stupid Iowa, your bars are so amazing, and then this.

D: This is hardly drinkable because it has a low abv, relative to the style, it’s boring, ugly, and gets worse when it hits your lips, insert latent joke about Iowa. No but seriously, there’s ways to pull this off, and I like the variety but, they had to know that this just didn’t work on paper, not even a 5 gallon test batch? I guess I just dont like the belgian IPA style but…OH WAIT LOOK AT MY ALE ASYLUM REVIEW where they did this style fucking amazingly.

Narrative: “Guess what? No love to my homies until people from Iowa get into the chill zone on their beer laws. Not enough chillaxing taking place when importers want to move units all up inside that rectagonal state. Just trying to push sick weight into agrarian districts brothenol, ecoboost with ecobrews bro. Don’t be haters because we want to get a sick fade and hit up Herbert Hoover’s old hood. Alright, I wont mess with any corn or try and muscle you out on the hot-girl export racket, but seriously Ioweezy, just let some other states hit you with some sick cases, drop mad bombers on you. It’s not like keeping high ABV beers out of your state will stop people from drinking, it’s like Prohibition era Savoy Ballroom all up in that bitch, non-stop. Anyway, the COs are stressing me about writing this long ass open ended letter to the population of Iowa, but ball all I day is what I do, once I get out from this 5 to 10, I am hitting up Iowa and copping some St. Ides. Real Spit”

– T Cell was shanked in Boise Correctional Facility before his utopian ideal of an alcoholic Iowa could be made into a reality.