Enter VSB, an american wild ale with a story to tell, berries to flex, and a proud lineage rolling deep like an MC Hammer entourage. At a staggering $8 a bottle and 3 per person staggered over 3 days, you would figure this should trade for what, Double Huna? Flora? GUESS AGAIN AND GIVE ME YOUR CCK MOTHERFUCKER. The trade threads for this went to hell in a handbasket real quickly and honestly, if Secretpizza didn’t send this ratchet bitch to me for free, I don’t think I would have bothered throwing my hat in the ring. Whenever you see an Illinois dipshit posting things like “I only have 3 left but, I don’t think I would ever trade it, it is that good, unless something really good came along” you know shit just got real.

So thanks to Secretpizza for keeping my butthole intact and allowing me to get my berries juiced in today’s review. 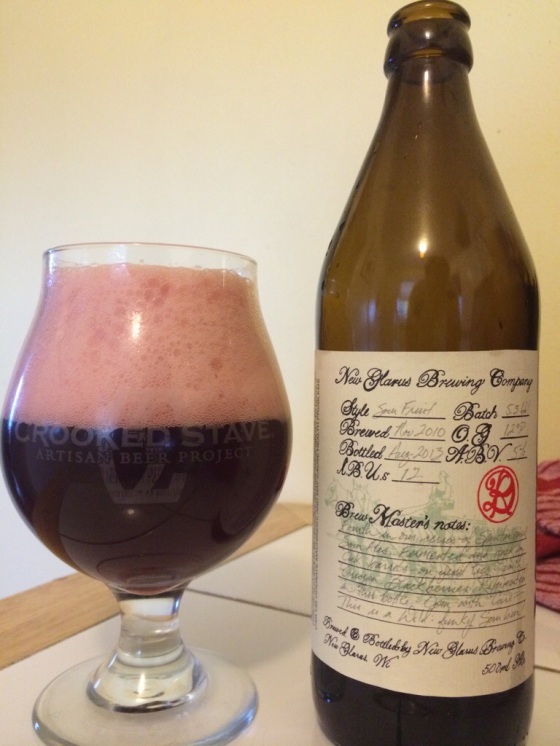 Pour this bottle and it looks like the inside of a Claire’s or a Wet Seal.

Notes/Commercial Description:
Fourth in our series of spontaneous sour ales. Fermented and aged in oak barrels – on yeast lees – with Oregon blackberries. Refermented in this bottle. Open with care – This is a funky wild sour beer! There is also a bunch of illegible shit on the label I welcome you to try and read.

A: Just look at this fuchsia madness taking place above, it looks like a tween’s bedroom and only needs some chartreuse inflatable furniture to hit full on third grade sleepover status. The carb ranges from hilarious to excessive and doesn’t even burn off as exceedingly quickly as you would anticipate. The hue looks like St. Lam’s viscous cousin, deep thick grape Otterpop, that velvet violet merging with purpiest of purps. It is admittedly a very pretty beer and looks great sprayed on the hood of a Bugatti. Ball the fuck out already.

S: This presents more of a jammy countenance that the previous R&D endeavors would have led me to believe. There is a smuckers grape jelly, blackberry tannins, no cloying artifical sweetness and you get the crushed fields and farmer’s market kisses at the outset. Another interesting thing is, for all this VERY SOUR CUP YOUR BALLS talk on the label, it doesn’t smell intensely sour. It exhibits an incredible balance in form an execution, terroir from the berries, but a substantial complexity from the sharp shocktart back end. Can’t even front, it smells phenomenal.

T: This leads with a sharp acidity that immediately is pushed aside to convey a deep berry character, purple gushers, blackberry preserves, razzleberry pie, and this light dryness on the finish. This beer isn’t overly sour, it isn’t overly sweet, it isn’t intensely acidic, and it doesn’t go for an artificial heavy handed approach with adjuncts: IT JUST DOES EVERYTHING RIGHT. This is essentially a deep purple M3, a product that is so well balanced and highly revered that the biggest dipshits in the world covet them and it ruins the experience for you. I am fairly confident that this beer is not yet a staple in Persian bottle service culture, but soon.

If you decide to trade for this, be cautious: this pretty little beer can be a total asshole

M: This is not your daddy’s intensely drying Upland Lambic, it isn’t your momma’s one dimensional lactic Cascade, it lacks the sticky sweetness of the other cloying New Glarus fruit beers: it goes in hard. It provides tartness with a sticky resonance that steps in graceful time in a berry 3/4 scherzo. Usually I would toss my hater hat in the ring and pipe up with some shit like “BUT YOU CAN JUST GET St. LAMVINUS FOR LESS” but I don’t even know if that is accurate. This is distinctively American and seems to supercede the fruited lambic offerings that would be analogous. American Wild Ales are a genre born on derivative inspiration and this is the clearest example, second to Cable Car Kriek, of an AWA that is a genre defining beer. Place this next to batch 1 Persica 750ml and a short list of exceptional American sours. This that shit you need to learn though, that VSB, shit that makes your cellar burn slow.

D: This is intensely drinkable and the impossibility of obtaining one of these makes this entire appraisal laughable. I could drink several of these linked together like a chain wallet on some purple JNCO jeans. You could serve this to anyone, your lady friend who uses “supes” and “gorg” nonironically, or a confused young minor seeking your help. Everyone will get their mouth on this purple throbber. Wipe the juice from your chin and seek this out if you feel like it, but realistically, just drink Almanac Blackberry sour, it is verrrrry close, but not quite as good. Think like 09 BCBS Bomber to Rare levels of comparability. All in all, an otherworldly beer of staggering quality in almost every way. 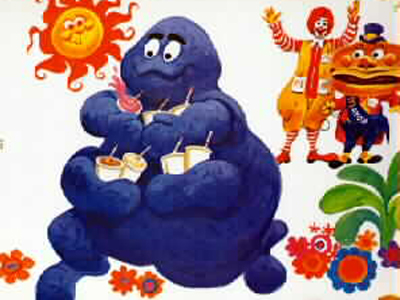 Midwest coveting, ruining things for the rest of McDonaldland

Narrative: Grimace was misunderstood in Mcdonaldland from his very origin. He first appeared and swung his berry endomorphic frame, gripping the milkshakes of others, being a covetous monster. It was not his blackberry breath or his radiant violet hues, it was his offputting nature and unendingly sweet nature. It wasn’t his fault that he was overweight, he spawned that way in a land that no one wished for. A landlocked zone of purple obesity and hate could hardly beget the nicest of creatures, but Grimace rose above. Grimace had an unnamed mom, an unnamed dad, a grandma named “Winky”, a great-great grandma named Jenny Grimace, and might have had a brother named “King John Bailey”, who was the king of all Grimaces: BUT NO ONE GAVE A SINGLE FUCK. In the muck and mire of mediocrity and imitation, Grimace transcended the monster genre and became something sweet and sour at the same time. He was a gentle creature capable of deep destruction, but checked his privilege at the door and bumbled around lovingly. “YOU KNOCKED OVER MY ARCH DELUXE YOU FAT FUCK-” one patron would exclaim, but deep in this sticky sour heart, Grimace knew that he was worth more than those that surrounded him.