You know when Three Floyd’s puts something in a barrel you are in for either an amazing treat, or something you hype up to your friends to convince yourself that giving up a Chocolate Rain was worth it. Don’t worry FFF, you guys nailed it with this one and I loved this bourbon club banger. Some people might not be able to roll with this and they clutch their King Henry’s and enjoy all their stout notes in their barleywines but forget all that, let’s sip some Owde Engwish 800 in today’s review. 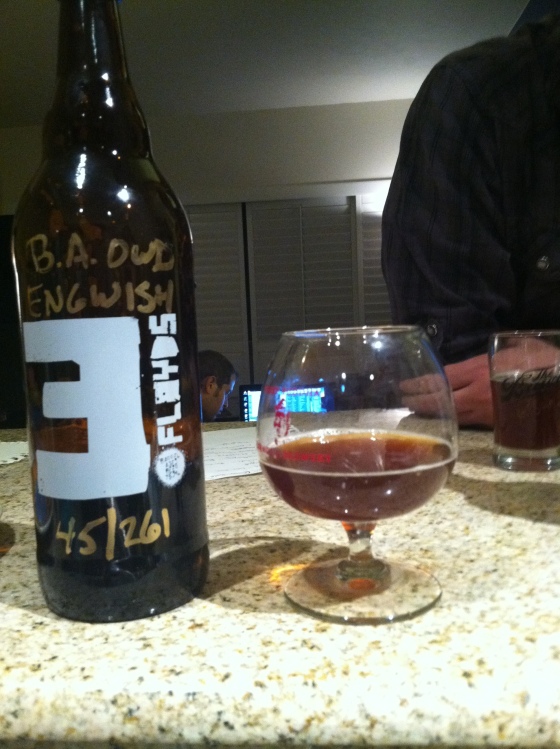 You know you are heading into the winzip territory when the brewery straight up didn’t even make a label for the bottle you are drinking.

A: This has a nice turbid shine to it like a liquefied caramello with some Werther’s original gloss on the surface. The outside is candy and it smell sweet, AR-15 is on the passenger seat. The carbonation leaves something to be desired but, Megan Fox has weird toe thumbs, you gotta let some things slide.

This is an advanced beer, if your friends are still in the hophead stage, have them look this beer up on their Internet Explorer browser page computer seeing device.

S: The smell is amazing and presents itself like a surly toy class breed with charred brown sugar, fuji apple, vanilla, bourbon, hot hot heat, toasted marshmallow, and some sticky sweet caramel rounds out the experience. If you’ve ever kissed a 7th grader with braces, you’ll know what I am talking about. If you did that recently, maybe you are on the wrong website.

T: The taste brings the heater in the two seater and lights up the bitter and the sweet zones. The amps all go to 11. You get a hot bourbon aspect that I thoroughly enjoyed, you also get some bonus vanilla, creme brulee, oak, and candy apples. Girls debate how many bathing suits to bring to Vegas, guys debate how many bottles of BA Barleywine is enough. Neither question is ever answered adequately.

This is a big beer, but it is surprisingly gentle and caring.

M: The mouthfeel is incredibly dry and scorching in a fully entertaining way. It’s like going to an All That Remains show where it is over the top metal with scorching hot licks that you can’t get enough of. For those unacquainted with this style it is like when Sega Genesis came out it was like seeing fucking burst processing for the first time. I got my bursts processed so hard. This is hot and dry, like euphemism simile quip punchline.

D: This is a tough beast to wrangle but I, in the minority opinion, would really enjoy taking a bomber of this to myself. Most people will get barleywine toxic shock syndrome and complain that it is too big, too confrontational, but fuck all that, what were you expecting with a Three Floyd’s Barrel Aged Barleywine? This isn’t some Ryan Seacrest jaunt in the park, this is a malt balls to the wall massacre. You can either love it or leave it. I LOVE GETTING MY MALT CUBES STEPPED ON.

I am trying to drink several beers in a night and this rude ass barleywine just gets me all drunk. Inconsiderate ass beer.

Narrative: Sophia Jergens was a solid clutch shooter for the women’s water polo team. Some argued that it was her gangly appendages, her lanky fingers, or her outturned hips that allowed her to tread water; regardless, she came through when her team needed it. The locker room sessions were overly awkward. She had a slight hunch to her shoulders, and the rest of the team was markedly beautiful. “Ayn den I was shooitin de bawl aye was!” she drolled in her cockney accent that irritated coach and fan alike. She was a brash, uncouth, rough individual in a league of panache and finesse. “Oye me legs be gold panning the wayter like whales’ baleen it is! Ain’t trimmed the kudzu back in many a score!” she attempted to pun with her disgusting stubbly legs. Sure, she was a bit too offputting for her team, but she came through in the clutch, where it mattered.