Damn son, has it come to this? Fucking around with that 2% piece like a baller ass Derringer with one up in the chamber. So this one last came out 4 years ago in a massive 150 bottle release. Most people stroking it to King Henry or having nocturnal emissions about CBS don’t even know what the fuck this bottle is. This site isn’t for them. For those of you who actually appreciate this 2% choad, you will how know deep this satisfies due to the girth. Let’s give the fucking 2012ers a second to Google this and become Berliner experts for a moment. 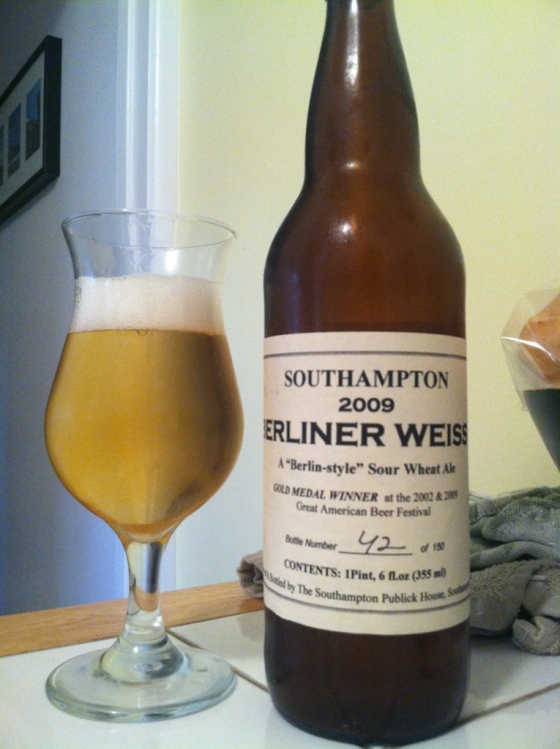 The 40’s of this release are where they really hit their stride. Try to trade for those ones.

A: This looks like pure sunlight and running through a field of cattails on a warm summer day. The carb was perfect and crackled in wispy foam that hung around like a bottle of Sprite mixed with some pineapple Fanta. Amazing radiance to the center and it just feels refreshing to look at, suddenly being underwater on your mortgage and living in shitty ass Kansas doesn’t seem so bad once you have this Berliner.

Things dont get more uplifting and likable than this beer.

S: This is a lemon bomb that again pushes the Sprite envelope with some faint haint, light musk akin to a sort of brackish aspect and a gentle saltiness. Insert hot rope joke here, and move on. This again has a light tartness to it and the acidity is more like a chaperon than the prom king.

T: This is so damn gentle and refreshing with the watery lemon aspect, wheaty backbone that is thinner than Keira Knightley. Again the acidity is a soft pat on the shoulder and serves to buttress the faint lemonhead mixed with water. The musk is super subtle and this is made to be crushed with a swiftness. A sort of Stevia sweetness closes out this banger and begs for another sip.

M: This is so. damn. thin. I can’t even communicate how crisp and refreshing this is to drink. You would put this in a waterbottle and go on a 30 mile ride on your Trek you fucking yuppie. This is lightly sweet and faintly tart, nothing is overdone but nothing is really done either. It is ethereal and feels like something you would drink if lost in the desert or while getting your cock pierced at Burning Man. Uplifting.

D: Off the fucking charts in drinkability, this beer is. The fact that this is a whale is tragic and no other beers in this realm come close in execution and balance. I loved the New Glarus Berliner, this is some Radio Rahim shit though, inimitable. You can squint your tastebuds while drinking Hottenroth but it still just isn’t even close. I could crush this by the case and still make it to my job at the Golden Corral carving station. You can be irresponsible as fuck with this beer and still have a modicum of responsbility. If they served this at AA, the meth users would be happy and perhaps a few less kids would get this asses kicked for leaving their bikes in the driveway. We can only dream.

When I finally got to try this, my face be all like

Narrative: “SIIIIICK ELIMINATOR BROTORCH!” Ah shit, they brought this guy again, god damn Tevin Jacobs. “Ahhh can’t wait to load this up with sick girls, grills, shots, schwaaaazeeeee-” Tevin began twisting lemons into a blender, making his salty sweet potation to refresh everyone present. He’s is trailing off again with what is debatably not even a real word. Why do they always bring this guy around? He is so irritating. “And THEN I WAS ALL LIKE this-” Oh great, now he is grinding all over my dad’s speedboat. He is offensive and I see him so infrequently but that drink he whips up makes it all worthwhile. The lemons and limes get all these women so relaxed. They always say he’s great to have around at parties but just a few minutes of this Tevin and I am already sick of him. “SO I ALWAYS TELL CHICKS LIKE OK THINK ABOUT IT, you could never get PREGNANT ON ANOTHER PLANET BECAUSE THE gravity is all different, it would straight pull it down and-” Jesus, the refreshing motjito is hard to justify, but makes me feel refreshed around this asshole. I just, I can’t sit here and listen to this butchering of science. “Yo bro, can you hit me with a Michelob Ultra? Tryna hit up the gym sitch later!”

Go ahead, laugh at the fox. It only shows your own insecurities.

Alright, enough beating up on other states, time to enjoy winter in Wisconsi- ok fine, on with the review.

A: Well I get the weizen, there’s a deep gold hue like those peddlers in those rich diverse ethnic markets in Milwaukee [FN1 never been there.] It has a rich foamy frothy carbonation that is astounding. Literally, I polished my monocle and pulled a double take at the soapy overflow. Been polishing my monocle quite a bit recently.

S: This has a great cinnamon, clove, banana and belgian trappist ester finish to it. Smells like nana’s blanket that she cools pies upon. New Glarus burned me so bad with the Wisconsin Red and Tart that that Berliner Weiss and R+D Geuze brought me back to neutral, this might just win me over.

This beer makes me feel like I am the butt of an intelligent joke that I just don't apprehend.

T: This is difficult to describe because it’s like describing the absence of a quality to prove its existence, the old History channel/John Locke/every epistemologist way of things. I hope you are very perceptive because the banana and clo- its gone. That fast. This makes the taste of Rolling Rock seem resonant by contrast. I feel like posting a Craigslist missed encounters ad because the half second is so sweet. But, then again, my inbox is already full of so many penis .gifs, I will refrain.

M: Well, imagine the evanescent taste and- yup the mouthfeel is gone. Are you even drinking beer? It’s an exercise in rationalism, its like ding an sich, I dont know if this beer really exists because it is a ghost and I have almost no faculty to apprehend it. Grasping at the watery malt phantom is frustrating and perhaps brilliant marketing because the glass just menacingly drains. I am like the reverse version of Mickey Mouse in Fantasia, you know when he, wait what?

It aspires to greatness, but, something is off.

D: I guess extremely? This depends on if you enjoy your beers seen and not heard [FN2 tasted.] You could seem like a complete champion drinking a case of these at a party, providing you take your old cranberry pills first. Just, lots of urine, that’s basically what I am getting at here. The sweet lil honey ester kiss is like a 5th grade smooch and then, boom gone, and you’re left with empty beer bottles, just like 5th grade. Cursive is hard.

Narrative: It wasn’t that Devin Manning had a disinterest in the corporeal world. I mean sure, he wanted to pass on into the aether, but his attention span was so limited that “fulling his higher purgatorial obligations” just seemed so daunting. “Charles? Come try this pie for me, mmm careful!” Devin would swoop over and inhabit Charles’s mouth for a moment, and then rush away to investigate what was just purchased at Sharper Image. “GOD DAMNIT DEVIN,” phastasmagorial overseer translord of ward IV, aka Ghost Boss, boomed through the house. “Devin, fulfill their palates with flavor, you’re clearly not trying. Do you even give a shit about heaven? Do you want to meet Beatrice?” Devin just gave a weak mealymouthed reply and pushed chinese checkers balls around idly. “Ahhhh, I dont care if this family dont got enough sense to use coriander or boost protein dishes with boullion stock, WHAT’S THAT MY OLD BUSINESS!” Ghost Boss looked down his will o’ the wispy brow and stated solemly, “Devin, you are a flavor ghost of the lower order, you give people with very little taste a fleeting glimpse at greater things, you are fulfilling a debt for listening to Semisonic and the Spin Doctors. You see you lived a life completely devoid of any real taste.” Devin stopped listening and began rifling through a nearby drawer of Dubstep cds. “GOD DAMNIT THESE PEOPLE HAVE NO TASTE.”