Ok, let’s give some context to this box set series since most people have more productive things to do with their time than monitor rare ass beer releases. Lost Abbey is releasing one of these beers each month, available for consumption onsite only, in limited numbers. You cannot take bottles away, don’t ask or you’ll get socked. You can enter a lottery to win a box set of all 12 tracks, to be sold at the end of the year. So, basically massive whale box is what we are looking at here. Here is July’s track: The Devil Inside. 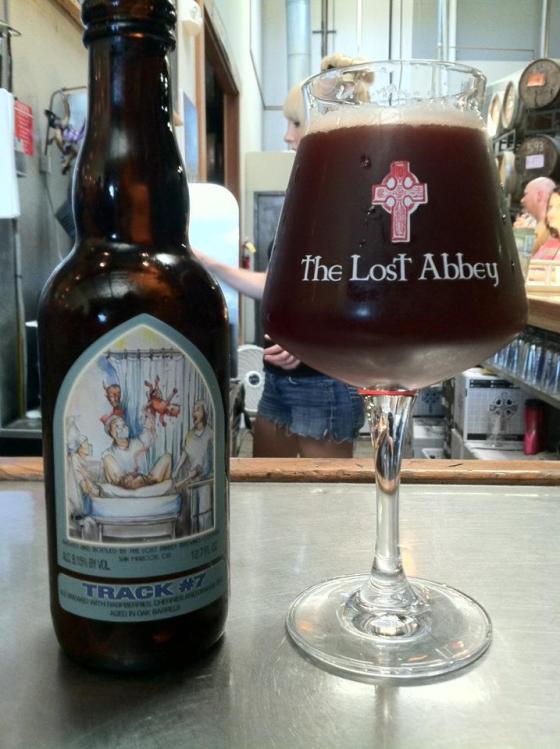 If you have ever drank too many lambic/sours, you have felt the devil inside.

Here’s what the brewery has to say:

“We went back to the well for this one. It is a remix of our classic Veritas 006 aka sangria. We have raspberry and cherry providing the bulk of the fruit texture over a sour yellow base beer. To this we also added some orange peel and freshly zested mandarin orange zest as well. The beer finishes with a nice tannic finish and is truly a refreshing riff on a Lost Abbey classic. ”

A: This is a deep crimson meets magenta look that is inviting like a Lisa Frank binder but menacing like the velvet curtains of that touchy camp counselor you remember too well. The lacing is minimal and the bubbles are light but crackly with acidic rancor. The whole thing looks and feels like a Prince concert, and the elegance is maintained.

When the server dropped off the bottle and radiant glass, I was all like-

S: This has a huge acidic and berry profile with notes of blackberry, raspberry, cherry, currant, tart plum, and a nice citrus finish. It is evident that you will need to switch to PPO dental insurance for drinks like this, because the acidity is nothing to fuck with.

T: This crackles with a juicy acrimonious burn along the gumline that brings some awesome fruits to the bouquet. There’s cherry tannins, that raspberry dryness that you remember from Framboise de Amarosa, then slinking in sheepishly is that fruit profile from V007 that we previously visited. This doesn’t feel devilish, necessarily, but it has a deeeeep burn like those cross-fit box jumps you are so sick of hearing about.

Take fruits and make amazing beer with them: FUCK YOU SCIENCE.

M: This is incredibly dry and tannic like a red wine that has been juicing and using n0x for a sick deep pump. There’s a juiciness at the outset that brings a nice sweetness to accompany the acidic profile. You might get some ulcers from this, but it’s a way cooler story than the old “oh I worked at a failing car dealership” song and dance that burns most people out.

D: This is exceptionally drinkable if you are one of those kinds of people that can play Lifeforce or Rock Band on Expert for hours on end. It is relentlessly punishing but incredibly satisfying. I recommend winning the box set and then taking this one to Jamba Juice and then just sip on this while looking at the other suckers getting fruits in their boring, traditional way.

When you have enough hardcore sours, you start to understand the nature of the universe.

Narrative: Mikayla “Raven” Collier was not adjusting well to 8th grade. Her parents had moved 4 times in the past 5 years and it had taken a toll on her frail psychological profile. As a result, she turned to the all too common practice of adolescent necromancy. The PDF Necronomicon file that she downloaded was substantial and she printed it onto parchment paper from Staples, to give it a genuine luster. She assembled her other awkward friends, the girl with the inexplicable orthopedic back brace, the large girl with a massive lisp to match, and the Samoan girl from her P.E. class. The children had no materials from which to summon the dark fugues of the past. It was almost impossible to find solid alchemy materials in a track home in Charlotte, North Carolina so they made do with what was around the house. Raven found a box of produce from the monthly fruit colelctive that her “lame ass” parents subscribed to and produced the most evil fruit of them all: the unholy durian. After crushing copious amounts of blood pulp from raspberries and cherries, Samoan girl lit the incense. She brandished a Cutco knife, uttered the scrawling script in papyrus font, and cut the foul blackness open, releasing the odious soul of the durian, crusher of mankind. The eyes of the pubescent girls watered and they nodded, this was still much less shitty than Sadie Hawkins.

2 thoughts on “Lost Abbey Box Set Track 7 – The Devil Inside, Devil on the Inside, Clean on the Outside”