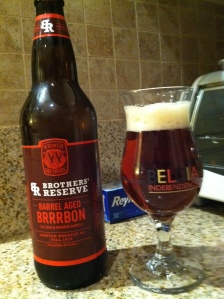 Parchment paper is peeping on Brrbon so hard.

Here’s a beer Oregonians actually freely share. This beer didn’t get the best reviews but I feel that it’s pretty legit, by no means too legit to warrant quitting.

A: It has nice shiny, new penny look to it with some spider webs on it like at old man Wilkerson’s house, but it looks inviting with a nice moderate translucence to it. The color actually LOOKS like a nice bourbon, I would go grab a Buffalo Trace shot and show you but, it’s all the way over there and you have the ability to press cntrl+T at any time you lazy ass.

S: This is really muted on the nose and you get a tiny hint of bourbon, like a homeless man was in your underwear drawer but you cant quite be sure. The caramel and brown sugar just lights up and smells amazing. The alcohol doesn’t grind all up on your junk, it just eases up and does a nice lil ABV two step. 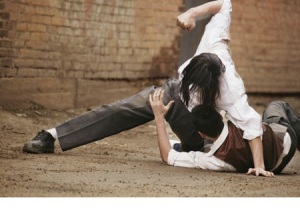 The dude in white is bourbon, your palate is getting its shit rocked.

T: This has a nice initial oakiness that would be mistaken for hops if it wasn’t so warm and soothing like a negligent ass Thermaflu or something. It sweetens up with some sweet molasses and brown sugar that washes away instantly. This tastes a lot better than I was expecting and upholds the solid lineage from the recent limited releases: Galaxy Barleywine, Pear Braggot, etc. Drop the $10.99, it’s worth it.

M: It is surprisingly light and feels like a strange ninja barleywine. Or a baby old ale with all the oak going on. It’s pretty enjoyable and reminds me that I live in america, where you can put bourbon in a beer and drink it casually, with lunch, brunch even, heck, before your first day as a bus driver, who knows. Moral of the story is that the light character, deep bourbon and generous oakiness make this an awesome beer. Forget what Jamiroquai said, the future is not made of insanity, virtual or otherwise. 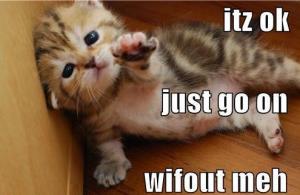 D: This is incredibly drinkable and, may possibly be the only way that I will ever win at Words with Friends. You can play some wacky 9.4% abv tricks on them and watch them announce some really obscure things at the upcoming X-mas party. I had no trouble putting it away, and the average joe will say it tastes like “A strong…Newcastle…or whats that expensive…Chimay…yeah like sugar Chimay.”

Narrative: The old distillery, a county institution, just didn’t feel right, what with it being right next door to the local elementary school. Three recesses a month the kids would run in from kickball, gagging from the smell of fermenting sour mash. “Ms. Berkowitz, my eyes feel like Home Depot!” the kids would bemoan. It was many a time when a Nerf Screamer landed square in beds of spent mash, never to be retrieved. The smut that the old grizzly distillers left about was not insubstantial. Somehow, the synergy of the two, what with one destroying people’s lives, providing a solid 7 year old product, and the other being the distillery, seemed to somehow work. Jonah Wilkenstein watched in dismay as his baseball cascaded over the fence and landed in a caustic old barrel. “Now that Babe Ruth ball is gonna smell like Uncle Ira, I dont even wannit.”